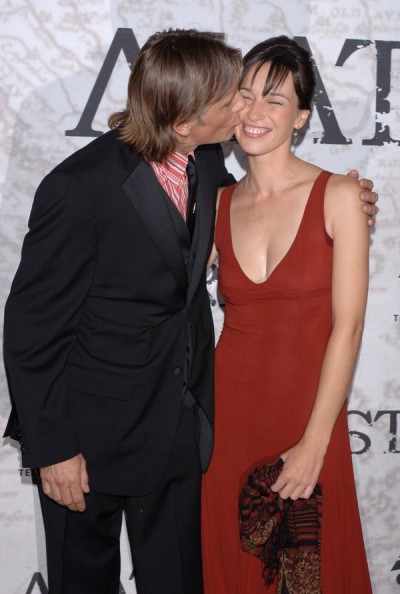 Captain Alatriste, embodied by the amazing Viggo Mortensen, drew his sword in
the Gran Vía Madrileña (in front of the Palacio de la Música), or fired the first shot to start showing the movie that is expected to have record attendance. The producers are praying about it. Because the movie directed by Agustín Díaz Yanes (Nobody Will Speak Of Us When We're Dead; No News From God), and based on the fascinating historic novels by Pérez-Reverte, cost no less than twenty four million euros, the most expensive movie in the history of Spanish cinema. Not that the team, director, and actors have no responsibilities. And they had them in the Gran Vía...

Viggo Mortensen, the look of a hero

The heat (it was very hot!) could not silence the desire for a picture of the hundreds of fans that surrounded the movie theatre. And they had it all, like the cast of the movie. Men were very well represented by the heroic touch of Viggo Mortensen, Eduardo Noriega, Eduard Fernández, and Javier Cámara (Javier Bardem, Juan Echanove, and Unax Ugalde are currently filming in Colombia). The ladies were touched by the grace of beauty. There were: Ariadna Gil, in Valentino red, but with a dress by designer Kotana from Mallorca; and Elena Anaya in a small silver Gucci dress.

They were there to support their own work, but others were there to support them. And to clap after the two plus hours that the film lasts. There were politicians (with the presence of the President, Jose Luis Rodríguez Zapatero, and his wife, Sonsoles Espinosa; the mayor of Madrid, Alberto Ruiz Gallardón, did not want to miss the occasion either); there were friends from the press (Iñaki Gabilondo and Mercedes Milá, among others); and colleagues from the Seventh Art and other show business people, like Pilar Bardem, Fernando Trueba, Alberto Caballero, Vanesa Romero or...David Bustamante with his new wife, actress Paula Echevarria, in their first public appearance after their wedding.