Viggo brings hundreds of Leonese people into the streets

By Marta Cuervo - translated by Margarita 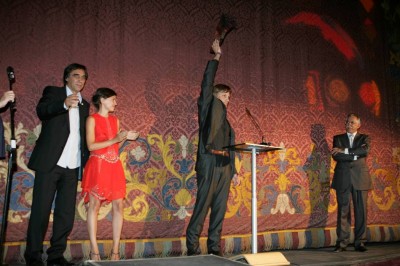 Alatriste: León Premiere 9.1.2006
Image Norberto.
© Diario de León. Used by permission.
From the early hours of the afternoon, hundreds of people waited at the Emperor Theatre to see Viggo Mortensen up close and personal, as he arrived in a car decked out with Leon's flag.

Screams, tears and almost 2,000 camera flashes going off every second. 45 minutes late, Viggo Mortensen arrived at the doors of the Emperor Theatre, accompanied by the film's director Agustín Díaz Yanes and one of the lead actresses, Elena Anaya. The famous actor got out of one of the first cars, bearing a Leonese flag that he takes with him wherever he goes, and personally made sure this particular vehicle was decorated with. Viggo confesses that he is in love with the city and its people and he doesn't hesitate to shout it to the four winds, with a special shine in his eye that verifies the truth of his feelings.

The expectant faces of Captain Alatriste's fans held irrepressible emotions. A tidal wave of humans blocked the entrance to the main stairs of León's theatre. It was almost like an army in itself, equipped with weapons (in this case cellphones, cameras and video recorders) to capture, if only for a few seconds, his revered face.

Fans from every corner of the planet spared no expense or effort to be able to come and see Viggo Mortensen in the flesh, from any distance they could manage. A group of women from China continued their vigil, after failing to obtain tickets: at the beginning of the movie, they made sure they were the first people to see him exit the building.

There were also people from France, Portugal and Germany. A young German woman arrived on Thursday to get her ticket to the screening, then she travelled to Madrid for the pre-premiere festivities, and today she was back on the road again to be one of the privileged people admitted into the theatre in León.

Even though there are many opinions on the film, (the majority of them were very positive), the undeniable fact is that the patio, the balcony, the streets and every single seat were overflowing.

During the screening of the movie, people couldn't contain their emotions. They applauded without ceasing, screaming their feelings for the attractive actor and holding up banners.

The climatic moment was when Viggo Mortensen defended the theatre's right to remain open and praised the Leonese people before promising to return to the city.

That's when the audience truly lived a moment's fulfillment of their hopes and dreams.