Viggo Mortensen now considers himself an adopted son of León

By Marta Cuervo - translated by Margarita 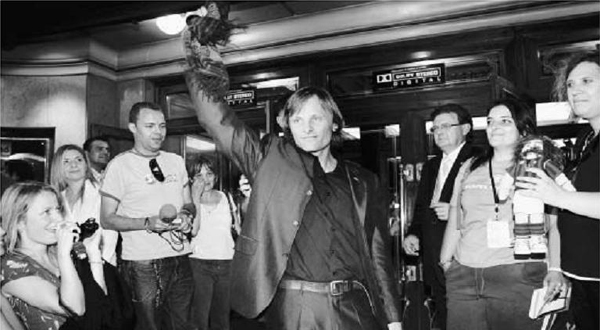 Alatriste: León Premiere 9.1.2006
Image Norberto.
© Diario de León.
Like a true brave squadron captain, Viggo Mortensen defended the need to keep the doors of the Emperor Theatre open (it's slated to close at the end of this season.) His arguments for perpetuating its existence: the beauty and majesty of the building, which he said impressed him in the same manner that the Leonese province and its people did.

Viggo now considers himself an adopted son of the city and, jokingly, compared his speech to the bond and honesty that exist between a father and son. He excused his remarks by reminding the audience that sons and fathers often find themselves in such a situation, where the sons don't always obey the advice of their parents.

Before the star-struck audience, he made another confession, this one about how he hoped to return more often to the city that he 'always carries in his heart,' and which he feels a very special affection for.

At that moment it really did seem that the old walls of the theatre were about to come down, but not because someone wanted to obliterate it and replace it with a newer building, but because of the emotion that was displayed when 4,000 hands applauded in unison.

Viggo Mortensen's affection for León is a shared sentiment.