By - transcription by Graciela

Image Cuatro.
© Channel 4 TV (Spain).
Reporter: Here we are with Eduardo Noriega, and tomorrow is the premiere of Alatriste; and with Amalia Enriquez, who was with Viggo Mortensen this morning...

Amalia: And he said something bad about Eduardo...

R: Is that true? But Viggo is a very good person!

Amalia: Listen to what he says...

Viggo: Eduardo could easily do very well in the US, if he wants to. I know that he speaks English well; he is a well read man, intelligent, and in this movie he plays a very interesting and difficult role. At the beginning we see him, and we think that he is all pampered, a 'grande' (important person), and he is a bit treacherous and vain, and all those things that maybe we don't like; and during the 20 years that go by, he changes, he has a nobility regardless of his social standing. It is a very interesting character, and he played it really well. A very good colleague. I had a good time with him. He has a good sense of humour.

(Eduardo then talks about his career in Spain and America.) 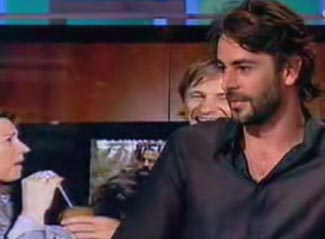 Image Cuatro.
© Channel 4 TV (Spain).
Amalia talks about Viggo again and how he transformed himself into a Spaniard working on his accent...

Eduardo: Pérez-Reverte says that Viggo is Spanish; he has become a Spaniard.

Amalia: I asked him what he did with his accent during the filming and he told me...

Viggo: I'm freeing myself from the chains that I got myself into, and very willingly by the way, to 'tame' the normal accent that I have. There was a very nice guy in the team that was from Rosario, Argentina, but every time that I heard him speak, I just fled. We silently shared maté in the morning, but like this (takes his finger to his lips and "shushes"): Don't talk!

Amalia: Because the accent soon gets stuck with you. He (Viggo) invited me to drink some maté, and he laughed quite a bit about my face...