'Alatriste can be seen as a thesis on pride'

Source: Cinemanía
Middle-earth's hero unsheathes his sword in Spain's Golden Age and brings guts and humanity to Arturo Pérez-Reverte's character. He assures us that he's here because he got lucky. We don't believe him. 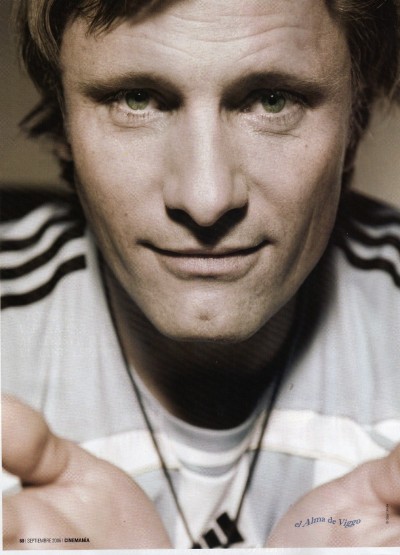 Cinemania - 9.2006 Alatriste puede verse como una …
Image César Urrutia.
© 2006 Cinemania.
It's him. Catch him. He can shave his moustache, get rid of the hat and the cape, he can even wear that shirt with the Argentinean football team on it, but he can't fool us. Aragorn has turned into Alatriste. And Alatriste is standing here, in front of us, disguised as Viggo Mortensen. It couldn't be anybody else. Without him, there wouldn't be a movie.

It's not the first time that Captain Alatriste gallops - excuse me, that Viggo Mortensen (New York, 1958), travels through Spain. Ten years ago, when he was still unknown, he starred in My Brother's Gun and began a career which has taken him from the remake of A Perfect Murder to Peter Jackson's Middle-earth. A success. Nevertheless, Mortensen, raised in rural Argentina, in a Danish family that then moved to the United States, seems to have been born modest. Completely devoted and sincerely proud of his adventure in Spain's Golden Age which Agustín Díaz Yanes has recreated, he speaks languid Castilian, with traces of an Argentinean accent, and exudes a tranquility that doesn't seem likely to have originated in Madrid's dark alleyways during the Austrian reign. But, just in case, it's best not to drop our guard. Careful, Alatriste unsheathes his sword!

How does a Hollywood star arrive at a Spanish movie?

I'm here because of luck. I was sent the script through a mutual friend that Tano (Diaz Yanes) and I share, Ray Loriga. I read it, I liked it, we met in Germany with a beer in front of us, I asked if it was happening and they said yes. I was very lucky, I really like the movie and feel proud of the work that we have done.

And what did Alatriste offer that attracted you?

I was very interested in the character and everything that surrounds him. I saw parallels with what is happening in the United States right now, but also with things from my childhood, with the gauchos in Argentina, Martín Fierro and the characters in his books and others that dealt with the gaucho lifestyle which greatly resembles the bravos (that's what he calls Alatriste's army), it had a lot to do with that, and his way of being, and the downward spiral of pride.

Yes. Alatriste can be seen as a thesis, a dissertation on pride and the evil consequences it brings. Something which is very nice to watch onscreen, but which is very sad to live, not only for individuals, but for the whole city.

Captain Alatriste is the quintessential Spaniard. How do you work with a character like that?

All good stories are universal, and for me the most interesting and fun part is the prepation, the initial study before filming begins. Tano knows it. I accosted him with questions about stories that didn't have anything to do with the day's work, because I was interested in everything that had to do with the history.

You plunged into researching your Leonese ancestors.

I always do the same thing. Even though I speak Spanish and was raised in Argentina, where I learned something of the history of Spain and the Golden Age, but from the perspective of a country which was a Spanish colony, I'm conscious that for everything to function well and for me to be more or less satisfied, I had to resemble any other Spaniard, I had to make an effort with the accent, to get the tone right ... I wasn't familiar with the books until I read the script, but it had to do with things that I knew in my childhood, with the gauchos and other things that interested me even without knowing much about Spain. I travelled through Spain, I shopped, I was lent and read all the books I could, including the ones about England and that age, the north of Europe, about what the Spanish were like, and especially about how Spanish soldiers were seen by foreigners.

Why is he such a special character?

Through Alatriste and his eyes we see the highs and lows, the rich and the poor, the pretty and the ugly ... everything that can be seen in a movie about what Spain was back then. It could have done with Quevedo, too, somebody who liked to hang out with guys like Alatriste. But the soldier, more or less educated, and intelligent, is nevertheless a normal person, he's not a great poet, he's a good swordsman, but he's not the best in Spain. That's the key: he's a fairly normal man, and through his eyes we see all of life pass by.

A life lived amidst the decadence of any empire. Any comparisons you'd make?

Already with the script, without having learned what I learned, I was already noticing the similarities. Alatriste was like a special forces sergeant in the US Army. Someone who has traveled to Panama, who has been in the dirty war in El Salvador, in Chile, in Argentina ...

How does Spain remind you of the United States?

Felipe IV isn't like Bush. Or we don't know, because we don't have recordings of his words and we don't know if he was so stupid. It's possible that he was. The truth is that travelling didn't really interest him, like Bush; he allowed himself to be advised by others like Olivares, as Bush does, and he wasted the resources of the empire, like Bush. What's happening today is a disgrace, and even though it's not exactly the same thing, it greatly resembles 17th century Spain. In the last years he has spent more than all the presidents of the United States combined, our foreign debt is incredibly high and life for the middle class citizen has worsened ... civil rights, suppression of public opinion and control of the media, armies everywhere ... It's an empire like Spain's, which is falling, and instead of doing it with a certain dignity or grace, it's causing trouble all over the place.

Alatriste is a soldier ... and a bullfighter!

I didn't know that Tano had bullfighters in his family (Diaz Yanes is the son of a banderillero), but that can be seen, it's there, in the subconscious part of the script. I've lived it since arriving here in San Isidro in 2004. We went to Las Ventas with Curro Vazquez. I don't know much about bulls, but I went many times and watched all the movies I could find, it wasn't so important to me whether the corrida was good or bad, it was more about the atmosphere and the toreros way of being. I wasn't looking for anything specific, just to surround myself with an atmosphere, a feeling.

All of the characters in the movie fight to survive. Has society improved in that sense?

There are many more distractions now, but like always, those who command, those who have power, want us to think that they're better. No, things haven't changed that much.

You're sharing cartel with the best actors in Spanish film.

I was aware that it was a very good team and an incredible cast. I watched the movies of cast members that I had not seen and was aware before beginning that it was a unique cast. If I had wanted to work with all of them I would have had to make at least 10 movies. I've been lucky and additionally I have scenes with almost all of them. But I always forget that. When it's time to go to work, you have to forget all of that and see what happens. You have to be prepared for what's coming. And in this encounter between men and women who suffer from pride, every day interesting things happen. For me, in any film, it doesn't matter if it's a big film or a two or three week project, the work is the same. You arrive, you prepare, you act. The pressure is the same, it's not more or less if it's Alatriste or a smaller movie.

Is it still so different to film in Spain instead of Hollywood?

Sure. Filming in Spain is different than filming in England or the United States. I had been here before and knew that at the beginning it seems chaotic compared to a North American movie, but it's just that everything has its system, its way of functioning, which I like a lot, that friendship, that chaos ... because from that chaos comes something less affected and more credible.

I was filming almost every day, with Tano, and the fun thing is to consider that almost every day a new character appeared, an actor, and it was a luxury. It was also that these actors were so incredibly enthusiastic about the movie: if it had been a dumb director, proud, who didn't pay attention or facilitate things, they would have said one thing on one hand, but deep inside it would be noticeable and everyone would have gone off in their direction. By the way, Blanca Portillo, who just won an award in France and is a great actress, had a couple of complicated scenes, very tough ones, but we ended up having a lot of fun. We came out dressed in the Seville characters' costumes (Blanca Portillo later confirms this story) and we had a really good time.

In the United States it seems to be harder to achieve that kind of an atmosphere.

It depends on the director. I just finished working on A History of Violence with David [Cronenberg], who is a lot of fun, but also, then William Hurt would show up, with everything he brings, and it was also a show. Also, Lord of the Rings was great because suddenly Cate Blanchett would show up, and she's so much fun.

We get the impression that without Viggo Mortensen there wouldn't be an Alatriste.

Noooo. That's not right at all. The captain of the ship is the director. Agustín Díaz Yanes has taken care of everything, he's surrounded himself with a great crew because it was necessary. There's some stuff from the books that isn't in there, but everything that's in the movie is what needed to be in there and is what is useful to the story. And that's what he does. We provide him with ... the material, no? And there are always small details to discuss, but there are many directors who don't know, or don't care, or because of pride it doesn't matter to them what a photographer can bring or a simple actor.