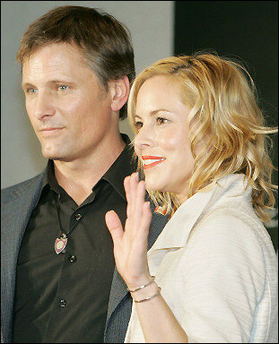 A HoV: Japan Premiere February 24, 2006
Image Toru Yamanaka.
© AFP.
TOKYO - Viggo Mortensen, who stars in the Oscar-nominated A History of Violence, said it was too simple to see the movie as a metaphor for September 11, 2001 and its aftermath.

Mortensen plays Tom Stall, a small-town family man who shoots robbers at his diner and instantly becomes a hero, only to come under intense scrutiny later about his past.

"People come out and say it's obviously about the United States and violence in the United States or maybe it's about foreign policy since 9/11," Mortensen told a news conference in Tokyo ahead of the film's Japanese release.

"Well, you can write a college paper about any of those things, but it's not limited to that. He's too good of a director and it's too good of a story," he said of director David Cronenberg.

"If anything, maybe the audience on some level, maybe subconsciously, sees the movie different than it would have had they seen it before 9/11," he said.