The Terrible Lure of Violence

By Daniel Ferullo - translated by Margarita 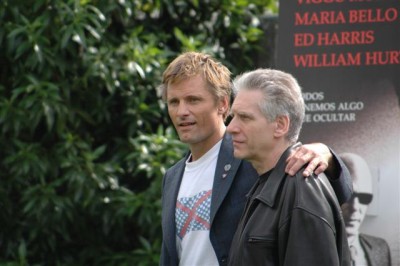 A HoV: Sitges Film Festival - Spain October 17, ….
© Ayata. Used by permission.
In Barcelona, Spain, David Cronenberg and the actor Viggo Mortensen spoke with El Siglo about A History of Violence, a movie directed by the former and starring the latter, an American who lived in Argentina for several years.

A History of Violence, recently screened in Tucumán, is a lucid reflection upon violence, particularly in extreme situations.

Cronenberg is a Canadian and almost all his movies are made in his home country. Calm, serene and soft-spoken, he is a director with one of the most interesting filmographies around, always dark and obscure in their themes. Mortensen, a New Yorker raised in the Chaco and Buenos Aires, speaks perfect Spanish with an Argentinean accent, and is known for his devotion to the San Lorenzo team.

The two have an excellent relationship and share a good sense of humour, which is reflected during the interview. Both express interest in working together again in the future.

El Siglo was with them in Barcelona during the annual Sitges Film Festival, where this exclusive interview took place.

In your movies sickness is always present. You also often have schizophrenic characters in your movies, split personalities, like in Spider, Crash and The Fly. Do you consider violence a sickness?

Cronenberg: My movies are centred around the human body. The human condition has always interested me and to study it you first have to talk about the body. Mutation, sex, perversion, illness, death and technology, too, are strictly human. All technology has been created by man and is an extension of himself. I don't consider violence to be an illness or a virus, rather something innate in a human. It's in our DNA. It's too bad it isn't a virus, because then perhaps there would be a cure. Sadly, that's not the case, and even though intellectually we reject it, we live side-by-side with it.

Mortensen: The film is too good to reduce it into terms of mere violence. It speaks about the human condition and how ambiguous we are. I agree with David on this: human beings are complicated. A man can be the most violent person in the world and yet still on occasions act with compassion and in a caring manner.

Cronenberg: As happens in this case. It's not about publicizing or criticizing violence. It's about observing it. There is a lot of violence in the film and I try to see the reactions to it. Someone seeing the movie knows that the violence isn't real, so that gives us a certain measure of peace and we can enjoy it. But it's also relevant to find out why 'we like' such violence or why we find pleasure in it.

Another recurring theme in your movies is identity. How did you work with the dualities of personality?

Cronenberg: Identity is a very fragile attribute that requires work to maintain. Every day when we get out of bed we have to remember who we are, what language we speak, where we live. It's an ever-present subject, in one form or another, in my movies.

Mortensen: I never saw the character - not when reading the script or playing the role - as two separate personalities or men. We agreed right from the beginning that he would be one character. We spoke with David every day before filming and said from the beginning that the character would be one person with multiple identities. It would have been easier to do a Jekyll & Hyde transformation, but no. He was always going to be one person with different attitudes. Each one of us does the same thing every day. And if violence enters the picture, it does so with consequences. Also, the violence is shown in a crude and direct manner, without choreography or music in the background to make it more dramatic.

It's a dry production, without frills or superfluous camera movements, or slow, interminable rivers of blood. The action scenes are short and scarce. It's about getting as close to a person as possible in order to do the most possible damage. Why in such a brutal manner? Because it's that much more disturbing.

Many critics commented on the movie being a critique of American society. Did you set the movie in the U.S. for a specific reason?

Cronenberg: In order to be universal, all artists have to be specific. That's why I set it in the U.S., because of the special relationship the country has with weapons. The scenery of the Midwest also seemed very appropriate to the story. But the movie's content can be applied to any place in the world.

Mortensen: I think it's unfair to say that the movie's about the violence prevalent in the U.S. It's very easy when you're in Europe to say, 'look how violent those Yankees are'. Artistically, it can't be reduced to those terms. The film talks about violence in human society, be it English, Spanish, North American or Chinese. It also shows that we are capable of reasoning and trying, even if it's in a clumsy manner with poor results, to be a different way.

How did you create the character? Was Cronenberg helpful as a director?

Mortensen: The most enjoyable part, and what gives me the most satisfaction when making a movie - something which is not always achieved - is working with people like David. He's a subtle director, who values what an actor can contribute. He doesn't tell you what to think - like Lars von Trier, who tells you the answers - and he doesn't even tell you what questions to ask. He tells a story and allows you the chance to reflect. He provokes. A lot is told without words. When I read the script I thought it was interesting, but full of pitfalls. I didn't accept the role until I knew who would be directing...

I invented a life for the character - where he was born, where he lived - and travelled to the places to learn about them.

Cronenberg: You didn't mention the people you had to kill to create the character. [laughs]

Mortensen: David told me that as long as he didn't know them, it was fine. [laughs] The U.S. has always been very violent and you have suffered from being its neighbour. [laughs]

The movie is based on a story that involves violence, but not sex. Did you read the comic book before making the film?

Cronenberg: It's important to note that I didn't know it was based on a comic book. I hadn't read it. There wasn't sex and I added it in. [laughs] If somebody had made a movie based on the comic book, it would be very different. When twenty years ago I directed The Dead Zone I didn't write the script and since then I don't worry so much about the text. Moviemaking is all about teamwork.

Mortensen: The sex is an important theme. This movie is basically a love story. In all relationships there are power struggles, including people who know and love each other. The plot would be lost if we didn't know the marriage intimately. The transitions in their relationship are vital to understanding what happens.

What projects do you have going on right now?

Cronenberg: I don't know what my next steps will be, but if the possibility of another role for Viggo appears, I'd hire him.

Mortensen: Thanks. [laughs] I don't have any plans. I want to be home with my son. It's the same story as always: When we want work, there isn't any. And when you decide to rest, the devil knocks at your door to offer you a role.

Viggo Mortensen's new movie, Alatriste, premieres in October 2006. Considered the most expensive movie ever made in Spain (it cost around 24 million Euros), it's based on the novels of Arturo Pérez-Reverte about Captain Alatriste, a mercenary and adventurer in the 17th century. During the filming, Mortensen had to work hard to get rid of his Argentinean accent and replace it with a more Spanish one.
Top of this page
Last edited: 1 February 2006 04:50:27