Ol' Blue Eyes Is Back 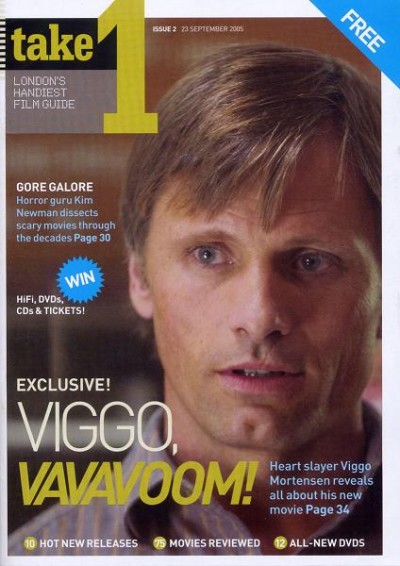 Image Take1
There is something very "other' about Viggo Mortensen. David Cronenberg, his director in A History of Violence, says that he was drawn to the actor because of this intangible something that could make him both a charismatic leading man as well as a quirky character actor. This otherness has made Viggo Mortensen not exactly a household name, rather more a scene-stealer of richly varied roles - Aragorn in The Lord of the Rings, the genteel doormat to Nicole Kidman in The Portrait of a Lady, Demi Moore's commanding officer in G.I. Jane, the con-man lover of Gwyneth Paltrow in A Perfect Murder. Now, in A History of Violence, his 40th film, he plays a small-town Middle American family man whose life changes when he thwarts a robbery.

When we meet, Viggo is dressed in a checked suit and the T-shirt of Argentinean football team San Lorenzo, drinking maté tea (green tea drunk all over South America to prevent altitude sickness) through a straw from his own wooden thermos. An interesting choice as we are at sea level. He smiles slightly, twiddling his handle-bar moustache grown for the movie he's shooting in Spain called Alatriste in which he plays Captain Diego Alatriste, a soldier turned mercenary in Spain's 17th century Thirty Years War. Mortensen is attractively eccentric, all the more so as he has not played up his good looks - relishing the interesting roles as opposed to plumping for the obvious money-spinning pretty boy parts. 'I've been told that I'm back and gone so many times it just ceases to concern me,' he comments. 'I mean, I don't really give a s**t. My first goal isn't to find a movie that will pay me heaps of money and make me famous. It is to find something that I'm comfortable with, like this film where the script is as simple and streamlined as it could be.' He expands, 'It was a film I felt I could really lose myself in. David (Cronenberg) doesn't tell you what to think. He opens a door, you walk into a room, but he doesn't answer questions. It's easier when a filmmaker tells you what to think, but it's more rewarding when you have to think for yourself. However, it is also dangerous when you think for yourself!'

A History of Violence is a straightforward semi-Western and very noir story about a happy family and the thin barrier between normality and nightmare.

'It is an American Dream family that explodes,' comments the actor. In this deviously plotted tale of danger set against a warm, picture-perfect background, Maria (The Cooler) Bello plays Mortensen's lawyer wife whilst William Hurt and Ed Harris play baddies with a few theories of their own about his character. 'The character I play has been violent and the characters William Hurt and Ed Harris play correctly assume I still have that in me,' he says, 'but they make the mistake of assuming that I cannot change, that I have not changed.

I don't think this movie is necessarily about the US or about violence per se. Violence is universal, it's a big factor of life in every country and this film, I think, says that violence exists and it's kind of futile to pretend it doesn't exist as long as there are human beings. But it also says that you have free will, that you can question your own actions and change the way you behave.

I am very anti movies glamorising violence. One of my first questions to David was: what are you going to show? In the hands of a less gifted filmmaker, they'd have made a mountain out of the violence and shot it beautifully in slow motion and all that. But violence is not pleasant to look at and you'd have had a movie you wouldn't have thought very long about afterwards. David wanted to do something that showed violence that happens quickly, unexpectedly and has immediate, long-lasting consequences.

My character's reaction to violence was based on training videos of how to react when attacked in the street. I was also lucky to have had some technical practice on violence in the stunt work I did in The Rings otherwise it would have been a really tough shoot.'

Mortensen, 47 next month, is an actor, poet, painter, photographer, jazz musician and virtuoso horseman. He clearly doesn't feel that at home being interviewed and rubs a small blue tattoo of the letter H on his right hand uneasily. Most of the time as an actor, he says, one is alone and perhaps that's the way that suits him best.

Born in Manhattan, he spent his formative years in South America, where his Danish farmer father managed ranches and farms. He later lived in Denmark and speaks English, Spanish and Danish fluently, and Norwegian and Swedish well enough. He has made films in Spanish and worked as a translator for the Swedish hockey team at the 1980 Winter Olympics. A familiar figure on the LA punk scene, he was married to Exene Cervenka, former lead singer of the band X, and he has a teenage son, Henry, who he says is his best friend. Mortensen's identity is rewardingly unclear-cut. He says he prefers it that way, exhibiting his photographs and paintings and writing books, playing music, far away from Hollywood, where he has worked on and off since 1985, when he made his first film, the Amish drama Witness with Harrison Ford.

'The privilege of a lifetime is being yourself. I can't tell you what I'll be doing in five years or five months. I don't feel I need to know. I have my own identity, my own life.' He adds, 'Identity is another important aspect of A History of Violence. I play someone who's escaped from somewhere to become someone else and create a new identity. It is one of the basic acts of human existence that we can create an identity. It's not a genetic thing that's given to us as an absolute like the colour of our eyes; it's something we are involved in creating as we live our lives by the choices we make.' He says, 'If you accept that as a reality then you have to accept the possibility that you can create a new identity, not just with credit cards, but become a different person. I am happy with who I am but my character is A History of Violence wasn't.'
Top of this page
Last edited: 6 November 2005 04:48:27
© Take1.