Viggo Mortensen: Everything Is Power

By Nicholas Crousse - translated by Shu 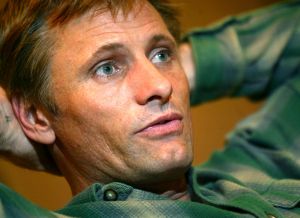 Image Peirre-Yves Thienpont - Belguim.
© Le Guide 2005.
The handsome dude from The Lord of the Rings was on his way to Ghent. In A History of Violence, David Cronenberg reveals his dark side.

It's impossible to make the distinction: the poised man with the frank expression that you have in front of you has exterminated the baddies of the Uruk Hai and liberated Middle Earth. He's the lord of the rings. He's in Ghent and this time he's found his leader in David Cronenberg. The two men, both in high spirits, are here to promote A History of Violence. Viggo Mortensen, who is obviously pleased to express himself to a French language magazine, surprised us by responding to our questions in French with a touch of a Quebec accent, which bears witness to the time when he, a man with Danish roots, lived alongside the St Lawrence.

After The Lord of the Rings you're now in the very personal world of David Cronenberg. It's a bit like going from water to fire, isn't it?

I didn't think about it in those terms. I didn't say to myself: it's an independent film or a film d'auteur. No, it was because it was David Cronenberg.

Cronenberg's films bring together some savage personalities. Within that, you take the role of a man, Tom Stall, who suffers something like a split personality. Is he a monster with a human face?

No, he's like everyone. Everyone has secrets. Everyone in life shows what they really want to show. Every day one is a little different. One changes all the time. One is never the same. One is always becoming someone else. Or in any case, a different version of the same person. And that's what interested me about Cronenberg, who has a leaning like very few other people towards the human condition. It's what makes him a great artist. People think that with A History of Violence, he's signed off on a more mainstream film. I don't agree with that. What I see here is like a doctor who wants to see what there is beneath the surface of things. Who lifts the veil on civilisation, on politeness, on society. When you look at what's beneath, we're animals (laughs).

To me, Lars von Trier is more of a provocateur. He does agit-prop, which isn't Cronenberg's style. Cronenberg doesn't ask questions, and he doesn't give answers. It's up to you to ask them if you want. Everything is there. With this film, one doesn't hesitate to ask questions. So it's a good film, that provokes reflection and discussion.

A History of Violence is about man's violence.

Still, if there is any justice, it's that of violence. Whether one is in Belgium, Denmark or the USA, we're all equal in the face of violence. Violence exists because there is human society. But our intelligence helps us to avoid this violence.

There's something of parody towards the end of the film, which almost turns violence into a mockery.

That's the nature of the personality of Tom Stall's brother, who bullshits him to try to re-recruit him. He does this because he knows him. There's a very strange dynamic in this family. In using humour, he's trying to control Tom. It's very dangerous. I think that this film is about power: between a man and a woman, between a man and his son, between two brothers. Who has the power? Who controls who? Perhaps no-one, but there are times when that changes, when it passes from one to the other.

Many New York artist/activists are coming to meet with each other around a Ghent festival ('Fusebox') with the aim of expressing their anger towards the Bush administration. What do you think about that?

There are different ways of debating. I can identify with their anger with regard to the current situation. But you've got to try to stay open within a controversial debate. If you express your anger harshly, the only people who are going to sympathise with you are the people who already agree with you. You don't get far with that. I'm not taking aim here at Patti Smith, whom I regret moreover not having heard here in Ghent and of whose intentions I read in your newspaper (Le Soir of 15 October). She said a lot of truthful things, and a lot of them were constructive. But there are still questions. Now, apart from anything to do with of her, I want to say that if you're going to shoot your mouth off, you also have to be heard by.....

Yes. You have to force yourself to formulate things in such a way to be listened to by them as well. Without diluting or compromising your message. But if I try to convince you by shouting 'you **** bastards', you're not going to make the effort to listen to what I want to say to you. If, on the other hand, I approach you asking you if you really want to listen to what I have to say to you, you'll put your foot in the door.

You have a great passion for reading.

I read a lot, that's true. Karen Blixen excites me, among others. During the filming of The Lord of the Rings, I read all of Tolkien. I discovered his Nordic mythology, his romantic poetry. I love poetry.

It's not fashionable to love it.

Oh I know. I've done poetry recitals for a long time, and before The Lord of the Rings there would be maybe 40 people when I read. With the success of the film, there are more people at my recitals now. That's the reason that I started my publishing house, Perceval, to publish books of poetry, but also of painting or photography.
Top of this page
Last edited: 1 November 2005 14:12:45
© Le Guide.