Viggo Mortensen: "I'd like to work in Spain again"

By L Monjas - translated by Paddy 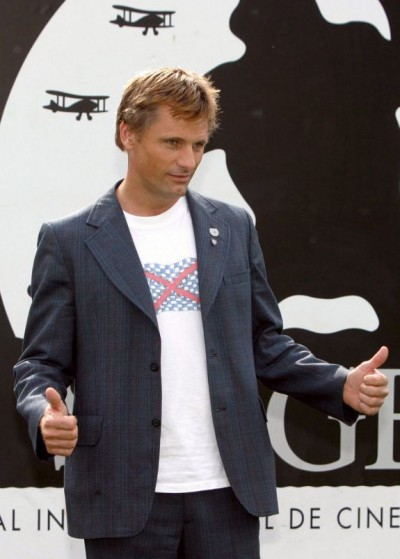 "Having done the Lord of the Rings trilogy has permitted me to work with David Cronenberg - A History of Violence - and become Diego Alatriste. I'm very grateful for the attention that people pay to me, I accept fame as a gift because that means the audience likes the stories I'm involved in", Viggo Mortensen says.

The attractive American actor doesn't lead the Fellowship of the Ring any more and he doesn't carry the sword in his hand either, but he's drinking maté at the luxurious room of a hotel in Madrid where he's promoting A History of Violence, which is released this Friday with 240 copies. The film, which closed the Sitges Festival and was shown in Cannes, is about a man with an obscure past who turns into a hero after an attempted robbery at his diner that brings to light a violent and dangerous past that doesn't seem to be his.

"We all carry the violence deep inside. It's inevitable that, sometimes, it comes out. What we have to do is to reason and reject it. My character is, like all human beings, quite complicated, because we all hide things, we have secrets and, if we think and imagine violent things, why aren't we going to act like that", asks this son of a Dane and an American, who openly confesses his empathy for the role he plays in A History of Violence.

"But that happens to me all the time. I prepare myself very thoroughly, at one hundred per cent until the shooting ends. Fortunately I have had a director like Cronenberg, who has paid attention to the performance, to every detail, even the most subtle. The camera picks up everything, and when a film-maker cares for the performance in the editing, the viewer also sees more than what is said and what is shown on the screen", explains this New Yorker, who is very satisfied with the last challenge he has dealt with: Diego Alatriste.

"I have spent quite a lot of time in Spain, travelling the whole of the country, visiting museums and making some good friends. During the shooting I have also taken some photos and have written some things. It has been a very positive experience, but you don't know what you have learned until some time passes, and sometimes it takes years. I have felt wrapped by my mates, by Agustín Díaz Yanes - the director - ... I had to do a good work because I was aware that all the cast was Spanish, there was an Italian actor who played an Italian and me, who also had to polish my Argentinean accent up", tells this performer who already is the main name in the film because Ed Harris and William Hurt play supporting roles.

"I have been very lucky. I know some day this will end, but I don't care. If I had been scared of it, I would have done twelve films after Lord of the Rings to take advantage of the pull. The success is good, I have lost anonymity. I like people, that's why I'm an actor, but a piece of music or a painting moves me more when I'm alone", tells the actor of Hidalgo, Witness, G.I. Jane and Crimson Tide, among other films.

Already without the big moustache he will wear in Alatriste, which won't arrive at theatres until September 2006, Mortensen tells how he is obsessive at work "because I cannot make a bad impression on those who rely on me. Besides, it's convenient for me because I understand that's the way this job is. And I'm very flexible, being open-minded in order not to miss the things, a lot of them unexpected, that come up when you're filming", he says.

Mortensen won't be in the cast of Teresa, the film that will be directed by his good friend Ray Loriga, whom he worked with in My Brother's Gun. "I didn't have time. I will be quite a lot of months promoting A History of Violence. Right now I don't have anything on the table, but everyone knows that the best offers come when you decide to stop for some time. I'd like to work in Spain again, well, in Spanish, and also to do some films in Denmark, my father's country, but I don't know where the next project will come from", he says.

The actor keeps a friendly relationship with Cronenberg and with Díaz Yanes also, who gave him the role of the veteran of the Tercios of Flanders who ekes out a living as a mercenary swordman in the Madrid of the XVII century. "Alatriste is a lot more than an adventure film. In many countries it will be sold as one because there aren't many films like this in Spain, with so many battle scenes, but it's a character in which the psychology is the most important thing, and it has allowed me to know about the Golden Century, or how the soldiers lived", he adds.
Top of this page
Last edited: 25 October 2005 13:36:39
© Canarias 7.