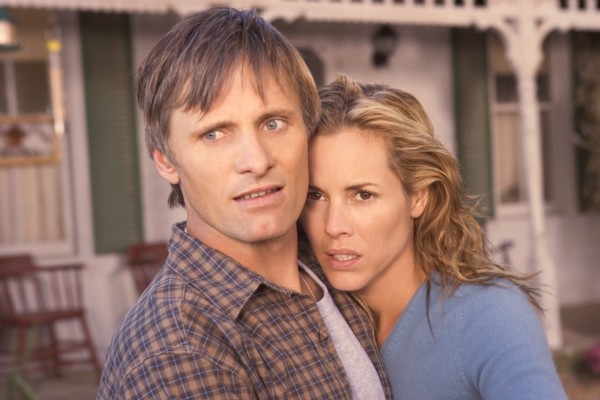 Viggo Mortensen's temporary headquarters during the Toronto Film Festival were bare except for one corner, where there was a sculpture assembled from a plastic grocery-store bag draped over a tripod.

Although Mortensen is best known as the heroic hottie in the Lord of the Rings films, the sculpture seemed to make sense. The actor is a Renaissance man who has published several books of poetry, had his paintings featured in A Perfect Murder and is earning acclaim for his latest role in A History of Violence, which opens Friday.

While Mortensen used the restroom, I tried to decide if the bag-on-tripod sculpture was a comment on our throwaway culture or a meditation on the relationship between art and reality. Turns out it was his luggage.

"Want to see my luggage?" Mortensen asked, emerging from his hand-washing and following my gaze to the "sculpture." "Let's see what's in here," he added, removing underwear, several T-shirts - one with fishing records on it, another emblazoned with "Bring Our Troops Home" - and a United Nations flag from the bag. "I travel light."

After spending the better part of three years toiling on Lord of the Rings, the biggest epic in movie history, A History of Violence - with its small cast and life-sized dilemmas - must have also seemed like traveling light. The film, directed by David Cronenberg, features Mortensen as Tom Stall, a family guy whose bucolic existence is blown wide open when gangsters stop at his diner and allege he has a secret past.

Cronenberg's movies suggest he may be something of a freak - 1996's Crash was about folks who get sexual gratification from being in auto accidents; Dead Ringers featured homicidal, identical-twin gynecologists; The Brood revolved around homicidal dwarves who emerge from cysts on a woman's body - but Mortensen says that couldn't be farther from the truth.

"His movies are very controlled, so that may be where he gets that reputation," says Mortensen. "But he's a true gentleman, and he has a wry sense of humor, which you can tell from the movie. It has this unusual humor even while it's talking about how deranged and perverse we all are underneath what we present to the world."

Mortensen says that humor bubbled up at weird times. "We'd shoot a disturbing sequence where people are shooting at each other, and you'd look over at him and he'd be rewinding the scene on the monitor and giggling," says Mortensen. "I know people think he's aloof, but he showed up every day, eager to make this movie."

Because A History of Violence is set in America and because it premiered at this year's Cannes Film Festival, where a number of films were interpreted as anti-American, History has developed a reputation as the aren't-Americans-stupid-about-guns? movie. Mortensen says that's nuts.

"It's not even about the United States. That's too simplistic," he says. "This story could happen anywhere. I mean, the idea that we keep secrets from each other and that those secrets can have enormous consequences - that is universal."

That secrets-are-dangerous theme emerges in Mortensen's career-changing performance, which includes an astonishing scene in which Tom seems to transform, without the aid of special effects, in front of our eyes. It's during a moment of crisis, when violence threatens Tom's family.

"I love that sequence, and what I love about it is that there are seven characters in it, and David shoots it almost like a play, so we see how all seven people are viewing what's going on," says Mortensen. "To me, that scene is why this is an anti-violence movie, because it shows that, at every moment, you have the opportunity to reject the use of violence. I also think it shows how violence is a part of all of our lives, even in something like the subtle violence of not listening to someone who is talking to you."

By that standard, Mortensen and Cronenberg had a completely nonviolent working relationship. "David was a partner, an insightful and helpful boss, not one of those people who only pretends to be interested in what you have to say," says Mortensen. "It's so logical for a director to be a good listener, but you'd be amazed at how rare it is."