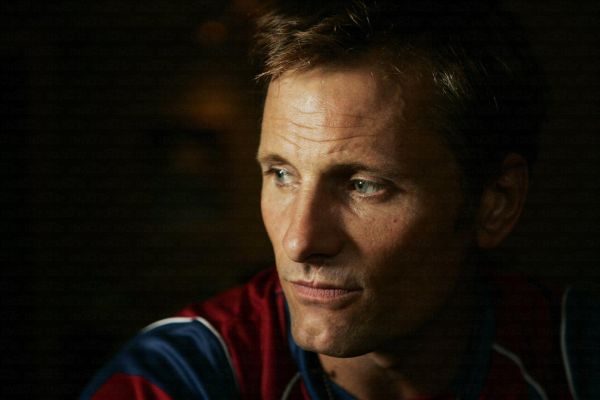 Midway through David Cronenberg's A History of Violence, Viggo Mortensen, who plays a decent Indiana family man named Tom Stall, has to toggle between two worlds in the bat of an eye.

After committing an act of heroism that has unexpected aftereffects, Tom must deny that he has a sinister past. But then reminders of it appear on his lawn, and something clicks: His voice drops an octave, his blood runs colder.

Tom has become who some say he is. And the calm, white picket-fence existence that revolves around his loving wife (Maria Bello), teenage son and young daughter seems to be layered atop another life that is more mysterious, yet just as real - and just as American. But which life is the shadow one? Tom seems as unsure of that as everyone else.

"This is about the chaos underneath everything, underneath all of us," says 46-year-old Mortensen (who played a more clear-cut hero, Aragorn, in the Lord of the Rings trilogy). "People are complicated, even when they seem not to be; we all have secrets. If you feel something, this film seems to say, then it's easy to act on it, whether it be something good, bad or in between. People, you know, are kind of weird."

Weird people have been Cronenberg's stock in trade since he emerged in the late 1970s as a director of films that revel in physical queasiness. They have matured from artful shockers (The Brood, Scanners) and complex horror movies and thrillers (Videodrome, The Dead Zone, The Fly) to brilliant psychosexual dramas (Dead Ringers, Naked Lunch, Crash). With 2002's Spider and now A History of Violence, he examines the terror that a torn mind can wreak on itself.

But Violence is something more. Unlike Oliver Stone's Natural Born Killers or the movies of Quentin Tarantino, there is no juvenile rush from the bloodshed. The film - based on a graphic novel, but far more effective than similar adaptations like Road to Perdition or Sin City - chills partly because it captures what is commonly accepted as an ingrained American myth: The lone man who protects his family, and defines himself, by tapping into long-buried aggression.

"America has exported the mythology of its own violence all over the world, through movies and television," says Cronenberg, who's a 62-year-old Canadian. "It starts with the American Western, and this movie touches on that tone: a man standing with a gun, taking matters into his own hands. That's a very resonant image. A lot of it is fantasy, sure, but it has taken on some reality as the American style. It captures the imagination."

Mortensen likens Violence (which opens Friday) and the current cultural moment in which it's being released, to 1952's High Noon. That classical Western famously came with a hidden political message: the need for Americans to resist the McCarthy witch hunts.

"On the surface, it was a mainstream movie," the actor says, "but it was very layered, with a lot going on in it. America today seems to be sure of itself, with our leaders saying we are a certain way, but there are other things under the surface - not unlike how America was in the 1950s. It was a conservative time, but there were a lot of things buried which were worth looking at."

"Some movies can't really ignore being viewed in a cultural context," Cronenberg says. "This wasn't made to be like that, but certainly, when George Bush talks about capturing Osama Bin Laden 'dead or alive' - a reference from the Old West, and an old Western TV series - the mind jumps: Is the foreign policy of the current administration based on old Westerns? Because that idea of redemption through violence or vengeance at the point of a gun [ignores] some larger cultural issues."

Yet Mortensen's not so sure. "I don't think it's a specific comment on violence in America or our foreign policy or our forms of aggression," he says. "It happens to take place in America, but this movie could take place anywhere."