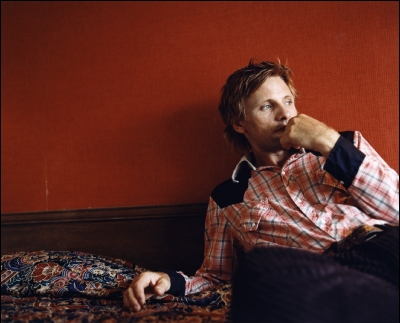 Viggo Mortensen never set out to be a Hollywood player, preferring the life of a bohemian jobbing actor to the A-list rollercoaster. But when his last-minute casting as Aragorn in The Lord of the Rings propelled him to superstardom, he found that fame can have its uses.

It's fair to assume that Viggo Mortensen wasn't looking for the kind of fame that he now enjoys or, more accurately, endures. It's the kind that leads to strangers interrupting his conversations, groups of teenagers laying siege to his hotel clutching glossy pictures of him in Aragorn kit, or, far worse, fans gawping at him like a prize exhibit and destroying the pleasure he finds in visiting an art gallery or a museum. The fact is that Mortensen's Orc-slaying antics in The Lord of the Rings trilogy have made him a pin-up - he visibly winces at the very phrase - and along with the huge amounts of money and the increased career choices come those fans, lots of them, wherever you are in the world, however private the moment.

Mortensen shrugs his rather slender shoulders and stares at me with the kind of intensity top directors pay handsomely for, as he explains his strategy for dealing with such intrusions. 'If I keep moving down the street, it's fine,' he says. 'But if I'm looking at paintings or I'm at a photography exhibition, somebody is going to tug my sleeve. Or if I'm having a conversation in a bar, then I am going to be interrupted several times. I know people mean well, but they don't realise how that can blow your train of thought. What I've learnt to do is to say, "Not now', and you feel guilty about it and they go "But I just want...' and you say "NOT NOW!''

He delivers these words with such an unexpectedly stern and loud voice that the publicist lurking a few yards away looks ready to haul me out of here for the grave offence of upsetting a superstar. But Mortensen is just warming to his theme. 'Sometimes I have to say it several times, but it's worthwhile to do that, because I don't want to be living in a bubble. I'm not 23 years old and I don't have plans to make another 20 big Hollywood movies or something.'

This last may come as a a shock to his agent, but Mortensen is a free spirit, an artistic soul, and now that his wings are so severely clipped, on occasions he feels caged. He has a reputation as a serious sort, a bit of a New Age peacenik, who put his name to anti-Iraq war ads in America. It's true, also, that he can be terribly earnest given half the chance, and that he comes across as rather studiously bohemian.

At the end of the last century, Mortensen, now 47, was moving through his career quite happily, making movies that interested him, and filling his time painting, taking photographs or writing poetry, when his life was hijacked. The director Peter Jackson called him out of the blue and asked him to jump on a plane to New Zealand because his original choice to play the character of Aragorn in The Lord of the Rings, Irish actor Stuart Townsend, had dropped out just as filming was about to begin. Mortensen didn't have the chance to muse on what the role might mean to him in the long term, although his first instinct was to turn it down because it would mean so much time away from his son, Henry, who was then 11.

'But I liked Peter and I liked the story. Tolkien borrowed the mythology from Norse and Celtic stories, and these were things that I grew up with. And my son loved the idea of me doing it.'

A year and a half later, with Jackson's box-office-busting trilogy safely in the can, Mortensen emerged a different man, even if he didn't quite realise it yet. The moment the first of the films, The Fellowship of the Ring, came out in December 2001, he was transformed into a star; a mean and moody action hero to small boys, and a stubble-chinned Nordic pin-up to women. Pretty soon his agent was on the phone telling him that the very best directors were offering him work and lots of it. His new film, A History of Violence, is directed by David Cronenberg, and as Mortensen points out, 'When somebody like David calls you, you call him back pretty quick.'

Today, some two years after the last of the trilogy, The Return of the King, was released, Mortensen is still living in an altered state because of it. 'Well, I certainly wouldn't be here and my face wouldn't be up there on a poster if it wasn't for the success of Lord of the Rings. It's just a fact: film-making, finance, life.' And he has been able to use this new-found status to good effect. He has his own publishing company, Perceval Press, which has recently released a collection of photographs called Miyelo, which Mortensen took during breaks working on the film Hidalgo in the American West. 'But I can also publish books by interesting painters and writers and I can afford to do so because my own books sell and there's a public that's interested in that. And the public have gone to see exhibitions I've had - more than they would have.'

He doesn't want to 'abuse' that celebrity power, he says, but even so he's not afraid to speak out on the Iraq war which, certainly at the height of the media frenzy building up to the invasion, wasn't exactly going to win him a popularity contest in the States. He even turned up on one primetime chat show wearing a 'No More Blood For Oil!' T-shirt. 'Sure, people get angry, but it puts the issue out there and it provokes a response. I know the most cynical say, "Well, he's just another asshole trying to get attention for himself.' Whatever. It's out there. So that's all right.'

Perhaps his bohemian outlook dates back to his childhood. His father, also Viggo, is Danish and his mother, Grace, American, and although he was born in New York, Mortensen spent much of his childhood in Argentina, with shorter spells in Venezuela, where the family lived on chicken farms and ranches run by Viggo Sr.

And then, after his parents divorced when he was 11, he moved back to the States with his mother and two younger brothers, Charles and Walter. Following university, he travelled to Copenhagen to discover his Danish roots, exploring, picking up work at the docks and in a flower market. 'It felt important that I should know about that part of me. I would love to do a film there.'

He returned to the US after falling in love with a girl who was going to work there. The relationship barely survived the trip, but Mortensen was back in New York, bar tending and wondering what to do with his life. 'I started thinking about acting. I liked movies and I started going to watch more and more. I remember seeing The Deer Hunter and thinking Meryl Streep was amazing. And about that time, I started to wonder how they did it. I mean, actually on a technical level.'

He continued to wait tables and took acting classes at night, and within three years had picked up his first screen role - as a young Amish in Peter Weir's Witness, a star vehicle for Harrison Ford.

Mortensen's talent to lose himself in a role has guaranteed him work on big movies ever since, even if he was rarely the lead. The high cheekbones and pale piercing eyes didn't do any harm, either. His taste has proved interesting, taking on period costume drama, as Nicole Kidman's suitor in Portrait of a Lady, alongside more contemporary roles such as that of a tough officer in Ridley Scott's army girls drama, GI Jane. In 28 Days, he was a baseball player in rehab, while in A Perfect Murder he was Gwyneth Paltrow's jealous lover, a temperamental artist. In that film, all of the artwork seen on screen was painted by Mortensen himself.

By the mid to late Nineties, Mortensen had been based in Los Angeles for some time. He'd married the actress and former singer Exene Cervenka shortly after they had met on the set of Salvation! in 1987. The marriage didn't survive, finally ending, after a long separation, in divorce in 1997, but the union did produce a much-adored son, Henry, now 16. 'Right now, my boy is with his mother because I've been working,' he says. 'But when I finish I'll go home to Los Angeles and he will be living with me again. He goes back and forth. Work means that I've been away sometimes, and the longest separation was during filming of The Lord of the Rings in New Zealand, but he came down to stay with me and watch the filming several times.'


Filming TLOTR was never dull. Peter Jackson's decision to make all three films back-to-back meant that his cast virtually had to move to New Zealand. It was always physically challenging and Mortensen threw himself into it with typical commitment. 'Most people got hurt at some point,' he recalls. 'I got a tooth knocked out, broken toes, lots of cuts and strains, knuckles torn out.' When the tooth came out, he stuck it back in with chewing gum, went to the dentist at lunchtime, and was back at work in the afternoon. It was worth it. All three films were rightly praised for the glorious cinematic spectacle they provided. Mortensen is understandably proud of them, even if he's a little reluctant to act in front of imaginary monsters again. 'Seeing who you are playing with is a relief. In The Lord of the Rings we did a lot of things when there was nothing there. In A History of Violence I get to work with some very good actors right there with me.'

In Cannes, where A History of Violence had its world premiere, the film won many admirers, and it's easy to see why. On one level, this is a taut, clever thriller about the owner of a small-town diner, Tom Stall - Mortensen - who becomes a hero when he stands up to two killers who have drifted into town. But as the film develops, the audience is drawn into an intriguing guessing game about exactly who this man really is.

With a superb supporting cast, including Maria Bello as Stall's wife and Ed Harris and William Hurt playing menacing villains, Cronenberg examines not only violence and how it is portrayed on screen, but identity and authority. And ultimately, how we all have things we keep hidden. 'We all have secrets,' says Mortensen. 'And that's interesting to explore. What I liked about the way David handled the violence was that it looked real; it was ugly and immediate, and it has long-lasting consequences, just like it does in real life.

'I think what the film says about violence is that it exists and it's inevitable. Human beings are capable of violence, it's just the way that we are. But it also says that we have a free will and that we can turn away from it. But what is more interesting is that it makes you think about identity and about authority. And that's the best thing of all - with a David Cronenberg film, he makes you do some thinking.' And Mortensen likes that. He's perfectly happy when he's alone and has plenty of time to think. 'I don't get enough of it,' he sighs. 'There are always so many people around...' Usually with a picture of the mean, moody and magnificent Aragorn in one hand and a pen in the other. But then, they have been warned.