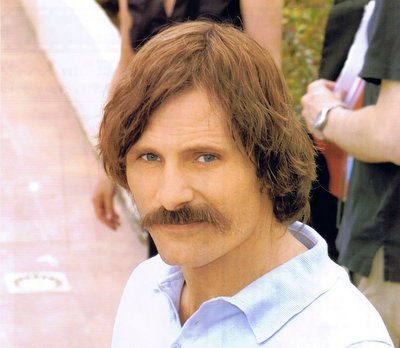 Viggo Mortensen swaps swords and Elves for sex and violence

Believe it or not, Viggo Mortensen is a peace-loving kind of guy. Yep, Lord Of The Rings' bold warrior Aragorn is a Hollywood hippie. Never mind that the first three letters of his first name means 'war' in Scandinavia. Scraps at school - be it in Argentina or New York, where he was raised - were few and far between.

"I was someone who kept to himself," he says. "I try to avoid trouble if possible." So it's all the more surprising that the 46-year-old half-Danish star turns in such a terrifying performance in David Cronenberg's A History Of Violence.

Supping a herbal remedy from a mysterious brass pot that looks like it was stolen from Middle-earthy, while sporting a bushy moustache liable to make Bill the Butcher green with envy (for his next role as a Spanish soldier in Alatriste), Mortensen exudes a Zen-like calm.

"I think anybody is capable of violence," he argues. "If the film says anything, it's not that violence is typical in America or anywhere else, but that it's a human thing. As long as there are humans, there will be violence - emotional or physical. We're animals too, y'know? Humans also have free will and can make a choice to not behave that way."

Full of praise for Cronenberg, who first met the actor during his marathon publicity crawl for Lord Of The Rings in Cannes, Mortensen says of the Canadian, "David lets you ask a lot of questions, but he doesn't give you the answers."

Either way, having appeared in two Hitchcock remakes, A Perfect Murder and Psycho, Mortensen makes for the ideal actor to play small-town vigilante Tom Stall, a character our Alfred would no doubt have recognised. But after becoming the swahbuckling heroes of Lord Of The Rings and the Arabia-set Hidalgo, Mortensen confesses his Cronenberg experience had one distinct plus point. "No wind machines, no trolls and no horses!"
Top of this page
Last edited: 23 November 2005 06:08:51