By María Casanova - translated by Paddy 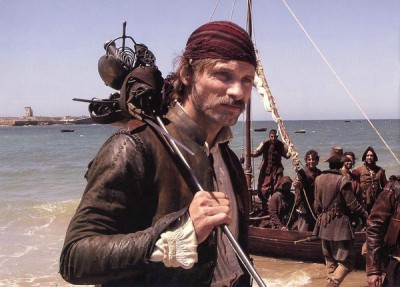 The most expensive production of the Spanish cinema, and filmed in this language is based on a successful literary character and set in the XVII Century. Agustín Díaz Yanes directs and Viggo Mortensen stars in it.

Arriving at the shooting of Alatriste is like visiting the Prado Museum. There is a Felipe IV who seems to have been taken out from a painting by Velázquez. He's amazing, truth be told, even though his name is Simon Cohen, he's an Englishman and lives in Chueca (tr. note: neighbourhood of Madrid). The environment and the weather are helpful because in a grey and unpleasant day as today is, the Monastery of El Escorial is a suggestive tunnel of time. Maybe that's why such a large crew as this film has (filmed with the highest budget in Spanish cinema, 24 million of Euros, and with a technical crew that in the days of a bigger display can be close to 400 people) is almost discreet.

The greatness of the monastery absorbs noises and comings and goings. The director, Agustín Díaz Yanes, shoots in courtyards, corridors, staircases and at the library in which, for the first time someone has obtained the permission from Artistic Heritage. Location shots with horses and carriages have been filmed at dawn. At 11 a.m. a very thin Viggo (Alatriste) Mortensen returns to Madrid in order to rehearse the last sword choreographies with the swordmaster, the mythical Bob Anderson (Star Wars, Lord of the Rings, Pirates of the Caribbean), and says goodbye to his director with a couple of kisses. The actor who he has fought the most (they say the edge of the swords is real, that's why they rehearse to the millimetre) is the Italian Enrico Lo Verso (Malatesta), who has already finished his work and gone back to Rome.

Eleven weeks of work have been left behind (there are almost four left) in Cádiz, Ãšbeda, Baeza, Sevilla, Talamanca del Jarama and interior shots in Madrid, designed by art director Benjamín Fernández (Gladiator, The Others, Carmen, The Sea Inside).There have taken place the adventures of Diego Alatriste, that taciturn, disillusioned soldier, loyal and generous to his friends and who, between wars, makes a living by hiring his sword.

The Spain of the XVII Century

The character and his environment, created by Arturo Pérez-Reverte and whose literary saga (there are five novels so far) is a selling phenomenon, is also an exhaustive revision of the ways and customs of the Spain of the XVII century. The script, written by the director, is based on them but with certain liberties. One example: Ariadna Gil's character, María de Castro, is a fusion between the character of that actress and the character of an innkeeper (Caridad La Lebrijana).

It is the turn of shooting in the courtyard with Javier Cámara (Count-Duke of Olivares) and Pilar Bardem (in a cameo as a nun). The actress and Díaz Yanes have already shared the success of Nobody Will Speak Of Us When We're Dead. The other actress of that time, Victoria Abril, isn't in this one because she's now shooting Tirant Lo Blanc, by Vicente Aranda. Inside, they are doing the official introduction to the king of the Prince of Wales (Javier Mejía) and the Marquis of Buckingham (Quim Vila) escorted by ladies and jesters. Felipe IV receives them accompanied by Olivares, The Count of Guadalmedina (Eduardo Noriega) and some noblemen. When the group of Englishmen emerges through the light put by Paco Femenía, another scene appears which, from this side of time, seems to be of a fierce realism.

Antonio Cardenal (Origen P.C.) the first producer who bet on the project (now with the participation of Telecinco and Universal Studios Network Spain) says he is relaxed: "This is a cinch. There was one year of preparation, that is, with people who had joined and were earning salaries, which is something unthinkable in an average Spanish production. Thus, when you start shooting, everything is as it has to be". This is not his first high bet: "Everything began with The Ninth Gate (another novel of Pérez-Reverte's). A film with these characteristics is easier than what people think it is. Well! If you have the money...But with Roman Polanski and Johnny Depp you can get it straight away. It's the same with Alatriste. This is the kind of film I like, then when it comes to the release, having spent six or seven years in the project is worth your while". He was touched by some spontaneous acts of support, like when the people of Baeza postponed the local festivities for one week because they were filming. "It was wonderful!", he recalls.

Alatriste is a net Spanish production, shot in Spanish, and with 20th Century Fox as distributor. But there will be alternatives with subtitles to the original version in Spanish for its showing in other countries. Álvaro Agustín, producer from Telecinco, says: " Cardenal has the full support of the channel because we are sure of being able to make a film in Spanish that can go all over the world without difficulties. And we agree with the author and the director that a story of the Golden Century doesn't make sense if it isn't in Spanish". And so, the rest of the cast is Spanish, where we can find Unax Ugalde, Juan Echanove, Elena Anaya, Eduard Fernández, Pilar López de Ayala, Francesc Garrido, Antonio Dechent or Blanca Portillo.

"He was not the most honest man or the most pious, but he was a brave man...", Pérez-Reverte defines Alatriste, as well as mentioning "his glaucous eyes" several times. Mortensen fits the age, the athletic build and the colour of the look. He fights the Argentinean accent of his perfect Spanish and he's preceded by his reputation for being an extremely focused actor, and according to José Luis Pérez, make-up assistant (they worked together in Lord of the Rings),"he is a complete perfectionist". Cardenal praises "his titanic effort to polish his Argentinean accent up". The journalist has been warned not to ask him anything at all, so as not to disturb him.

The fact is that the actor may be what they say he is, but he also seems to be a normal guy. Three flags are hanging from the table with the monitors before which Díaz Yanes is following the takes: one of San Lorenzo (Mortensen's beloved Argentinean team), another one of Real Madrid (ditto for Celia Abraira, video technician) and one of Atleti (Mr. Director's, who was "at loggerheads" (jokingly) with the Real Madrid supporter) (tr. note: there is a "bitter" rivalry between these two teams). Beside it, there's a small table prepared for Mortensen with a thermos flask for the maté, decorated with a sticker of the San Lorenzo in question. And at one of the outer walls of his caravan, another similar sticker but much bigger. Aside from such a liking, or whatever it is, the actor queued up, today at least, in order to help himself to the catering food, he shared the table with some acquaintances of his who had come to see him and, when he finished shooting and getting changed (since he put his shoes on while sitting on the steps of his caravan, the scene was public) a thunderous music could be heard from the inside: pure flamenco. Either there are different Mortensens or Pérez-Reverte, knowing about his dedication and his visits to the set even though he doesn't have to shoot, was wrong when he told Cardenal: "he has got into Alatriste and he is like Bela Lugosi, who used to sleep in a coffin convinced of being Dracula"

In Uclés (Cuenca) a battle is being filmed with an enormous display and five cameras. In addition to the customary military consultant there is a stuntman who instructs Mortensen, Ugalde and Fernández in the handling of the muskets. They have to shoot, prime the gunpowder, lean on the fork and shoot again, for the medium shots in which they're being filmed detect the slightest doubt. The shots (special effects by Reyes Abades) are as realistic as the transparent masks which the cameramen who are closer to the action must wear to protect their faces. Some irregular balls made of soft brown rubber, supposedly shot by the enemy cannons, hit the earth and stir it up. The soldiers surrounding the actors are stuntmen at the command of Jordi Casares (Indiana Jones and the Last Crusade, Troy), action coordinator and second unit director. At the battle, apart from the crew, there are 600 extras and 100 horses. And, at the less artistic side but almost occupying more space, the logistics: car park, personal caravans, medical care vehicles, wardrobe tents, make-up tents, catering... an organized and enormous display.
Top of this page
Last edited: 26 August 2006 09:41:56
© Estudios Picasso / Origen Producciones.