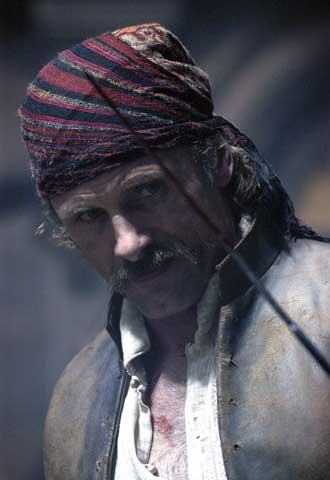 In the filming in Uclés (Cuenca) of the great battle of Rocroi that closes the film (filmed with five movie cameras) the attention of the more than 500 extras was at the same time exquisite and demanding. During breaks in filming, much water was distributed amongst them, under the high temperatures that they endured wearing heavy costumes, while at the same time their makeup was being retouched with blood or dust. "Don't bend your lances," Lázaro would shout, when the soldiers had to throw themselves to the ground with their weapons/lances in their hands. Even when going to eat in the large tents prepared in the fields they went in formation. Everything has been done on a grand scale in Alatriste. "We looked more like a circus caravan as opposed to the filming of a Spanish movie." That was the feeling the producer, Antonio Cardenal had upon seeing the long line of vehicles - a total of 135, between trailers, cars and buses - needed for daily transport to particular towns and cities (eleven distributed between Andalucía, Madrid and Castilla-La Mancha) close to 260 members of Alatriste's technical team, almost 20 actors, extras and all of the equipment that goes along with this.
Top of this page
Last edited: 7 August 2005 10:18:11
© El Pais.