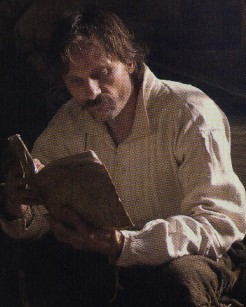 I met Viggo Mortensen in a restaurant in the Escorial. A slender and blond Dane, quiet with a timid air about him, who spoke excellent Spanish with an Argentine accent. He was going to play Captain Alatriste, but I knew little about him. I had seen him in some films and remembered most of all his fair eyes, his icy look while he tormented Demi Moore in G.I. Jane. I liked the slender and hard "mask", his talent as an actor, his interest in his character and in the project. During that meal, we spoke of photography and Spanish literature. Two days later he came to my house and while we drank coffee we surrounded ourselves with books related to the time period of the character, he gave me several things he had edited, among them a magnificent album of photographs he had taken of horses. In return, I gave him a treatise about horsemanship during the 17th Century.

We didn't see each other much during the intense preparation for the film and only on three occasions during the long months of filming. He called me once to talk about certain aspects of his character and his history, such as Alatriste's birthplace. I had never detailed it in any of the five novels published up until now, but Viggo was interested in the fact. "In Old Castile," I responded. "Could it be León?" he asked after thinking about it for a while. "It could," I responded. So then he went to León and walked about covering it inch by inch, remaining in each town, in every bar, talking with whoever happened to be in front of him. In effect, he finally concluded that Alatriste was Leónese. And he said it with such conviction that even I didn't question or argue the point. In that manner, traveling, reading, observing, Viggo filled himself with Spain; with our history, with the light and the shadow that made us who we are. And, in that way, in an astonishing process of assimilation, he finished transforming himself into a Spaniard, down to the bone. He studied everything, he worked until he lost his Argentine accent and he even frequented bullfights in order to learn certain mannerisms, a particular feeling of respect for one's enemy, a particular attitude of resigned stoicism towards life and death.

A couple of days ago I was on the plains of Uclés, cinematographically converted into the Rocroi battlefield. It was there, in 1643, where the dreaded Spanish regiment was destroyed by the French artillery and cavalry. The final sequence of the film was being shot, because it is in Rocroi that the final square made up of veterans from the Old Cartagena regiment makes a stand and the story of Captain Alatriste ends. I was behind the cameras, a privileged spectator watching hundreds of riders charge again and again against the loyal Spanish infantry and Viggo in the front line, his head uncovered and sword in hand, defending his life and that of his comrades. "He truly believes he is Diego Alatriste," Agustín Díaz Yanes (the director) told me between takes. "Actors are all a strange breed," he added, "but this one [Viggo] is a special case." I completely believe him. He has immersed himself so far inside the character that he seems more Spanish than anyone else. Just look at that desperation and that foul mood. Even on the days when he is not filming, he dresses [for the role] and stays away, with his sword in his hands, thinking. And that's how he is, the bastard. Immense.

Later, during a break in filming, I shake hands with Viggo, stained with special effects blood. We chatted for a while and then went to eat underneath the tent that protected us from the sun, while I observed his soldier's moustache, his scars, his doublet covered with dust and blood, his light and engrossing eyes that looked only like those of veterans, more beyond life and death. He wasn't an actor, I suddenly thought. He was the rigorous image of the tired hero. In him lived all of those arrogant men, brave, cruel, who survived by their swords and their blood in an agonizing empire and afterwards were forgotten by imbecilic kings and an ungrateful and miserly motherland, coming to their ends like dogs in the street, beggars, sick, mutilated, hung by justice or stabbed in battlefield. And there, sitting under the tent in front of my character, each of us with our gazpacho, haddock and mineral water from catering, I understood that I could never repay Viggo Mortensen the debt of gratitude that I felt towards him during this long and complex adventure of filming. To embody with absolute perfection what Sebastián Copons, loyal companion to Alatriste, says to the young Íñigo Balboa before the last charge against the enemies cavalry: "Si sales de ésta, cuenta lo que fuimos" (If you make it out of this, tell who we were.)
Top of this page
Last edited: 22 August 2005 03:26:32
© Diario de Leon.