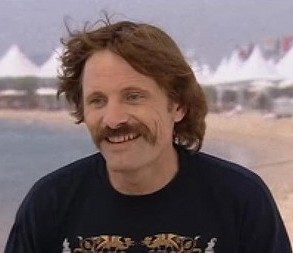 What was the immediate attraction when you read the script?

Well, dramatically I thought it was an interesting story immediately because...in the hands of the right director, you know, like this one. Another director would have made a very simple, you know, exploitation, violence movie. But I liked... dramatically the situation where circumstances out of your control force a person or several people in a story to be more honest about themselves and about the secrets they have than they usually would be. This is automatically an interesting dramatic situation so that's what interested me and still interests me...when I see the movie that's the best thing about it.

What is interesting to me about this movie, and what it is saying about all the violence, is that violence is everywhere.

In this process of rebirth in your character is this violence really necessary?

I think in the end the movie says, to me anyway, violence exists. It will always exist. But as a human being you have a choice to reject it, in the end you do have a choice, and that's what it's about.

I think this movie reminded me of a western.

This character wants to protect his family. How was it working with David Cronenberg? I read you brought a few things on to the set.

Yeah, well he's very...I mean, he encourages people to participate you know, like most good directors. I wish all directors were like him. Only very few that I have seen are secure as men or women as people. You know they are organised, they are prepared, professional but when you're shooting they are open so it invites you as a actor or, I suppose as a photographer or a cine-photographer, whatever, to contribute. You feel like it is a group effort. Of course in the end he's the author and he'll decide how everything works but you feel like you have time. It's relaxed, there's no shouting and...he has also...most people see his movies and think he's a very, you know, twisted person but really he has a great sense of humour. So even though emotionally there was a lot of difficult days on the set, you know, uncomfortable. There was always a lot of joking going on. It was a lot of fun making this movie. He has a very good sense of humour, maybe a very dark sense of humour, [laughs] but a good one.
Top of this page
Last edited: 21 May 2005 13:09:49
© ARTE.