TIFF 2020: Falling Review - Viggo Mortensen proves he has a place behind the camera 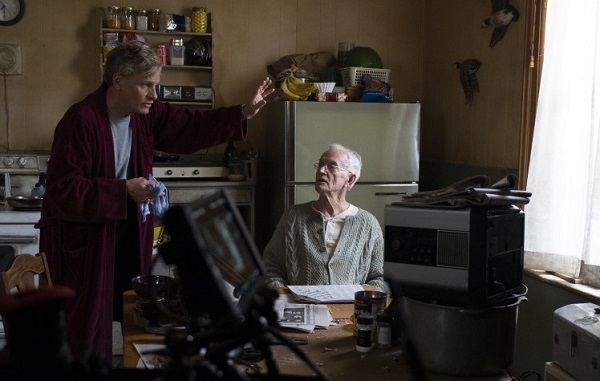 Image Brendan Adam Zwelling.
© HanWay Films/Perceval Pictures.
Viggo Mortensen mines his personal relationships with his family for his feature directorial debut Falling, which sees the Canadian-loving (and Canadiens-loving) actor train his lens on the dynamics between a man and his ageing, dementia-suffering father.

Mortensen stars as John, a gay man living in Los Angeles with both his husband and daughter. As his father Willis' (Lance Henriksen) health deteriorates, he reinserts himself into John's life — his homophobic and racist vitriol now more unfiltered than ever. But despite the crude and hurtful words Willis spews, John and his sister Sarah (Laura Linney) feel bound by familial duty to care for the man who hurts them the most.

It's a complex story rooted in Mortensen's own memories of his doting mother and difficult father — both of whom descended into dementia in their latter years. Here, Mortensen pens a screenplay that allows him the cathartic release of acting out some of his experiences and frustrations — circumstances that will feel all too familiar to anyone who has lived with declining loved ones. Despite his faults, Willis isn't a bad guy in John's eyes; he is simply Dad, as vicious and unbearable as he may be to the outside world.

As a director, Mortensen is more than competent. He expertly weaves between present day and flashbacks from both John and Willis' points of view. Some of the flashbacks are so elegantly and ambiguously placed in the story, we question exactly whose point of view we are seeing. Is it Willis' remembrance of his son, or a son's look back at his dad's "tough love"? In the rare moments when Falling doesn't quite work, the performances and Mortensen's skill as a director allow the story to continue to resonate, even when we're left to fill in some blanks.

At 80 years old, Henriksen is a formidable on-screen force opposite Mortensen. He's given a chance to flex his acting chops in a way he hasn't in years. Mortensen, too, is great, as you've come to expect from the three-time Oscar nominee, as is Linney who shows up here in a limited capacity. The Ozark star manages to work her magic in one of the film's most emotionally draining and heartbreaking scenes, expertly attempting to diffuse the sundowning of their patriarch.

Throughout the film, Mortensen's intention as a storyteller is quite clear. He has a strong vision and Falling is hopefully just the start of a robust career behind the camera.