By Carlos Boyero - translated by Ollie and Zoe 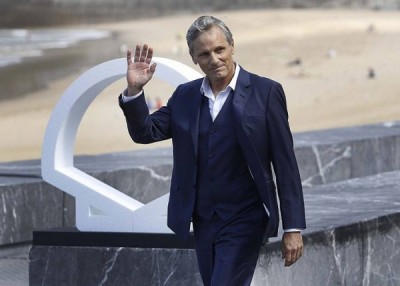 'Falling' photocall, San Sebastian International …
Image Javier Hernandez.
© El Pais.
I often watch the tense and romantic Witness, a film I adore and not only because of its beautiful and celebrated barn dance. It's the first time I noticed the face of a very young Viggo Mortensen on a screen. He had no lines, but he did have a good vibe, charm, presence. And just as I would pay money not to encounter certain actors and actresses specializing in tortuous psychologism in films - I don't dispute their talent, but they invariably get on my nerves - there are others who act like a magnet to my taste, who I believe, with whom I feel comfortable. Mortensen belongs to that group. There's something very clean, bright and attractive in him; he lends himself to the epic, although he can also be scary, violent to the point of being volcanic. You can check it in his excellent and disturbing performances in Eastern Promises and A History of Violence. Or with the brave, tough and battered Alatriste.

His well deserved stardom hasn't prevented this gentleman from acting in very small production projects in which he believed. Or putting himself behind the camera (and also in front in order to sell the film) in Falling, narrating a family story dominated by gloom, mixed feelings, the aggressive mental inferno caused by Alzheimer's - although before the sickness, this authoritarian, cruel and disdainful so-and-so must also have been a nasty piece of work - of a man for whom his long-suffering son, his boyfriend [sic: husband] and his daughter try in vain to offer a physical and emotional refuge. It's an intense film, well-told, thought out and deeply felt, that delves into painful feelings, the weight of memories, and the complexity of feelings. Mortensen's performance, as always, is believable. And the deranged and brutal old man played by Lance Henriksen generates fear and compassion. And it's always a pleasure to see that formidable actress, Laura Linney, even in a brief appearance.