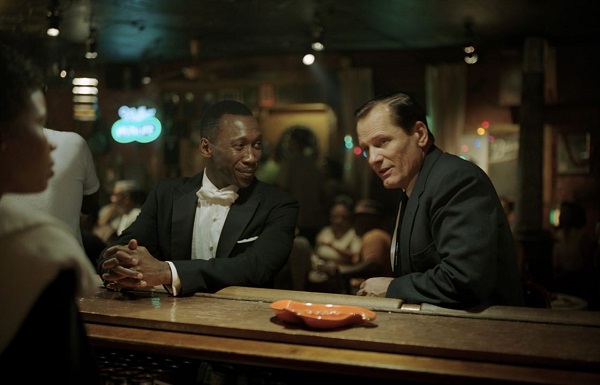 © Universal.
Green Book marks Viggo Mortensen's 50th silver screen credit to be released. The diligent actor is constantly looking for the unknown, that project that will challenge him, mentally and emotionally. Since retiring his crown as Aragorn in The Lord of the Rings trilogy, he's had a chance to do just that: branch out. Eastern Promises, The Road, A Dangerous Method, The Two Faces of January, and Captain Fantastic are all examples of diverse parts that showcase the actor's daring choices and range.

With Green Book, Mortensen's greatest fear was playing an Italian American. The Danish American thespian quickly overcame his hesitation when he read Nick Vallelonga, Brian Hayes Currie, and Peter Farrelly's script, and spent time with the Vallelonga family. Mortensen speaks with a thick accent throughout the film, and gained 45 pounds to play Tony "Lip" Vallelonga.

On the eve of the theatrical release for Green Book, I spoke with Mortensen on the Green Book red carpet about his preparation for the role of Tony Lip, working with Peter Farrelly in a dramatic capacity, all things Mahershala Ali, and some of his thoughts on The Lord Of The Rings Amazon series.

What were the most challenging parts of preparing for the character of Tony Lip in Green Book, accent, physicality, and all?

It all seemed terrifying at first, which is why I initially, respectfully, turned down the role. Pete Farrelly offered it to me, and I said, "This is an unbelievable script." It's one of the best I've read in a long time — the screenplay balances so many things. It's profound. It's funny. It's a history lesson, in some sense, a civics lesson, a cautionary tale. Then there's the subplot, the throughline of the letters. It's a love story. It's a story about coming to an understanding of compassion, about getting past your first impressions. There's just so much going on in that script.

But I'm not Italian American. So, I was like, "Eh. I think you should cast an Italian American, Pete." There's a lot of great actors who are Italian American. Great, memorable roles. But I got over that, fortunately, because I had a great experience. And, as I said, I was nervous about all of this. The way he talks, the way he moves is everything. But Nick Vallelonga started me on the right track. He said, "Well, why don't you meet some of my family?" And I went.

I ate with them. I spent a lot of time with them in New Jersey, in New York, on Long Island. And I gradually started to feel comfortable. Talking with [the family] and hearing recordings, seeing images of Tony Vallelonga, also seeing the few movies where he played small parts in, including the TV show The Sopranos — watching that, I was like, "Okay. It's just one step at a time, like any job." But this just felt like more of a stretch. I started putting the pieces together; it wasn't like I suddenly could say one word, or one gesture. It just started to happen before I realized it.

I was having a meal with Nick and his brother, Frank Vallelonga. And they were, "You got it. That was exactly like my dad." I go, "What? What'd I do?" And he goes, "Don't worry about it." You know what I mean? Their confidence in me permitted me to timidly begin to think, "Okay. Maybe I'll get there," because what I didn't want to do, and I'd never want to do, is do a caricature. I want to understand the character so that you can follow him. I don't want to judge him because I don't want you to judge him when you watch it.

Peter Farrelly is primarily known as a comedy director. He's tried to work with you before on projects, including on Dumb and Dumber To. What made you finally choose to work with him on this project?

It's a great story. I like the way he spoke about it. He's humble. And he'll go, "Eh, no. No. I just want to do a drama." He knew exactly what he was doing. He took a gamble not just on me, but half the family that I have in the story. They're not actors. There are several members of the Vallelonga family in there: my dad, my brother in the story, my uncle. They're not actors. And I was like, "Pete, man, you're biting off a lot," but he was more than capable. He knew how to steer this, how to shoot it, how to get the most out of us. It was great. I can't say enough about what he did. And I think that people, at least in the movie biz, are still kind of reeling. They go, "How the hell did Pete Farrelly pull this off?" "Who told him how to do this?" It's like, well, he's been making movies, very different films, but he's been making movies for 25, 30 years.

So, why shouldn't he be able to do this? If you saw the name Spielberg or Scorsese, or whatever, on the poster, you'd see the movie, and you go, "What a great change of pace. What a beautiful movie. And it's really funny. It's, like, so profound." You wouldn't even stop. You wouldn't hesitate to say, "This is a masterpiece. This is gonna be a classic movie that people will watch years from now and love just as much as now." But because it's Farrelly, they're going, "Did he really do that? Is it a fluke? What happened?"

People should give it up. He deserves all the credit in the world for the screenplay and his direction. It's a really well-put-together movie.

You and Mahershala Ali have fantastic chemistry throughout the film. Were you able to prepare together?

Well, fortunately, about nine, ten months before, the year that he won the Oscar, and I think lots of other prizes, for his work in Moonlight – awesome job, and a great movie – I was nominated for my work with Matt [Ross] on Captain Fantastic. And I dutifully attended all those events and applauded through them in my chair [laughter]. And we had a lot of fun. We didn't have the pressure of having to talk about anything. But I met Mahershala at one of the events that we were going to. It was a luncheon thing for, I think, the Independent Spirit Awards, where the nominees got to meet before the event. So, it was a nice, collegial thing. But when you stick that many agents and publicists and whatnot in a room, you're just having a 30-second conversation here and there. "How are you doing? What are you working on now?" And that's it.

At one point, I took my son with me as a sort of "bodyguard" [chuckles] as an excuse to make it fun so that he could see this crazy thing firsthand. And we found ourselves in a corner near the bathroom door, quickly. And so, I went through one edge of the crowd, and I was like, "Okay, we're gonna have to work our way out of here, eventually, and go find the car and get the hell out of here. But let's take a little break, here." And so, we were just talking about stuff and all of the sudden I see Mahershala. He's standing in front of me.

And I immediately just complimented him on his work on House of Cards and, of course, Moonlight and other stuff. And he said nice things about Captain Fantastic and other stuff that I've done. But then we quickly left that behind, and for the next half-hour, we talked about family, [my son] Henry [Mortensen], and then he was about to be the father of a baby, days from then. And he was most concerned with that — which I found healthy and positive — and not so much about these nominations that he was having, and these awards he was winning. And we talked about family and life and stuff for a good half-hour — an incredibly long conversation. You call that a week talking with someone in a place like that [laughter].

And so, that was it. I saw Mahershala win awards later; then I didn't talk to him again. And then when Pete Farrelly cast me, my first question was, "Well, who's playing Don Shirley?" Then, when I found out it was gonna be him, I was relieved. I said, "Pete, you're gonna be so happy you cast him." He's smart. He's a gentleman. And we know he's a great actor, so we're on our way now, for real. And then you'll see why.

Last question, what do you think about The Lord of the Rings Amazon series that was announced, and would you appear in it as Aragorn if you were offered a chance to reprise the role?

I don't think the producers would come to me. They'd probably need a younger person to play that part, but [laughter] I'm sure they'll do a good job. I hope they will. Otherwise, there's a lot of Tolkien fans out there, as I learned with making the trilogy. And if they're not happy, they'll let you know. So, good luck to them [the showrunners].