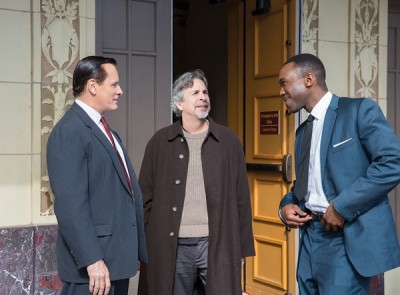 © Patti Perret/Universal.
Green Book had a hell of a night, last night at the Golden Globes. The film, which stars Viggo Mortensen and Mahershala Ali as a white, racist driver and a world-renowned Black musician who embark on a road trip through the Deep South in the '60s, ended up scoring three wins in the five categories it was nominated in, including Best Support Actor, Best Screenplay, and the coveted Best Picture (Comedy). But even with those new trophies, the film is the source of a ton of controversy and debate, which director Peter Farrelly attempts to clear up in a new interview.

Speaking to Vanity Fair, Farrelly details the struggle he's gone through as the co-writer and director on Green Book, as he deals with a constant barrage of reviews and articles calling his film problematic. This is, of course, compounded by the recent interview that was given by the Shirley Family that trashes the film, calling it a "symphony of lies."

"Normally, I don't read reviews," said Farrelly. "Because if I get 10 good reviews and one bad one, I remember the bad one and I don't remember the good ones. So I don't read any of them. To wake up every day and have stories [about Green Book] on the Internet about this, that, and the other, I don't read them, but other people do and they are saying, 'Oh shit, we have this article and they are saying this, or someone is accusing you of that.' It's disturbing, I don't like it. By the end of this thing, I'm afraid I'm going to have P.T.S.D."

One of the film's harshest criticisms comes from those who call the film a classic example of white-savior, due to the way Green Book seemingly shows how Dr. Don Shirley, a Black man, is helped discover his roots and identity with the help of the white Tony Lip. But according to the director, that's not true at all, for one simple reason – there are no saviors in the film.

"These guys help each other," he said. "Tony Lip gets Don Shirley out of some earthly problems, but Don Shirley saves Tony Lip's soul."

Farrelly says he has felt that he's been personally attacked since the release of the film, due to how people accuse him of trying to make money off the success and struggle of a Black man. However, he says that he didn't helm Green Book for money or accolades.

"The worst accusation I got was that I was a white guy taking advantage of a black man, and making money off of it," Farrelly said. "I didn't do this for money. I don't care if I make a dime… I'm doing it to make a difference. I believe in this movie. I think it can change people's hearts and minds, incrementally. I'm not saying it's going to change the world. But it can make a change in the right direction at a time when we need it. And that's the god's honest truth why I did it. That's why it pains me to get criticized."

And as for the fact that he and co-writer Nick Vallelonga (son of Tony Lip) never reached out to the Shirley Family over the course of the film's development or production, it's not an issue for Farrelly. As he explains, talking with the Shirley Family wouldn't have changed anything about the film.

"I wish I could have talked to the family earlier," said Farrelly. "But I don't think it would have changed the story, because we were talking about a two-month period [of Vallelonga and Shirley on the road together]. Those were the only people that were there… I would have just let [the family] know as a courtesy that we are making this movie."

Ultimately, Farrelly is just happy that, no matter what, people are talking about race thanks to Green Book. And yes, he thinks all this negative feedback, combined with the accolades, has led to more people talking about the issues, which the director feels is positive.

"I don't feel that people are coming down on me just because [I'm white]," he said. "Black people have been robbed of everything for centuries now, and I understand why they would want to tell their story from their point of view. I get that. I'm just happy that people are talking about race…This is a positive thing. I don't like when they come down on me, but I'm glad this thing is coming forward because that's what the story is about. It's good people are talking about it."

One thing is certain, people will probably debate the merits and faults of Green Book for weeks to come, as the Oscar season kicks into high gear and the film seems poised to score big.