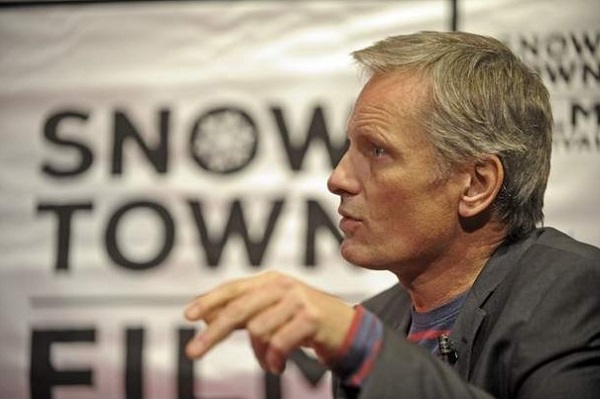 "Some snowflakes were flying tonight in honor of the Snowtown Film Festival," the twice Oscar-nominated actor told 800 moviegoers before the showing of his most recent film, Captain Fantastic, at the Dulles State Office Building.

Mr. Mortensen and his film opened this weekend's film festival that included a "Flannel Red Carpet" event and a more than an hourlong question-and-answer session with audience members getting to ask him about his inspiration of getting into the film industry, how he prepares for a role and what it takes to be a good director.

Mr. Mortensen, 1976 Watertown High School and 1980 St. Lawrence University graduate, has been nominated for an Academy Award for his role of a father who takes his family off the grid to live in the forests and mountains of Pacific Northwest.

He's devoted to raising his six kids with a rigorous physical and intellectual education but is forced to leave their paradise after the death of his wife.

Before the film's showing, he met with a small group of reporters to talk about the film. While he's "extremely proud" of what he called "a small movie," Mr. Mortensen expressed delight that local folks were getting a chance to see it in his hometown.

"It's really an honor to show it in Watertown," he told the crowd.

Since its release last winter at the Sundance Film Festival, Mr. Mortensen has done hundreds of similar events around the world to promote Captain Fantastic. The film didn't have the marketing budget that blockbuster movies get, so it relies on a word-of-mouth audience, he said.

That's why his Oscar nomination and a Screen Actors Guild nomination for ensemble cast are important, he said. The attention should boost DVD sales and rentals so more people get to see the movie, he added.

"I'm an extremely heavy favorite not to win," he joked with reporters.

It doesn't seem to matter. He'll be jumping on a Los Angeles-bound plane for a reunion on Sunday with the six young actors when they are up for the SAG award. Win or lose, the cast will have fun, he said.

"What's going to be great is that we'll have the most enthusiasm," he said. "We'll be the loudest."

During the preparation before filming began, he and the kids — whom he called "great actors" — became close. It helped bond them for some difficult and emotional scenes and the physicality they needed for their roles, he said. With the permission of her real father, the second youngest actor referred to Mr. Mortensen as her "summer dad" during the filming, he recalled.

Growing up in the north country helped shape how he approached his character. He learned to hunt and fish, plant a garden and hang out in the outdoors and on the water. All of that experience was beneficial for the scenes showing the family hunting for food in the forests of Washington State, he said.

To help him familiarize himself with the character, Mr. Mortensen brought with him books, pots and pans, a canoe and other belongings, some of which were originally from the north country, he said.

Mr. Mortensen credits his mother, Grace A. "Gay" Wright, for inspiring his interest as an actor. She told him stories and had a love for movies, he recalled. She passed away in her Watertown home in 2015 at the age of 86.

He still spends as much time as he can in Northern New York in what he calls "the triangle" of Clayton, Cape Vincent and Watertown, where family members live.

Last week, he was with his father, V. Peter Mortensen, in Cape Vincent on the morning when the Oscar nominations were announced.

He mentioned his fondness for the Watertown Wolves minor hockey team, saying that he drove up to Cornwall, Ontario, to see a game and was the only Wolves fan in attendance among obnoxious fans from the other team.

Watertown has "a better arena," he said.

After he's finished with promoting Captain Fantastic, he doesn't have another acting gig lined up. Instead, he has two scripts written and will continue to look for someone to help invest in another "small film about a family, but a different family," he said.

It almost got made last year. He was working on putting together a team, but the producer pulled out of the project. The actor would like to have a chance at directing it.

He's also penned another script, a larger more epic film. If things work out with the first one, maybe the other one will also get made, he said.