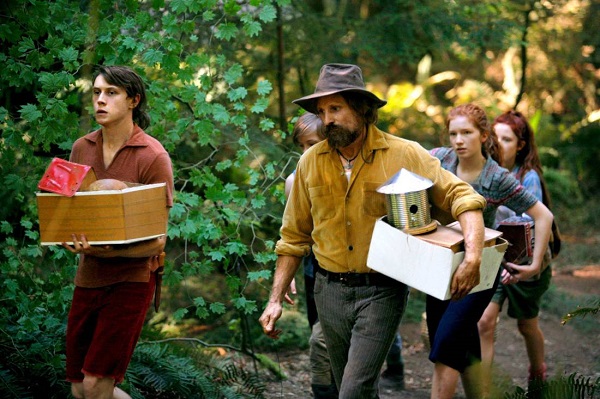 Image Erik Simkins.
© Bleecker Street.
Viggo Mortensen said he was drawn to his latest film, Captain Fantastic, because he saw it as a film that would make parents question their own parenting abilities.

"I think people frequently wonder, 'Gee, do I suck at being a parent? … Should have done more, experienced more?' You think you should have read more books, gone rock-climbing [a family bonding experience featured in the film], learned more about the world outside the United States, plus learned more about our own history in this country."

In the film, Mortensen plays Ben, a man who retreats to the backwoods of the Pacific Northwest, where he dedicates himself to turning his six children into truly extraordinary individuals. Along with rigorously home-schooling them, Ben engages his kids in daily physical activities that teach them total self-reliance, divorced from the approach most Americans take in raising their families in today's world.

After a personal tragedy occurs, Ben is forced to leave their remote home and re-enter a social order that questions his ability to properly raise his kids the way he prefers.

Mortensen thinks a lot of people will be able to relate to Ben, "because at one point he becomes deeply depressed, thinking, 'Man, I went too far. Everything I'm doing is wrong, and hence I'm going to throw it all away.' "

Since he plays the father to six children, ranging in ages from kindergarten years to upper teens, the actor admitted he wondered — before filming started — "how on earth they would find young actors who would be genius kids, athletic, passionate, and exuding confidence, but also be a little bit crazy — just like my Ben character. But fortunately we found them."

After shooting Captain Fantastic, Mortensen went back and thought a great deal about his own parents, and appreciated them even more than he had before.

Some parents try to be pals with their children, a technique Mortensen doesn't support. "There are those who let their kids just always be on their social media devices and gadgets — and kind of farm out their kids to that," he said. "If you take that approach, you're not going to take risks. You might be liked by your kids, because, in essence, you're letting them do whatever they want. But there's no involvement there. They're not going to remember you as really caring as much as you might have. "

Mortensen acknowledged that his Ben character in Captain Fantastic cared too much and that led him "to make a lot of mistakes."

Matt Ross, who wrote and directed Captain Fantastic, explained — while in Chicago recently — that the film was somewhat inspired by his own upbringing. He also admitted that the process of churning out the film's screenplay led him to question his own approach to parenting.

"That was the genesis of it," said the director, who also has been a successful actor, starring in such TV projects as Silicon Valley, Big Love and American Horror Story.

"I have two kids and I thought a lot about what kind of father, what kind of parent I want to be. If I'm really honest, I think a lot of it came out of fights and arguments I had with my wife about our own kids and out different parenting styles. What's interesting [is] if you make the conscious decision to have children, you don't really think, 'How is this going to work?' You don't turn to your partner and say, 'What do you think about this or that?' — until you have children and those issues arise. Then, suddenly, you can realize, 'Wow! We really disagree about these things!'

"So in the process of writing this screenplay, I thought a lot about my values, my wife's values, what I wanted to pass on to my kids, what she wanted to pass on to our kids, and I put all those issues into a form of a narrative that became the script for Captain Fantastic."