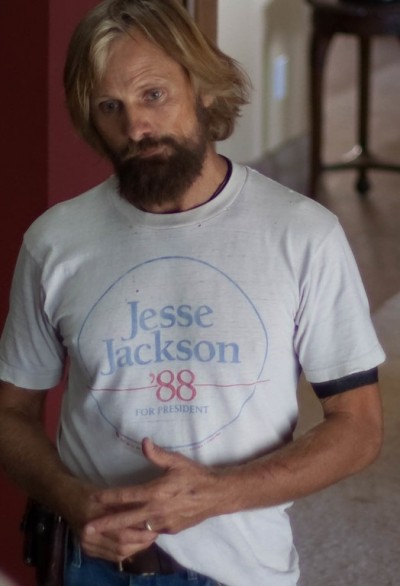 Image Cathy Kanavy.
© Bleecker Street.
Captain Fantastic may sound like a superhero or sci-fi movie, especially since it stars Viggo Mortensen, 57, best known as Aragorn in the Lord of the Rings trilogy. But the film, in theaters now, is the story of a father raising six extraordinary kids "off the grid" in the wilderness until tragedy strikes and they are forced to leave their self-made paradise.

What part of living off the grid would you enjoy?

I would miss certain things. It's not something I necessarily want to do full time, but there are periods where I've been out in the wilderness and I've enjoyed it.

What is your opinion of your character's child-rearing methods?

I think he's remarkable for the example he sets in terms of open communication, honesty and mutual respect. He encourages his kids to think for themselves and speak for themselves, and back up their opinions on things. But I sometimes found it scary, a little too intense and, physically, he put them at risk.

You did three big Lord of the Rings movies, but now you are doing more indie films. Any reason?

I'm just looking for good stories, and the ones I've happened to find and commit to have happened to be in other countries, or are independent films. I'm not trying to avoid any kind of budget or genre of movies; it's just the way it's worked out.

You have so many talents in addition to acting—painting, writing, photography, and you speak several languages.

I wouldn't be so arrogant as to say talents; I would just say interests. They're all in different branches of the same tree, which is recording, remembering and putting things into context, from your point of view, to other experiences you've had in life.

The scene in Captain Fantastic where you and the kids are climbing the sheer face of a cliff had to be scary.

That was the one day that I dreaded and was very happy it was done with because I'm not good with heights, usually—even though I find myself having to do things high up sometimes in movies. So that was tough and it was weird. I was up on this wall pretty high up and watching the kids jumping around like monkeys and not worrying about it at all. I'm like, "How can you guys do that? Be careful."

When they broke for lunch and everybody clambered down, I just stayed up there and they're like, "Viggo, aren't you coming down for lunch?" I go, "No, I'm fine here." I was just looking at the granite face and I didn't want to look down. "Should we send a sandwich up?" I said, "Sure, whatever!"

What did you think when you first read the script?

What I like about him is he's not a "no because I said so" dad. He's a "maybe not and here's why" dad. "Let me explain why." And I think that's all positive. But what I most like about the character and what the movie does is that it shows that nobody's perfect. At some point you're going to make a mistake. Then the question is, Can you show an awareness of that? Can you realize that and will you have the courage to admit it and then do something about it or try to make up for it? You see all of that happening in this story, and I like that. It's about finding a new balance, I suppose, which is a daily responsibility for a parent.

What are you most proud of?

I'm very proud of this movie. I think it's not only one of the best scripts, it has the most complex characters in terms of varied relationships with each other and the overall story. Very thought-provoking. When I read the script I was moved. I was laughing. I was really impressed by how well structured and how provocative it was, and the movie itself, I think, turned out really well. It's one of the movies I'm most proud of.