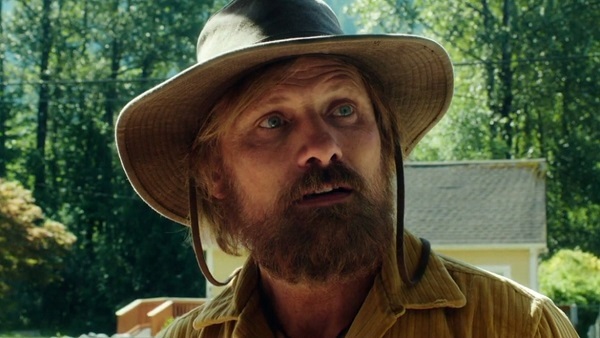 © Bleecker Street.
While reading the script for his new film, Captain Fantastic, Viggo Mortensen says he related to the main character but he points out, "It's a tongue-in-cheek title, obviously."

Mortensen plays Ben Cash, a former college professor who is raising his six children off the grid, survivalist style, in the remote Pacific Northwest. He's taught them to hunt, and the film opens with the eldest, Bodevan (23-year-old British actor George MacKay), taking down a deer using only a knife.

The kids also rock-climb, practice martial arts and follow a severe physical training regimen while maintaining an academic curriculum that would daunt a grad student, from political theory to quantum physics to classic literature.

As the real-life father of a 28-year-old son, Mortensen says that he was moved by the script by Matt Ross, who also directed the film, and started reflecting on his own parenting skills and wondering if he had done his best.

"You can have shifting opinions about that, because there is no such thing as a perfect parent," notes the 57-year-old actor. "But that doesn't mean you don't try. While you'll make mistakes along the way, it's in the trying that you do something good."

The thoughtful Mortensen has been known for taking on physically demanding roles in movies like The Road, Hidalgo, A History of Violence, Eastern Promises and even as Aragorn in The Lord of the Rings trilogy, where he lost a tooth in a fight scene. So he seemed a perfect fit for Ben, but he and Ross, who plays Gavin Belson on HBO's Silicon Valley, knew the casting of the children was crucial for the success of Captain Fantastic, which opens today.

"We had a great story, but we needed to find six kids that had the skills and intelligence and passion — and were really game to do some pretty out there stuff — to have a great movie," the actor says. "And Matt and Jeannie McCarthy, the casting director, found this amazing group of kids."

Before filming, Mortensen and the young actors got together in the woods to practice rock-climbing, martial arts and music, as the family sings and plays together.

"We got along really well, respecting each other's different personalities, and that comes through in the movie," he says.

Mortensen was taught to hunt and fish by his dad, and he has lived out in the middle of the woods — in a cabin, not a tepee as Ben's family does. So he brought his outdoor experience to the film.

"I just wanted to be as real as possible. It was important that you really believe that the family could be self-sustaining," says the actor. "I enjoy gardening. So I put in the vegetable garden for the movie."

Mortensen has always been something of a maverick by Hollywood standards as well as something of a renaissance man. He's also a poet, painter, writer and musician. While Lord of the Rings made him a star — he was urged to take the role by his son, who was a fan of the books — he has since been selective about the roles he has taken.

Before that, he appeared in more commercial films such as Crimson Tide and A Perfect Murder, in which he plays an artist. (His paintings are in the film.) With his Rings money he started Perceval Press, an independent publishing company (named for the Holy Grail knight) in 2002. It produces art books, poetry collections and albums. It has even dipped into producing films, including last year's Jauja, in which Mortensen stars as a 19th-century Danish soldier stationed in Patagonia when his teenage daughter goes missing.

Born in New York City to an American mother and a Danish father, his parents soon went to Argentina, where he lived until he was 11. When his parents divorced, he moved to upstate New York with his mother and siblings. Today, he is mostly based in Spain with girlfriend Ariadna Gil (Pan's Labyrinth), though he comes back to the States a lot to visit his family.

Because of all his travels, a laptop has become essential for Mortensen, who says he didn't know how to use one until he founded Perceval. Now he has one to edit books and work with images and text. "It's an incredible tool, because of what I can do. But like all of these things — like social media — if you don't control it, it will control you."

That sounds like something that might be found on the Perceval website (www.percevalpress.com), where Mortensen regularly posts news stories, quotes from poems and videos he finds interesting. "It's a fun exercise. It's like when you take photographs — so you remember the place," he explains. "By being mindful that I might want to recommend it, it helps me to be more aware of what I'm reading or watching."

Captain Fantastic starts off, as Mortensen describes it, as "some kind of liberal utopian fantasy," but it soon becomes something else when Ben finds out his wife, who has been away, has died.

After informing his children, the news sends the family on a road trip to New Mexico in an old hippie school bus. Along the way, Ben's parenting methods are tested as well as his attitude toward the world, which he has tried to shut out.

In one scene, Mortensen appears completely nude while at a public campground. It's part of a running joke involving youngest child Nai, who doesn't like to wear clothes.

"We felt it was very in keeping with their open philosophy," says the actor. "It's also humorous and underlines the contrast between them and the way other people do things."

While Ben has raised six kids to survive a cataclysm, they begin to see they are something of freaks in the outside world, celebrating Noam Chomsky's birthday like it's Christmas and parroting Ben's far-left mantra of "Stick it to the man."

Captain Fantastic isn't about one philosophy over another, though. It really questions what it means to be a parent and asks what values are important in a family.

"By being morally uncompromising, Ben compromises his morals in a way," observes Mortensen, "but he does realize that and makes adjustments at the end."

While Ben can be harsh, the actor believes in some of the same principles. "The foundation of the family unit is based on absolute honesty, curiosity, open discourse, mutual respect and communication."

But as a parent, Mortensen knows that things often go awry.

"A bad day or two as a parent and you can get depressed," he says. "Hopefully, you can find a new balance and find some compromises. That's true in any kind of relationship — whether one-on-one or in a community or in a marriage or a family.

"That's what it's about — finding a way to rebuild things. That's how democracy works — or doesn't work. It's a process, not a fixed thing."