Source: The Globe and Mail 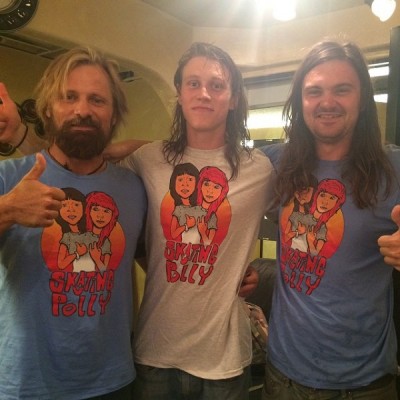 © Skating Polly.
The actor Viggo Mortensen doesn't live off the grid like Ben, his title character in the new drama Captain Fantastic. Instead, he's made a grid of his own, a concatenation of, among other things, David Cronenberg and Spanish-language films; painting, poetry and music; fatherhood (to Henry, now 28); and Argentine soccer fandom. He's the kind of guy who bought the two horses he rode during the three-film Lord of the Rings shoot (he played Aragorn, the one hunk to lead them all), and the kind of success to have a place to run them (he owns houses in Los Angeles [sic] and northern Idaho). He also invested a chunk of his LOTR dough in one of the more romantic follies of the 21st century: a boutique book publishing company, Perceval Press. Naturally, he prefers the more arcane spelling of the Round Table knight's name.

Mortensen, 57, is a soulful dude. I can hear it in his voice during our phone interview. You can see it in his abstract paintings, and in the lines around his blue eyes. You can read it in his poetry collections and photography books, which he publishes via PercevalPress.com. Thanks to his huge fan base, his titles go into multiple printings, and support the rest of his slate – all of which are a writer's or artist's dream, handsomely designed on expensive stock.

Perceval spent his youth in the forest, and sealed his fate by not asking the right question. Those things might have been running through Mortensen's brain when he signed on to Captain Fantastic. Written and directed by Matt Ross, and shot in western Washington, it opens with Ben and his six offspring, who range in age from 6 to 18, living in splendid isolation in the woods. The kids are miracles of parental attention: Not only do they shine in math, science and reading, they also possess every physical and survival skill. They eat healthily, debate passionately about Noam Chomsky and Howard Zinn, and don't seem to resent their somewhat megalomaniacal sire. Until, that is, they take a road trip. Cue the Ben-versus-America conflict – though it might not resolve the way you think.

Lucky for Ross, his leading man had already read Chomsky and Zinn (he even calls them "the most important sociopolitical thinkers of the last century"), and had spent a lot of time camping. "I know and enjoy those kinds of landscapes, those kinds of forests, trees and animals, that kind of weather, those kinds of rivers," Mortensen says, in a scratchy delivery that makes his answers sound like lines of poetry.

"I wasn't crazy about learning the rock climbing [for a scene], though, or doing it," he goes on. "I was glad when that was over with." I tell him he looks pretty comfortable tucked into a cliff-side crevasse, and he coughs a dry laugh and a single word, "Good."

Mortensen was born in New York to an American mother and Danish father, but his family soon relocated to Venezuela, then Denmark, then Argentina (where he went to primary school). "They were pretty conventional parents," he says. "My mom was there more; that was the role norm of that generation. I have good recollections of both of them. They weren't likely to talk about sex or death readily. Although I asked, certainly." He laughs. "I tried to get things out of them all the time."

When his parents divorced, Mortensen, then 11, moved back to New York with his mother. As a teenager, he had what he calls "the usual rebellion – not wanting to let them know what I was thinking about or doing. Learning to find my own way." After university, he kicked around England, Spain and Denmark. (He's fluent in Danish, French and Spanish, and many of his poems are written in the latter.)

He made his film debut as an Amish farmer in Witness, and there's a distinct break in his filmography that he's highly mindful of – before LOTR, when he played supporting roles; and after LOTR, when he landed leads, including The Road, A History of Violence, and A Dangerous Method. His naked sauna knife fight in Eastern Promises became an instant classic, and earned him a slew of award nods, including an Oscar nomination.

Captain Fantastic taps into a growing feeling of disillusionment with modern living, and Mortensen agrees with some (though certainly not all) of what Ben stands for. "I like open communication," he says. "I think it's healthy to speak naturally, even with young kids, about illness and death. To deal with the human body, in general, without stress. I think any family model that's based on complete honesty, constant curiosity, mutual respect, and open dialogue, is just common sense."

Mortensen didn't practice Ben's brand of 24/7 parenting with Henry (whose middle name is Blake, like the poet, and whose mother is Mortensen's ex-wife, the musician Exene Cervenka). But he agrees with its intent. "Finding the right measure as an individual and family requires conscious effort and mindfulness. Daily effort, really," he says. "It's easier to be a father who says, 'No, because I said so,' than it is to be a father who says, 'I don't think so, but let me explain why, and if you have a counterargument I'd love to hear it.' That second model takes a lot more time, energy and commitment. But it's valuable." Mortensen and his son "can – and do – speak about most things," he goes on. "Anything, really. I'm glad of that."

He's been known to check out of modern life for weeks at a time – "I go into the woods or the desert, or stay at home and be quiet," he says. But he also loves "walking the streets of big cities, going into museums, engaging in sports with crowds of people." He's not in the social swim of Los Angeles, "other than the extremely rare occasions where I've been nominated for awards, where I've shown up and sat there quietly while other people won them," he says. "I realize people are involved in the social aspect because they feel – and they may be right – that it helps advance their careers. Maybe I've missed opportunities by not doing that. But it's not something I regret. It wouldn't help me do a better job.