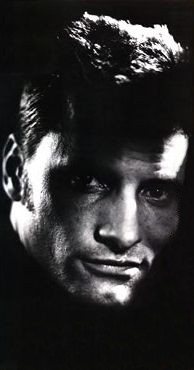 He got chinned by Demi Moore.

'I'm going to be remembered as the guy who got beat up by Demi Moore,' says Viggo Mortensen of his part in Ridley Scott's GI Jane. After recent brief appearances in Portrait of a Lady, Crimson Tide and Daylight, the role of Navy SEAL instructor Master Chief John Urgayle is the 38-year-old's highest profile role to date. It's a career trajectory he seems comfortable with. 'My first goal isn't to find a movie that will pay me "X' amount of money - unless of course I'm really broke.'

The film finds Mortensen trading blows with Moore both verbally and physically. 'She's a very strong woman, but not always accurate when she kicks,' he says with an agonised expression. Less painful and more intriguing was meeting the real SEAL instructors: 'They were wary about some actor coming in, but these were normal guys. They sat across from me, unblinkingly discussing whatever while I knew they'd killed with their bare hands.'

But Mortensen didn't want his character to be a full-on maniac. 'The easiest thing would have been to make him a woman-hater and a ball-busting head-stomper,' he affirms. Instead he suggested to Scott that 'poetry might be right for this guy.' Indeed, the concluding scene of the movie featured one of the dog-eared D H Lawrence books belonging to the actor himself.

Spending his formative years in South America, where his father was sent on business, Mortensen later lived in Denmark, speaks a number of languages fluently, and has just made a film entirely in Spanish. His ex-wife, Exene Cervenka, was a founding member of LA new-wave band X. Together they share custody of their nine-year-old compile son Henry.

'When I phoned him to see what he wanted to do today, he said, "I want to watch Cleopatra. It's got Elizabeth Taylor in it and I just want to watch it, OK? Do I have to explain?''