Viggo Mortensen: "Camus has the ability to plunge into the grey areas"

By José Manuel Cuéllar - translated by Ollie and Zoe

Source: ABC.es - Hoy Cinema
The actor, now based in Madrid, premiers Far from Men, a film based on a story by Albert Camus. 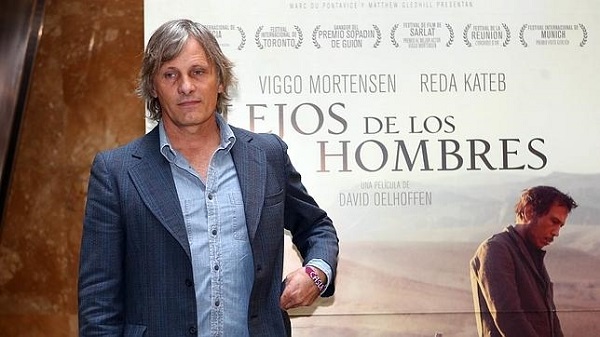 'Loin des Hommes' promotion, Madrid - 30 ….
© ABC.
Viggo Mortensen has fully placed himself in Albert Camus' shoes in this adaptation of his story, "The Guest," that the French director David Oelhoffen has titled Far from Men. Mortensen talks to us about the movie and his current life in Madrid, where he's been living for some time.

You are an admirer of Albert Camus, so we can assume that was crucial for you to get involved in the project.

Yes, I began reading him quite young and I've always admired him, not only as a writer but as a philosopher. He has a great ability to plunge into grey areas, seeking the truth in every situation, without ideological shadings, across borders, which is something that happens in this film.

A lot has been said about the photography in this film.

It's beautiful how David positions us on camera. Some enormous landscapes where we see ourselves as tiny things, like ants, in very hostile territory at times. Visually it gives you the message that we are equals, the tiniest little things of no consequence in the world. The two characters have nothing in common in religion, culture or origin, but with that visualization you realize that none of that matters.

Another message the film conveys is that it's difficult to be a good person in the middle of a war.

Very difficult. Camus talks about exactly that. There are no answers for everything but that doesn't mean it's not worth trying to find them. Both of them are making decisions at the same time that they are evolving. Here there's no good or bad, but rather grey areas. My character thinks that he knows the other and that no one can tell him who he is. And the other character thinks the same about him. In the end, they come to realize that there are nuances and that the prejudices we have always collapse when we listen to each other.

Your character is quite complex.

He's lived with the ugly side of people and has decided to distance himself from everything - violence, corruption, conflict, the evil side of things. He wants to do good, teaching Arab children to read. I understand that impulse, but no one can flee forever because life is finally going to seek us out.

There are horses in the film. Are you still buying the ones that are in your shoots?

Not anymore, although it's true that this shoot had some beautiful horses.

And what have you done with the others?

The first one, that I filmed with fifteen years ago now, got old and died. The other two I gave to some friends.

Are you adapting well to life in Madrid? It seems as though Barcelona fits you better.

I'm adapting well. What happens there is that being with all the tourism every day of the year, I don't know… I know that it's good for the city's economy but for me, it gets a little overwhelming. In Madrid, I can walk and be quieter. In Barcelona, it's different because they also know that I'm for Real Madrid... There's an issue there. (Smiles)

Are you continuing with poetry?

Yes, I write, but above all I publish books by photographers, poets, sociologists…

Are you still painting?

A little. I do drawings in notebooks that I sometimes reproduce in some book. Now I'm preparing a new book of photos.

And what about [Real] Madrid? In spite of the distance you were among the first to realize the Mourinho fiasco.

It was terrible to see how he destroyed the team and the club. The harm he caused dividing the fans still lives on. And the thing about Casillas has been tremendous. I still don't understand how he could survive the persecution he suffered. And the way he left the club, especially if we compare it with Xavi when he left Barça.

Tell me about that experience in León when you went to the villages in the mountains to perfect your Spanish for the filming of Alatriste.

That was interesting. We were taking a fencing class, and on the weekends, I would get away to the villages in the mountains of León, specifically to the Corueño valley. They are very private there and it suited me because I thought that Alatriste was like them. I went into a bar to eat cecina [tr. note: salted dry meat]. I asked for some tomatoes and they curtly told me, "It´s not the season." I sat down on a stool and nobody said a word to me. Stubborn people, I thought, but since I am too, I went back the next day and nothing, not a peep. They must have thought, there he is again that guiri [tr. note: a Spanish idiom for "tourist."]... I went back the third day and they told me to get close to the fireplace. It was so cold… In the end, they gave me two medals for parading León´s name around the world. They are great people. I learned a lot from that experience.

What projects do you have now?

I´m finishing editing some books and I've made a movie in the United States, the first one I've made there in several years. It's this kind of movie, independent cinema. It´s called Captain Fantastic, which I know sounds like Marvel but it has nothing to do with it. The title is ironic. It's about a father with six children, and they live isolated from the world in a forest without phones, without electricity, where the children learn a lot of languages, know how to hunt, how to farm, they read a lot, they know about everything, but what they don't know is how to behave with other people. The truth is that it's something that as a father I had not thought about it until now. It´s a very interesting movie.
Top of this page
Last edited: 3 December 2015 04:17:11
© Diario ABC, S.L..