Viggo Mortensen interview: "It's good to have your world turned upside down" 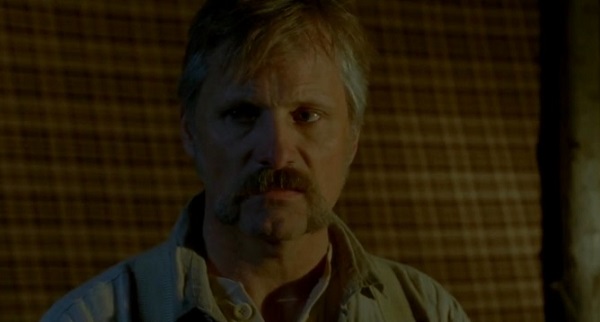 © 4L Productions.
Can I ask about the title of your new film Jauja – specifically, how do you pronounce it? It's like 'how', as in how are you doing? And 'ha' as in haha.

What does it mean? It was the name the Spanish gave to the capital of the South American part of their empire. The legend grew about the place back in Spain, basically that this was a land of milk and honey, an earthly paradise so perfect that you were punished for working and paid for taking naps, breakfast rolls grew on trees and the streets were lined with hams. Some people believed it and went.

What does that mean in relation to the film? A father loses his daughter and all of a sudden it becomes the most important thing in the world. This search to find or recover happiness is a process. It is never something that you arrive at, none of us do.

Are all of us reaching for something that will always remain out of reach? Yeah I think so. People do it with their gadgets. I mean computers, TV channels, the endless choice you have for distracting yourself and passing time between sleeps. You can easily get lost. You have to balance the quest for comfort and leisure with making the most of life while you're here, which isn't that long a time.

Cinema could be counted as a distraction. Perhaps there are two kinds, ones that make you forget about your own life and others where you gain something through watching.

Do you choose projects based on wanting to do one or the other? I hesitate always before saying yes. Each step is a choice. If I decide to go in one direction then I'm saying no to something else. I like to challenge myself. I think that being put into an uncomfortable position helps you learn. I like the idea of waking up in the middle of the night and suddenly feeling that everything I assumed about the way the world worked was completely wrong. As long as you don't allow it to cripple you mentally, it's good to have your world turned upside down.

How did Jauja change the way you look at the world? I was raised in Argentina. I had a certain memory of my father who was Danish. As kids my brothers and I thought his accent speaking Spanish was funny. I saw my father differently. It wasn't easy to be him with his northern European worldview to go down there.

Did you feel a connection to the Patagonia landscapes? Some of these areas I had been with my family on camping trips. It's changed a little bit, the roads are better, but the climate, the smells were very familiar. In between takes I was happy as can be, sitting on a horse in Patagonia.

Your love of football is something that has also stayed with you since your Argentinian upbringing. Do you follow any British sides? I like to watch Premier League football, Scottish football as well. A team I like – I've gone to see them play a couple of times and I like their stadium a lot – is Fulham.

What led you to Fulham? Someone invited me to go one time. I like their history. I follow their trajectory. But San Lorenzo is my team. I watch every San Lorenzo game without fail, no matter the time of day. It sometimes causes me trouble at work.