Good game last night for San Lorenzo, beating Caruso Lombardi's Arsenal 3-0. With the two first goals in the first quarter of an hour, the thing was quite well on track. Nice to see Cauteruccio scoring again. Even with the advantage on the scoreboard, I'd have liked CASLA to keep pressing from the top the entire second half, always attacking instead of leaving the ball and the midfield little by little to their rival. As I see it, it's there where Patón not only risks the other team shortening the distance with a goal, but it's also bad, I think, to get used to retreating. San Lorenzo played well and everything went great this time, but I prefer the offensive game without either speculation or mercy. But the first period was indeed nice. Villalba on the right was often unstoppable. Buffarini is the fastest Panzer alive. And Pipi Romagnoli also started very well on the attack, with nice passes, including the one he gave to Cauteruccio for his goal. Let's see if Tévez´s new Boca can keep up with us today. And beware of Belgrano; they also won yesterday and have shown themselves to be one of the most consistent teams in the tournament. 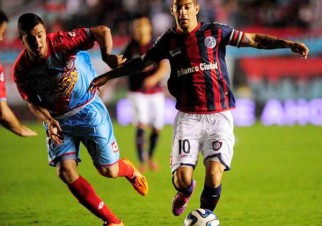 Pipi organising the game
One of the things we haven't talked about is the Women's World Cup Final in Vancouver. The US team thrashed the Japanese champions with a show of strength, agility and good aim. Carli Lloyd scored a hat-trick, and could have scored five all on her own. Seeing that the goalie Kaihori had gone forward too much, one of her goals was scored from the midfield of the pitch. The US showing was impressive, almost a scandal. 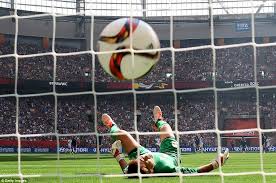 Dear Cuervo,
I'm alone here for a week with the kids because Guada went to Mexico to work in a clinic on a script that she wrote for a movie. When I took her to the airport, she said to me, "Enjoy this week alone with your children." I thought that she was kidding me. Later I remembered a documentary about the beatniks that I saw where they interviewed Allen Ginsberg a day before he kicked the bucket and he said, "I thought that I'd be desperate, but I'm euphoric." The same thing happened to me when I was finally alone with the kids. I was excited, got really into it and today I'm enjoying it in spite of the tiredness caused by all of these household things - bathing them, changing them, feeding them, getting them to sleep, playing with them - as well as going to teach my classes and do my things. I was very happy with the match CASLA played against Arsenal, which is always a team that poisons your afternoon. We won with stature and, contrary to what you say, it didn't seem to me that the team retreated; on the contrary, they continued attacking without stopping. Now, while I'm writing you, Anita comes to me and says, "Daddy, will you put this on for me?" and she gives me a doll and asks me to put on a piece of its clothing that absolutely won't fit. I tell her that I don't know how to put it on and she gets mad and leaves. I proceed. Now I hear that the baby who was sleeping in the stroller in our bedroom has woken up. I've prepared pear and polenta in the kitchen to give him. He eats a lot. Today I couldn't drink my whisky in the afternoon in front of the big picture window; watching the sun go down is something that fascinates me. That moment is solitary and in some way prepares me for the vicissitudes of the night - bathing the children, giving them some grub, getting them to sleep. James Ballard lost his wife on some vacation and was left with his three children, very little ones, in his care. He remembered that moment as a great tragedy, but later, when he got over it, he said the happiest years of his life were spent with his children, that his children educated him, they focused him. And between baths and plates of food and taking them back and forth to school, he wrote stories and novels. I like Ballard's work a lot, especially the stuff that's less science fiction, The Kindness of Women, Empire of the Sun, his final autobiography. I also like Crash. But I think that his magnum opus, undoubtedly, was raising his children. 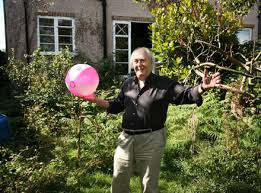 Very lovely what you say about Ballard and his family. I see that you increasingly like having two children, brother. That you are finding a way to incorporate everyday chores of caring for them into your creative thought. You are a good daddy and I'm sure very entertaining for them. Life is a heartbreak and a box of surprises at the same time and you always find a way to confront that contradiction in your work as a writer and in the way you communicate with your friends.

With respect to the CASLA match against Arsenal, when I referred to retreating and looking for the counterattack, I was talking about what the team did in the second half, when they already had enough security on the scoreboard - a quite normal and logical tactic in that situation. I only said that for me as a supporter, I never like that logic because I always believe in the total attack, always taking risks. That's why I'm not a Head Coach, since I would surely lose many matches with this kind of approach, but I would lose playing very handsome soccer! You already know how I am on that subject. I'm thinking about the great historic San Lorenzo players and especially the teams of my childhood with Carasucias and Matadores. As an adult, I realized some time ago that San Lorenzo teams didn't always attack in the 60's and the beginning of the 70's, but I remember them that way. As Jacques Lacan said, "Truth has the structure of fiction," and my "truth" with respect to San Lorenzo classic soccer has the structure of a Kamikaze attack. 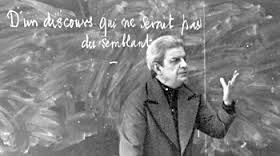 Jacques Lacan
The return of the Apache to Boca was, in soccer terms, undramatic. But the fact that this player, when he is at his peak in the Italian league, rising as a champion and the highest scorer of the last two years, would choose to return to play for his beloved team for a lesser salary and in a league obviously damaged by violence and institutional corruption, also has the structure of fiction. Many important players talk about returning from Europe to play with their original team in Argentina, but they never, or almost never, do it when they are at their best moment. They return injured and/or too old to be able to play at a high level. Tévez, as I see it, has done something very unexpected; he's made a choice of unusual moral purity. He wanted to return when he could bring something serious to Bosta, and he did it. Admirable.

He wanted to come back
There's a national teams tournament that's called the Copa de Oro [Gold Cup]. It's like the Copa América, but from CONCACAF, which includes the countries of North America, Central America and the Caribbean. The Mexican National Team almost always wins that cup and sometimes the USA. But this tournament is so important for Mexico that they sent a team packed with reserve players to the recent Copa America that was played in Chile. I know that tournaments of national teams don't matter much to you but I'm talking about this because yesterday I saw a shameless robbery and another match with the structure of fiction. Panama played courageously and much better than Mexico in one of the semi-finals, but the referee was seriously wrong to send off two of the Panamanians and call penalties against them. Despite the deadly clumsiness of the refereeing which so heavily favored a Tri [tr. note: Mexican team] without ideas, Panama was almost victorious. They never stopped attacking. The truth is that the Mexicans have come to the final with quite poor soccer and with more than one controversial match in terms of refereeing. The quarter-final between Costa Rica and Mexico was also very weird, with incredibly bad referee decisions in favor of the Aztec team [Mexico]. It smells a bit of FIFA-style corruption, but it could also be that the quality of the referees and judges is very low in the CONCACAF. What do I know. Anyway, even with what is supposed to be their best roster, Mexico is not showing much more than it showed in the Copa America. The other great favorite, Jürgen Klinsmann's Team USA, was surprisingly eliminated by Jamaica. I'd say it was an unusual result, although the Jamaicans have been playing very well lately. Unlike the Mexicans, they'd shown in Chile that they had an entertaining and aggressive soccer, with a good technical level. Those players do deserve to be in the final of the Copa de Oro. I hope that the match isn't sullied by another dubious refereeing performance.

Hopeful supporters and unhinged players
Speaking of fiction, I'm reading a book of poetry that Max Aub wrote in the Djelfa prison, Algeria in 1941-42 and later in other places. I'm sure you know Aub's work. It's been shown that he invented many things, that not all of the poems in this collection called Diario de Djelfa [Djelfa Diary] were written in that place at that time, although he did spend time there and in other prisons in France at the beginning of the Second World War. The basis of his real experiences resides in his poems, that are very good and very direct, but contain a lot of fiction as well. And it doesn't matter at all that it's like that, that this poet invented and reinvented a character for a brutal diary of survival. It's what we human beings do and perhaps all animals. We have memories that scare us or comfort us, and we tell ourselves thousands of stories during our lives to survive and feel that a logic exists, a narrative line with the capacity to explain and link our adventures and misadventures. Aub, a Jew born in France and raised from the age of eleven in Valencia (that's why he wrote in Spanish), suffered the absurd punishments of fascism and anti-semitism, but bore the memory of those torments with his poetic imagination. While he was in Djelfa, and later during his exile in Mexico, he transformed the deaths of his prison companions and the sorrows shared with them into wildflowers and persistent weeds. In Djelfa Diary, there's a poem that contains these lines that function as a kind of cradle song:

[Tr. note: Here are two translations of the lines from the poem. The first from Ollie, the second from Zoe.]

Ollie's translation:
"...Tomorrow is not future, it's right away;
tomorrow is almost now, and a now that´s gone
only a vain dream separates us,

which will be within reach tomorrow
Sleep, sleep, tomorrow will be everything,
that you are you and tomorrow is a nickname."

Zoe's translation:
"...Tomorrow is not the future, it's immediate;
tomorrow is almost now, and an hour ago;
only a futile dream separates us,

which tomorrow touches with its hand.
Sleep, sleep, tomorrow will be everything,
you are you and tomorrow is a nickname." 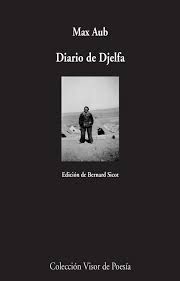