Source: Viggo-Works
Many of us have been wondering about the possibility of some new poetry coming from Viggo when he read a piece that was new to all of us during his appearance this past February at Teatre Romea in Barcelona. We should all be thanking our own Philipa who would not let this question die off, and indeed when we asked Viggo about it yesterday, we got this very insightful and quick response. 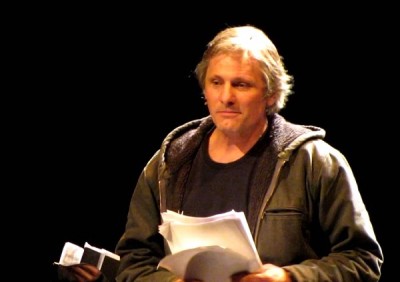 Solos at Teatre Romea, Barcelona - 23 February ….
© CoCo.
During your last reading event at the Teatre Romea with Rafel on February 23rd you read a poem entitled Esta Casa. For the fans of your poetry this was a new poem. Can we expect, this year, a book from Perceval Press of your own work?

Yes, it is a fairly new poem, from this past winter. I hope it will be included in a new book of poems this year. I know it has been a while since I have been able to produce a new book of my own. Only recently have I been able to complete half-finished poems and start writing new things, because the time - and energy-consuming demands of movie promotions have been fairly heavy and unrelenting for a year straight at this point. Added to that, I have been doing a lot of additional travel to spend time with family. By finding ways to say "No" when possible, sometimes even to attractive professional opportunities, I've slowly been able to carve out little pockets of time for private reflection. It takes a while for things to slow down sufficiently in order to let my imagination work unencumbered. Little by little I hope to get back to writing and making photos and drawings, as well as other creative pursuits I used to enjoy regularly. It has to start with doing nothing and not feeling I have to do anything, with believing time is not limited. Thanks for asking.