Source: Metro (U.S.)
The actor made an Argentine art film and has been pleased that a lot of people embraced it. 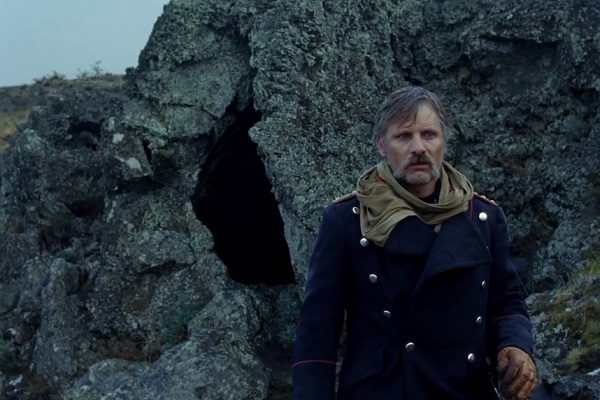 © 4L Productions.
With The Lord of the Rings a decade ago, Viggo Mortensen went from a perennial character actor to someone who could do whatever he wanted. And so he has. Since then he's been pickier about what films he does, sometimes only doing a film every few years, and not often in Hollywood. A part-time painter and photographer who also has over a dozen experimental albums, Mortensen's travels have now taken him to Jauja, a full-on art film from Argentine minimalist Lisandro Alonso (Los Muertos, Liverpool). The actor plays a Danish soldier in the 19th century who, while searching for his runaway daughter, winds up lost in an unforgiving and increasingly dreamy landscape. (He's of Danish descent and was raised in Argentina.) And Mortensen is surprised most mainstream viewers don't find it an impossible sit.

Alonso tends to work with non-actors. Did he change his approach up very much, could you tell, while working with you and other professional actors?

He realized right away that with me and the other actors that, if needed, he could get us to repeat things or understand things on a different level. In the past he would just put them in a situation where he would say, "Here's what you need to do," and that would be it. At first he was a little nervous, but he's got great instincts. At the same time he's an open book. Unlike a lot of directors, he's not insecure in the sense that he's more than willing to say, "I'm not sure what that's about" or "I'm not sure if that works or not." On the first day he said to me, "What do you say to them?" I said, "Who do you mean?" He said, "Actors." I said, "Well, I'm an actor." [Laughs] He asked if there was a certain thing he should say to the girl playing my daughter. Just the fact that he would ask that, it was endearing and great. I said, "I don't know, why don't you just do a take and if you like it, tell her you liked it." A lot of directors forget that's important. And he asked, "What if I don't like it?" I said, "Tell her you liked what she did and ask if she wants to do another take." [Laughs] And he quickly got the hang of it.

What about his previous films drew you to him?

They're all quite different. I like some more than others. But I generally like his sense of rhythm and time. It's not like other filmmakers. Some do remind me a bit of [Andrei] Tarkovsky's work or [Aleksandr] Sokurov's work. There's something about the treatment of landscape and time in his storytelling I find attractive. I realize it's not really commercial. But it's something I like to watch.

You seem to have become more free to do films that aren't very commercial after The Lord of the Rings.

I've always done that. I'm always looking for something that I wouldn't be embarrassed to see 10 or 20 years from now. There were certainly movies before Lord of the Rings I did because I needed to pay the rent or gain experience. But when I started getting more responsibilities after my roles became bigger, I started spending more time on preparation and the responsibilities on the shoot and, most importantly, the time and energy you put into promoting the movie, to help the movie be seen. Now I choose very carefully because it's a lot of time.

Did you get the sense that, unlike a lot of independent movies with name actors attached, it would have trouble getting funding without you?

Lisandro didn't need me to be in this movie to get it made. He was going to make this movie anyway. He makes his movies for nothing. What did help was an actor and a producer, there's now another layer, an extra dimension. He had been at Cannes before, but maybe now he had a little more attention, just because he's working with actors and with an actor who's relatively well-known. All those things help get it to the public or to the attention of critics, at least, where they'll at least look at it. But he was going to make the movie anyway, and he would have probably have made a really good movie with or without me.

There's a real sense in this film of someone being lost in and swallowed up by nature.

Your character still holds onto this dogged pursuit for his daughter, even though, as the film gets stranger, that becomes increasingly impossible.

It's interesting to play a character who's always looking for a logical explanation within linear time, no matter how weird things get. We debated for a while how we should handle the strange scene in the cave, how weird the atmosphere should be. I said that, whatever happens, my character needs to stick to trying to make sense of everything all the time, from his northern European western point of view — that there's got to be a rational explanation to these strange questions he's getting. He doesn't want to give in to the weirdness. The more he's looking for a rational explanation, the weirder it gets.

There's a temptation for some viewers to try to solve films like this, as though they were puzzles.

Which is what he's trying to do. In some sense he is the audience.

At the same time Alonso doesn't try to answer anything.

The thing I like about Lisandro is the same thing I like about someone like David Cronenberg, which is they tell a story that provokes a lot of questions, but they never make any effort to answer those questions in any direct way. That doesn't interest them. That's the kind of artist I like: someone who shows you something or tells you something but leaves it up to you to work it out.

I've found that certain Cronenberg films require multiple viewings to even get a true grasp on what he's doing with them.

That's the great thing about his movies, and it's the same with Jauja, which I've now seen many times, and each time I see it I see new layers, little details that add to the overall sensation. Even things from the very first scene, the words that are said there set up a lot of other aspects of the movie in a way. I've heard a couple people say it would have been perfect if it had ended [spoiler, but let's say a couple scenes earlier]. I don't know why that would have been perfect. First of all, I don't think anything's perfect. But for me [the ending] follows perfectly, and it's set up from the beginning. The way he makes these big jumps is elegant. One jump flows into another beautifully. That's really hard to do without being clumsy or looking like you're being pretentious.

Have you found that viewers are demanding cold, hard answers about the film's meaning when you've presented the film?

Some people find it really disturbing. Many Q&As we've done we've gotten tons of interesting questions. There's no movie that's ever going to be liked by everyone. But this movie has had overwhelmingly positive reactions and, interestingly, very different kinds of positive reactions, and very few bad ones. I thought there would be more. I thought there'd be more people saying, "What the hell is this? It makes no fucking sense." When it started to be seen, when it won the prize at Cannes, I knew a lot of, for lack of a better term, mainstream-type critics would see this movie, people who had probably never seen a Lisandro Alonso movie, and they would say, "This is bullshit, I don't know why these movies win prizes." And quite a few of those critics seemed to get something out of it.

It's almost like this could be a gateway for some into art cinema.

Who knows? Maybe now some of those people will go see other movies, or see more Tarkovsky movies, and maybe they'll look at all the movies they see in a different way. It's good to wake up in the middle of the night and think, "Maybe everything I've been thinking is not quite right." [Laughs] I think that's healthy.