Source: Le Soir (Belgium)
In his devastating 50s, with dumbfounding modesty and a sacred talent, Viggo Mortensen is irresistible. Especially when he films in French as in Far From Men, the film by David Oelhoffen, in theatres on February 4. 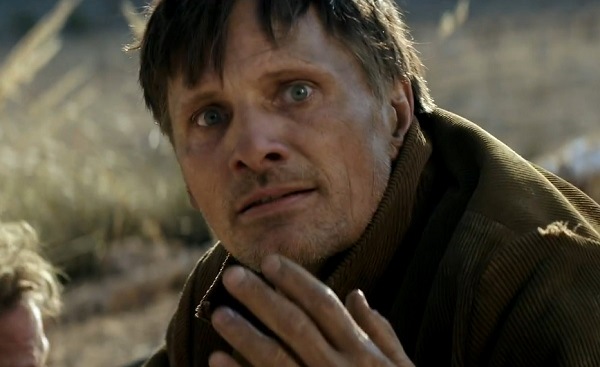 © One World Films.
A cup of mate in one hand, two magnetic blue eyes planted in yours, Viggo Mortensen responds slowly to questions, concentrated in the extreme. And at the outset, he's informal. For the promotion of this film, which he co-produced, the actor gave up the filming of the next Tarantino! That's Viggo. Professional to the ends of his nails. Cerebral, spiritual, sex symbol in spite of himself. Even if his manly and feline body inevitably recalls that steamy scene in Eastern Promises, where he fights in a sauna, naked under his tattoos. With a gentle voice, Viggo minimizes his charm. Polyglot, son of an American mother and Danish father, Viggo doesn't have roots anywhere. If he now lives in Spain, it is only out of love for the actress Ariadna Gil. For Far From Men, loosely based on the new Albert Camus story, 'The Host,' and shown in Brussels at the closing of Cinemed 2014, he learned Algerian Arabic for six months. If necessary, tomorrow, he would learn Chinese.

What feelings does Daru, the character you play in Far From Men, inspire in you?

Upon reading the script, I identified him with Albert Camus. Daru is a man who tries to be fair and who is asked to take Mohammed, a prisoner who killed his cousin, to the small town of Tinghit in order to be handed over to the police. This isn't his role: Daru is a teacher. He teaches French to Algerian children and wants nothing to do with the war that is rumbling in 1954. But the intrusion into the daily life of this peasant pursued by all forces him to take a position.

Daru becomes friends with Mohammed even though everything is against them. Have you ever faced such a situation in your life?

Yes. The process is never easy. On the other hand, it's incredibly generous. Because to accept the other, you must give him everything, pay attention to him, listen to him, and accept his point of view, which is necessarily different from yours. It is the attitude adopted, after quite a lot of reluctance, by the character of Daru, a humanist and courageous position very close to the spirit of Camus. Being fair can alter relationships you have with certain friends, sometimes even make enemies of them. The most important thing is to live with your contradictions, if you want to have peace in your soul...

Since when have you appreciated the work of this author?

I discovered Camus in college, in my late teens, while I was still living in the United States. I reread it at St. Lawrence University in the 1980s. And then, for the film, I dove back into him. I devoured the texts he'd written while he was a journalist before World War II, I read his Algerian chronicles and his correspondence with René Char. I appreciate the values he defends. If Camus had not become famous, if he hadn't gone to live in France in 1940, I believe he would have become a teacher, like Daru.

You have the reputation of investing enormously in your roles. Why?

I consider cinema as an open university. I learn from each of my roles, I learn from my mistakes, I like to get out of my comfort zone to plunge into the role. For Far From Men, there was a new language to learn and a country to explore, that I didn't know. I also did everything I could to get rid of my Canadian accent when I speak French. No-one asked me to. For Eastern Promises, I wandered Russia alone, for two weeks, despite the production's reluctance. This is my way of doing things: I need to believe in the roles I interpret, to understand what has happened from the character's birth to the first page of the script.

Do you take particular pleasure in interpreting the roles of sadists or murderers?

Alexandre Soljenitsyne used to say that the dividing line between good and evil runs through the heart of every man. For me, the work of the actor is to establish a meeting point between my view and that of the character. It's quite a pleasant challenge to take up, especially when the role plunges into the
depths of evil.

Why do you like giving your interviews in French?

Because the film is French and I speak French in it! I learned the language of Molière living in the United States, in northern New York State, not far from the Canadian border. I lived there from the age of 11 to 18, with my mother and my two brothers, after my parents' divorce. I listened to French language radio and television, then as a teenager, with friends, I made many trips to Quebec. Before this American period, I'd lived in Venezuela, Denmark and for a long time in Argentina where my father had found a job as a farmer. I grew up around horses, in the wilderness.

Where are your roots? What culture do you feel closest to?

I'm everywhere. Totally flexible. Inherently multicultural. And I love to move. In Denmark, I dine at 6 pm and I'm Danish. In Spain, where I live now, I dine at 10 pm and I'm Latin. In New Zealand, where I stayed a long time for the filming of the Lord of the Rings, I feel at home. I've never lived in Belgium, but I know they speak French with a delicious accent, a little bit like Quebec. Travel is the best anti-war weapon. I don't believe in caste, in races, in profiling one and the other on the basis of their nationality. It's a bad habit, always wanting to catalogue everything.

You have an incredible facility for languages…

Yes, but I have no merit. I was born in a multilingual environment, my mother spoke English, my father Danish, and I learned Spanish at school in Argentina. The other languages, French, Swedish, Norwegian, Italian... were easily added.

Viggo means 'Warrior' in Danish. Is this a trait of your character?

Viggo is an old name found in Norse sagas and Northern tales. This is a character who often embodies the values of loyalty, justice, family. In this sense, it corresponds to my temperament. Because I am also a fighter, and even stubborn!

What was your first job?

At the age of 11, with my bicycle, I would offer my services to American families to mow their lawn, remove weeds. As a young man, I was a truck driver in Denmark, dock worker on the docks in Copenhagen, bartender... I even worked in a metallurgy plant. I didn't imagine becoming an actor. I wrote poetry. And then I found a job in a cinema in the United States, I discovered Bresson, Bergman, Pasolini. I took drama classes at Warren Robertson's school, played a few parts in Tennessee Williams, Shakespeare, Ibsen, Chekhov and made a few films, including a Woody Allen... where I disappeared on the cutting room floor! It was really only in 1985 with Peter Weir's Witness that I truly started. I was 27 years old, I became an actor relatively late... It's strange, I've being going for almost thirty years now.

Was your first dream to become a writer?

Probably. I used to read a lot. A teacher gave me the taste for poetry. I like the discipline it imposes, I like the reign of precision and the perfect word. I find this poetry in cinema, where by the distillation of thoughts, of ideas, the way you tell a story with a certain economy, you touch on the same beauty. I make my living as an actor, but I make music, I paint and thirteen years ago I established a publishing company, Perceval Press, where I publish books or photos that I want to share.

What has changed between your beginnings in cinema and today?

I'm older! However, the more important the experience, the longer you spend on this earth, the more regrets you accumulate! But I'm still in the learning phase. I've known failure and the strain of not always doing what I wanted. But to advance in life, I've accepted my past and learned to live with my sorrows. As Camus used to say: it's easier to die with one's contradictions than to live them.

Are you a believer?

I don't like religions. I find them organized, institutional, ritualistic, and often dangerous. Even Buddhism doesn't inspire me. Despite the times we're going through, I only believe in man.

What are the human qualities that appeal to you?

In a man as in a woman, I look for the sense of listening, the ability to live in the present, to show interest for life. But I am a solitary soul, able to go several days without talking. After the shooting of a film and the promotion that follows, I need to get away. Far from the cities and roads. Not to meditate, but to find myself alone in nature, close to the trees, the sky and the water. I need to lose myself in wild places. And when I can't isolate myself, I find this peace by drawing or playing the piano.

If we were doing a review, what would be the most beautiful, the most important meeting of your life?

My mother, because she is the first and she allowed me to become the man I am. She taught me not to judge, to open myself to others and to love the cinema. She lives in the United States and when I'm not at her side, I know that my two brothers or some friends are. She's ill, she has difficulty speaking, but we understand each other very well by our eyes and our silence. Like the animals. I will always keep this image inside me: I was a little boy, we were in the car, and she was holding me in her arms. The sky was gray, the trees were racing by at full speed on the side of the road and I looked at her sweet face... She accompanied me to the Oscars, when I was nominated for Eastern Promises. She was staring at the older actors that I didn't know and reciting the most famous dialogues from their films. She was thrilled.