Viggo Mortensen: "You must live your contradictions" 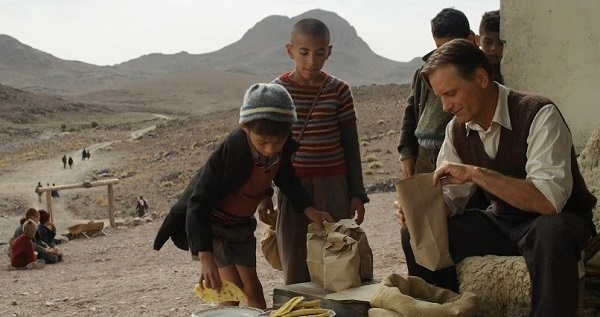 © One World Films.
The success of The Lord of the Rings helped the actor, poet in his spare time, to finance his own publishing house. He is currently playing in an adaptation of Camus.

Faithful reader of Albert Camus, actor Viggo Mortensen is playing in French director David Oelhoffen's second film, Far From Men, which his production company Perceval Pictures also co-produced. A film loosely based on 'The Host', an unknown new story from Camus, drawn from the collection The Exile and the Kingdom (1957), the last book published during his lifetime. In 1954, teacher Daru lives secluded in an Algerian Atlas school. With social unrest overtaking the countryside, he receives orders from the police to take a farmer to the city to be tried. The latter has killed his cousin with a sickle. Daru eventually agrees to take his prisoner, Mohamed (played by Reda Kateb). The two men, pursued by villagers claiming the law of blood, are inexorably linked one to the other. Daru knows that taking Mohamed to his trial condemns him to certain death. Does he have the right, the will? When he's not filming, Viggo Mortensen manages Perceval Press, an independent publishing house which he created.

You have portrayed in films many heroes of literary works. Among the best known, we can name Aragorn in Peter Jackson's The Lord of the Rings, or Old Bull Lee, William Burroughs' avatar in Walter Salles' On the Road. What is your relationship to Camus?

VIGGO MORTENSEN: I have admired for a long time the work of Camus, a free man who wasn't afraid to be wrong and to learn from another. I grew up in Argentina and I started reading the translations of The Stranger, of The Plague and Caligula. When I lived in northern New York State, near the Canadian border, I learned French, which allowed me to discover in the original text The Just, The Fall, The Exile and the Kingdom. David Oelhoffen has managed a very faithful adaptation to the philosophy of Camus, I was immediately seduced by his script.

The teacher Daru lives like a monk, a solitary lord. How did you prepare for this role?

A lord? Well, I don't know about that! But solitary, certainly. Hence the title chosen by David Oelhoffen. I love the solitude; I need it often. Silence and solitude are necessary for my work as an actor, editor and writer. I also believe that there are moments in life that require you to make choices. An excerpt from a poem attributed to Tahar Djaout (1) comes to me: "Silence is death / You talk, you die / You shut up, you die / So speak and die."

Sliding into Daru's skin was a challenge for me. In Algeria, I first learned Arabic. Camus' correspondence with Char, Nuptials, and the biographies also helped me understand the cultural universe of the film. When I was playing a henchman of the Russian mafia in London in David Cronenberg's Eastern Promises, I found inspiration in the books of Osip Mandelstam, of Anna Akhmatova, Marina Tsvetaeva.

Camus has been criticised for his moral position, for not choosing sides.

Camus replied: "My homeland, it's the French language", and not: "The homeland is France or Algeria." In The Fall, he had written: "It is easier to die of one's contradictions than to live them." This is the topic of Far From Men. If you want peace, freedom, justice, you must learn to live your contradictions. Daru is for me an incarnation of Camus. The figure of the teacher is very important for him. He dedicated his speech at the presentation of his Nobel, December 10, 1957, to his teacher, Louis Germain.

During the 1990s, I composed two collections of poems, which I then managed to publish, and a catalogue of my paintings and my photos exhibited at a gallery in Los Angeles. I told myself that one day, if I could, I would be a publisher to publish the books and authors that I like. The Lord of the Rings was my chance. The success of the trilogy has allowed me to work with other directors and to make some money, which I've invested in Perceval Press. In the beginning, about five or six books appeared each year, now on an average three, plus reprints. Since the beginning of this adventure, I've been living in Madrid. Surrounded by a graphic designer and a person in charge of sales, I supervise every stage of the editing process.

Why this name of Perceval?

An episode of the Arthurian legend stuck with me. When Perceval and his companions of the Round Table stop at the entrance to the forest, they decide that each will go to look for his own road. Symbolically, each person, each artist must be himself to find his way. This can be done at home, in a forest or in the desert of Far From Men...

To write a good poem requires discipline, discretion and precision. I often start with situations of everyday life. One day, in Tehran, I see a tourist bus parked in front of my hotel. The name written on the side of the bus, I forget you forever, intrigues me. Isn't that a strange name for a transport company? It became the title of one of my books of poems and travel photos... In late February, there will be a reading of my poems in Barcelona, and I'm about to release an anthology of new Argentine poetry.