"You must read Camus if you're plugged in" 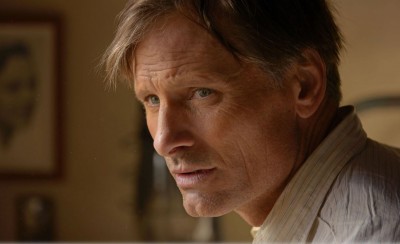 © One World Films..
Director Peter Jackson, who crowned him king in The Lord of the Rings, nicknamed him "no ego Viggo". His counterpart David Cronenberg is full of praise for his kindness, even if he has directed him as a brutal character in some films, like A History of Violence. Completing the enigma, Reda Kateb, his partner in Far From Men, tells of how at the canteen Viggo Mortensen will never fail to bring back his tray . . . and yours. This thoughtfulness materializes when the cosmopolitan actor offers to share his cup of maté, Argentine drink from his childhood, or a cigarette, trace of his New York addiction. Or hands you a collection of his photographs, a historical stroll in his secret garden.

At the age of 56, here he is speaking an impeccable French in the adaptation of The Host, the new story from Albert Camus. At a time electrified by racial intolerance, the author of The Stranger is suddenly, totally current. "You must read and re-read Camus, if you are plugged into our time. I devoured him in English in college, then in French in university. He has never left me", confides the actor from Far From Men. His bluish eyes shine: "and Gide, Rimbaud, Verlaine, Zola, then Proust, Balzac, Céline, Hugo. And Sartre, Simone de Beauvoir."

He grimaces at the memory of the pair of agitators from Saint-Germain-des-Prés: "These people, like the leftist elite of the post-war period, were dishonest with Camus, with a filthy injustice in their attempts to discredit and marginalize his thought." Always the righter of wrongs, Viggo Mortensen, just like the time of Aragorn against the Orcs. "In my opinion, their attacks on his private life, his work were rooted in a deep jealousy about his political and moral commitment. I hope that this film will reinforce the idea that Camus must be regarded as a decisive philosophical voice of the 20th century."

His French comes from time spent in Quebec and, more prosaically, his passion for the Montreal Canadiens ice hockey team. Keeping the essential here and there, Viggo Mortensen has been dragging his baggage from movie set to theatre stage for several decades. "Like the nomadic artists, my itinerant existence is explained without doubt by an insatiable curiosity for cultures and landscapes. It helps me to get into a role: I'm always anxious about understanding an era, a place. And too bad if I wander sometimes in obscure projects: I lose in money and notoriety what I win in originality."' He sighs, smiling at the memory of the American blockbusters "not even unworthy" that he has refused, F. F. Coppola and Ridley Scott: "I've missed some good chances to make myself rich. I don't regret it because, instead, I've been able to help with some provocative and original works."

Far From Men whispers its small universal music. "Before, I was an Algerian for the French," begins Viggo Mortensen. "Today, I am a Frenchman for the Algerians." This volatile position is not foreign to him. "In Argentina, I'm at home. As in Denmark or in New York. But I remain aware, having often experienced it, that nothing ever remains the same. Life, it's this game whose rules change at the same time as you participate. If you refuse to go forward, gradually, you will be excluded from the match".

He never ceases to learn. "My house is the Atlas mountains or the Iceland ice, the forest, the rivers or the sea, the stars, the setting sun. If I stop one day, I die. You must make the difference between loneliness and isolation: between the two, I see a road that can take me farther than I would dare imagine. And wherever this leads me, I still want to take it!" A look back, around the year 2000, when glory fell on his royal shoulders christened by J. R. R. Tolkien and the hobbits, brings him back to Earth. "This path, I see it as a challenge, with its joys, its failures, its surprises. Nothing has discouraged me altogether. Incidentally, I am still toying with the idea of making my own film. Because cinema is above all the geographical map of a daring journey, with its fundamental circus, its complete galaxies of artists... Wherever it is on this planet, I am willing." Have no fear.