Viggo Mortensen Seduces at the Romea

By Griselda Oliver - translated by Ollie 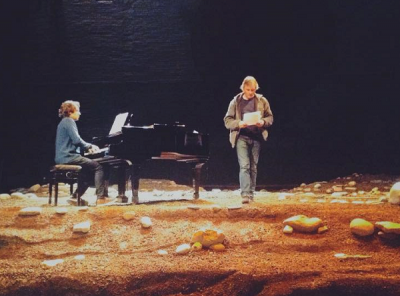 Solos at Teatre Romea, Barcelona - 23 February ….
© Teatre Romea.
Viggo Mortensen bares himself in front of the audience. "For me, music and poetry together mean something. When I feel something, I write. When I write, I think of a melody," he confesses at one point during the show. This is the essence of this Solos cycle programmed by the Romea Theatre, getting the protagonist of the event to face the audience. Viggo Mortensen, accompanied by pianist Rafel Plana, had to seduce a packed room that was impatiently waiting for him.

With a confident air, Viggo Mortensen moves freely around the stage. Like a bard who entertains his listeners, the actor begins to read in Spanish, English, and even in Catalan. Seated on a stone, he reads the first of his poems. It's about freedom. Another one about his childhood memories comes next. And others, about one's path in life, fate and time flying. He also reads one, written a long time ago, called "Matinee," that has to do with the acting profession. Meanwhile, Rafel Plana accompanies him with music. At Mortensen's request, he plays Aleksandr Scriabin´s Opus 6 for us. Being in Barcelona makes him think of his first time here; it was in 1995 for the shooting of Gimlet, directed by José Luís Acosta. It was then that he wrote a poem called "Otoño catalán."

During the evening, Viggo Mortensen takes the opportunity to remember some of his favourite poets. For example, he reads poems by Fabián Casas, like, for instance, "Sin llaves y a oscuras" [Without Keys and in the Dark], one by Bosnian poet Izet Sarajilic, or "Elogi de la discreció "[In Praise of Discretion], by Catalan poet Anna Rossell. With this last poem, the audience surrenders completely to the actor and applauds with great enthusiasm.

With this solo, the actor shows us that with a simple repertoire, a bold and self-assured air, he's able to captivate and entertain an audience enthusiastic at being able to see him perform live. Sic transit gloria mundi.

On leaving the performance, you could buy Viggo Mortensen's book Canciones de invierno as well as the CD, which can still be purchased at the Filmoteca's Bookshop. The money raised will go to help the Centre de Música i Escena per la Inclusió Social Xamfrâ [Music and Stage Centre for Social Inclusion], in the Raval neighbourhood.