Source: Viggo-Works
We had a chance to ask Viggo a couple of exclusive Viggo-Works questions recently and we hope you will find his answers interesting. 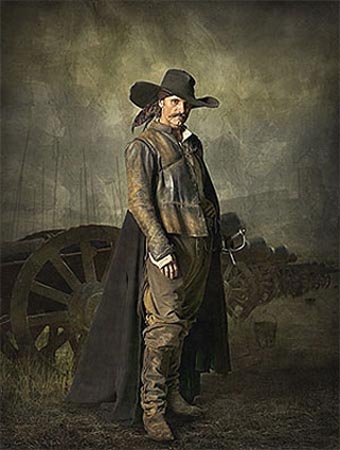 Image César Urrutia.
© 20th Century Fox/Estudios Picasso/Origen ….
The broadcasting of the TV series based on the Alatriste books has recently started. How do you feel about another actor embodying the role of Diego Alatriste?

I don't own that or any other role, so I do not have too many thoughts about another actor taking on 'Diego Alatriste'. Aitor Luna is a talented young actor, very capable of embodying the veteran soldier and sword-for-hire. I have not had a chance to see any of the series yet, as I have been travelling a lot since it premiered on TV in Spain. However, I have heard that Telecinco, the company that produced the movie version directed by Agustín Díaz Yanes and also has produced this new series, has not done an ideal initial job in terms of the locations they chose, the production design, the story lines, the sword-fighting, and the care taken with the 17th century language spoken. If this is true, it could be a case of trying to do something on the cheap, unfortunately, or of trying to make the show look and sound "modern" or "flashy" enough to appeal to a particular type of viewer without sufficient regard for the detailed period descriptions and dialogue found in the original source material. Maybe what I have heard is not true; in any case I'll wait until I see it and make up my own mind. I do hope they succeed in winning a loyal audience for the TV show. If the ratings are good, then maybe the producers can invest some more money and craftsmanship in the potentially rich story lines they have in their hands. Arturo Pérez-Reverte's Alatriste novels are complex dramas that showcase a unique period in Spanish and European history. I hope this new series ends up being a successful venture, financially as well as creatively.

You said that you would be attending the last of "The Hobbit" movies, accompanied by children, on the day that it opened as you have with the previous two movies. What were your favourite scenes in the final part of this trilogy?

It is difficult to single scenes out; the adaptation is too much of a piece, very much its own complex, ambitious story. Anyone can see that many of the special-effects set-pieces in this last instalment of "The Hobbit" trilogy are ground-breaking and impressive. It is a unique accomplishment to have adapted both The Lord of the Rings and The Hobbit for the screen on such an ambitious scale, and I congratulate Peter Jackson and his team for having successfully completed this immense task with such unprecedented craftsmanship. After many years of hard work, it must have been bittersweet for Peter and his team to have reached the end of this Tolkienian odyssey. As Thorin said, "There is nothing like looking, if you want to find something. You certainly usually find something, if you look, but it is not always quite the something you were after." The main thing is to go looking, to make the journey. Every time you read Tolkien's work or watch Peter Jackson's adaptations of it, the experience will be different, singularly yours on each new occasion because "...there's no knowing where you might be swept off to", as Bilbo said. Peter and his team made it there and back again, and my hat's off to them all.

You remarked in a recent interview that you might take a break from acting in 2015 in order to concentrate on making your own movie (we presume you were referring to "The Horsecatcher"). Has working on "Jauja" and "Loin des Hommes" been valuable in showing you how this could be achieved?

Every filming experience shows you how to make a movie and, at times, how not to make a movie. Every movie story-telling effort can teach you things if you pay attention. Those two movies were especially challenging to make because of their remote locations and limited budgets. Both David Oelhoffen and Lisandro Alonso are meticulous and resourceful artists. It was a pleasure and an education to work for them, and I found both stories to be admirably original. If I ever do direct a movie, I hope I'll be able to do it as well as David and Lisandro have.