By Horacio Bilbao - translated by Ollie and Zoe 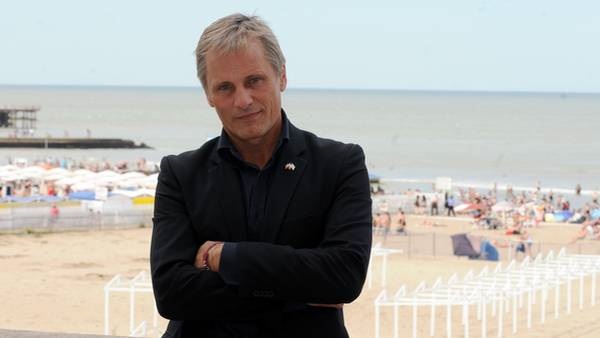 Presentation of 'Jauja' at the Mar del Plata Film ….
© Fabian Gastiarena.
Here in Mar del Plata, Viggo Mortensen is on a campaign. Devoted to his films and the dissemination of Jauja, true, but especially dedicated to San Lorenzo, in sync with Fabián Casas, another Cuervo fanatic. The odd man out is Lisandro Alonso, the director, who looks at them incredulously while they paint little signs. "We want the other Cup," they scribble and raise their pamphlets on any stage. They even invent ghost stories to ask people to buy a square meter; they dream of returning to Boedo. And from Boedo, we go back to Jauja.

It's a different movie, but from your standpoint, it could be linked with The Road, right?

Being this character, a man of the 19th century, he has a different logic. But also an analytical way of confronting obstacles in order to find a solution. And also, there's the fear, in both of them, of losing the child. And sometimes the clumsiness of a man who after all is not made for that strange, rocky landscape in Jauja, [or] the destroyed one in The Road. What I like about drama is putting an ordinary man in an extraordinary situation. It's the basis of drama.

What past did you invent for this Captain Dinesen?

I took things from another Dinesen. A writer and adventurer who also went to the New World at the end of the 19th century. A hunter, he was the father of Isak Dinesen whose real name was Karen Blixen. I took things from my grandfather, my father's accent and since I know something about the history of Denmark and Argentina, I could link them. Milkibar, Bigliardi's character, is a version of Lucio V. Mansilla. Dinesen is a quixotic version of that adventurer and a little of my grandfather and father at the same time.

You produce, you made the music, you sing a song…

It's a very popular song that was written in 1848, the first war between the Danes and the Prussians, which Denmark won. Later, in '64, Prussians, Austrians and Hungarians massacred the Danes and they kept the south of the territory. They still have it. The words of that song are still learned in schools.

What do characters like this, put in extreme situations, offer you?

Inevitably they get me thinking about death. Some tell jokes, some get depressed or can't wait for it and shoot themselves. I understand. It's a concern. One of my first memories as a boy was realizing that animals die and therefore people do. It seemed very unfair to me and I'm sure that I traumatized my parents with these questions.

How much of your knowledge comes from film?

I went to college, but I've learned much more doing cinema. Filming is the least of it. For example, I did detective work to find the books that Freud liked to read. Cronenberg saw me arrive with suitcases full of books and objects and we shared opinions back and forth, things that we were learning. Talking with Cronenberg, or with Lisandro or Fabián, it's like working with another actor; they have the same point of view. We explore.

Will you work together again?

I´m sure we will; we get along very well.

How much does getting along well matter in your work?

I like to work with friends, but when I look for something to do, I don´t hope for happiness. I ask myself whether it's interesting, if I'm going to learn something and, above all, if it's something I would like to see.

Do you recommend Jauja to the San Lorenzo supporter?

They are going to think it´s weird. But it´s beautiful to see. And there are scenes that belong to classic cinema. Lisandro is going to have a bigger audience with this film.

Are you going to Morocco? Any prediction?

I will go to see the final. I hope it´s between Real Madrid and San Lorenzo. At the moment, there´s an obvious difference between the level of the game and the spirits of these two teams. However, since the supposed experts don´t expect anything from Ciclón, and knowing the famous resilience and strange luck of the Cuervo teams, this is just perfect for us. We don´t have any pressure. We have good players. Real Madrid doesn´t even have us in their radar. Just as well. Torrico is a great goalkeeper. If we defend well and the Merengues [tr. note: Real Madrid nickname], especially Cristiano Ronaldo, during the first twenty minutes get frustrated in the attack, San Lorenzo will be able to gather momentum from the back and surprise with a well-built attack by Pipi Romagnoli, who will come back healthy and well-focused for the matches in Morocco.

"Viggo knows he took a risk"

"I´m excited that Viggo is in it. He knows he took a risk, he likes it. He is opening the field for another audience to come to see the film," says Lisandro Alonso, Director of Jauja, a prominent figure here in Mar del Plata.

It´s a film less "weird" than your previous ones, but with some supernatural elements.

That comes from the hand of Fabián Casas. His contribution through his writing. He invents characters, names, metaphysical apparitions.

Will you continue with professional actors?

To begin with Viggo was a luxury; his experience gives me confidence. I needed him; there´s loss, drama in this story.

The Captain´s Danish nationality, was it to attract Viggo?

It was useful. In the beginning, the character was English but it pissed me off that he´d remain attached to the past of our Patagonia. When Fabián told me that Viggo spoke Danish, had a Danish passport, a Danish father, I said yes, he´s Danish.

How did the story and the duo you created begin?

I had a female friend who fell in love with a guy and she went to live in the Philippines. Years later, I received an e-mail. She had been shot dead, she and the boyfriend. A day before, she had written telling me that she was in love. I wondered how the thing could happen like that, so suddenly. And I thought about her dad, who was from Slovenia. Going so far away to get the body of his daughter. It stayed with me. In a Pizzeria, with Fabián, I threw the idea to him. We didn´t know each other. He had doubts, and we agreed we would try to become friends; if we did, we would proceed with the story. And we spent two years eating asados, our wives became pregnant, until time passed and we said, "Hey, shall we start writing?"