Viggo Mortensen: "People don't think of me only as Aragorn."

By Àlex Montoya - translated by Ollie and Zoe 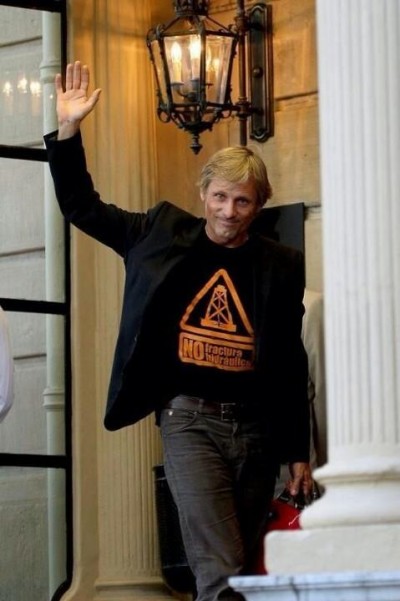 San Sebastian Film Festival - September 2014.
© Arizmendi.
He's exhausted with his travels and the contractual obligations that come with the promotion of three films (three!!) at the same time - combining phone interviews where he talks about the French film Loin des hommes and the U.S. Captain Fantastic - with the ones from those of us who cover San Sebastian. But he looks impeccable, and his attitude... typical of the anti-star, the furthest thing from a star that probably exists in the film world. Viggo Mortensen [New York, 1958] presented Jauja in the Horizontes Latinos section. Winner of the FIPRESCI prize in Un Certain Regard in Cannes, the most recent film of the Argentinean Lisandro Alonso, although narratively a little disconcerting, takes us on a journey to Patagonia in the late nineteenth century and offers the viewer a very stimulating aesthetic experience. The actor shares a moment with FOTOGRAMAS and talks about his film, which will reach screens next December and of his taste for adventure and the game of acting.

Quite an adventure, Jauja…

I like Jauja; it's a good film: the challenge, the road map, the script, or rather Lisandro's idea... I am friends with the co-screenwriter (he is referring to Fabián Casas, poet, writer and Mortensen's partner in the blog, www.sobrevueloscuervos.com, where they talk about philosophy, literature, cinema … and soccer). I already knew Lisandro's films and they interested me. I knew that he never worked with actors but that this time he did want to do it. And that he has a very different, singular, beautiful outlook. I joined up and contributed all I could and together we achieved something essential in the moment of creating a work, which is to provide universal value from the details, from being precise.

Lisandro Alonso says that, during the shoot, you'd knock on his door at 7:30 in the morning to suggest ideas to him. Are you an interventionist actor who constantly contributes ideas?

Yes, you have a limited window of time to say something that you hope lasts and you have to make the most of the opportunity. And with an open director, like Lisandro, it's much easier. He can make use of whatever he likes. I've worked with insecure filmmakers who are distrustful, rigid and you have to put up with them and comply with what they want. But I prefer those who listen; I have more fun. In any case, I think that the important thing for an actor is being flexible. There are very good actors who prepare very well technically on their own and who are not going to change. I think it's a shame for them; they miss out on the most beautiful thing about the job - playing, being open and ready to respond to what others offer you. It's more fun and the gifts that the profession gives you don't come to you if you aren't flexible.

Jauja is an example of this will to play that sometimes can baffle those who follow your career.

I don´t plan it, but I guess that sometimes I´ve made some bewildering career choices. I´ve never made any particular effort to change course with each film. I like to take part in adventures like this one (Jauja was filmed in Patagonia, with a very small and practically incommunicado team.) Since I was a child, I´ve always liked to travel and I´ve approached different cultures that have made me more open. And the actor who is not open is very limited, because it´s necessary to want to understand the point of view of the character you are playing, that sometimes is very different from yours… The actor´s job is to keep that flexibility.

In the United States, they do all kinds of things. Although the studio system is more complicated, because they try to please the maximum possible audience and raise the biggest amount of money possible. And pleasing so many people makes it difficult to make a unique product that has depth and substance. Perhaps Cronenberg would be one of the few that achieves it; Eastern Promises as well as A History of Violence were studio films, but with their own personality. David always makes the film he wants to make, changing registers and genres. It's possible, but you need a director with enough strength to keep his vision against all odds.

It's strange because you are completely the opposite of a star, and in your filmography, there aren't too many titles that would qualify you as such, but the treatment that you receive in the street is that of a star. Aragorn's shadow is long…

It's normal. Millions of people saw The Lord of the Rings, a saga that's given me many opportunities. Anyway, there's a good indicator of how people see me: when I go out on the street when I'm at a festival like this and they give me photos to sign, I pay attention to what they are. And before there were more of Aragorn than there are now. Things have changed and you find everything, from photos of Alatriste to The Road to Appaloosa.. People don't only think of me as Aragorn, although I'm conscious that the first thing they think of is Aragorn.