The Lord of the Roles

By Pamela Biénzobas - translated by Ollie and Zoe

Source: In-LAN
The actor arrives with Jauja, the acclaimed film from the Argentine Lisandro Alonso which premieres in September [sic]. In it, the soccer fan artist who, before being Aragorn in Lord of the Rings, was a poet as well as a truck driver, reacquaints himself with the Patagonia of his childhood.

"We want the cup" said the hand-painted poster that Viggo Peter Mortensen Jr. [New York, 1958] hoisted in front of the cameras every time he could at the last Cannes Festival. It didn't matter if he was wearing the obligatory tuxedo on the red carpet or if he was up on stage for the world premiere of Jauja, the film from the Argentinian Lisandro Alonso in which the actor is not only the lead character, but also the producer and the musician.

Film and soccer, the perfect combination for Mortensen. And in Jauja, the two things were mixed together in an ideal way. Heading up the project was Alonso (responsible for films like La libertad [Freedom] and Los muertos [The Dead]) and Fabián Casas, a close friend with whom he's in charge of the blog www.sobrevueloscuervos.com. "The basis is San Lorenzo, but we talk about a lot of other things: philosophy, film, art, visits to the dentist… And San Lorenzo!" Mortensen says in perfect Spanish, the same guy that appeared timidly on the big screen in 1985 when he played an Amish farmer in the movie, Witness.

For most people Viggo Mortensen, with his 5'11", mysterious appearance and seductive image - a subject that he doesn´t appreciate much, - appeared on screen with the new millenium embodying the brave Aragorn in The Lord of the Rings. But before the popular saga that eventually elevated him to stardom, for years the actor had been playing supporting roles or betting on auteur films, like The Indian Runner (the film that marked the debut of Sean Penn as a director in 1991.) Mortensen was far from the usual circle of the great Hollywood stars. What´s more, he didn´t seem to wish - then or now - to be part of that world. With a perspective that has gone beyond the world of acting, his artistic interests cover a wide range, from photography to art, writing and music.

The life of the actor has been and is a mixture. Son of a Danish father and American mother, the boy was born in New York, but from early childhood he moved between the United States, Venezuela, Argentina and Denmark. He keeps a powerful bond with Argentina. And not only because of his beloved soccer club. "I always feel at home when I return to Argentina," he says.

Mortensen was eleven years old when his parents divorced and he returned - along with his two brothers, today both geologists - from Argentina to New York. At Watertown High School, he would become a good student and a sports kid. Then he attended St. Lawrence University and after graduating, left for Denmark. There he was a writer of poetry as well as a flower vendor. Also a truck driver. In the Big Apple, he mixed employment in bars and restaurants with his acting classes. After three years of training, he joined the cast of Witness, a film starring Harrison Ford. Shortly thereafter, he moved to Los Angeles. From the motion picture capital, his career did nothing but rise.

After years of international success, Mortensen is now returning to his Latin origins. And he's doing it with Jauja, with the successful Argentine director, Lisandro Alonso, at the helm. The story focuses on a father and his fifteen year old daughter, both of Danish origin, who landed in the Argentine Patagonia during the 19th century. Then, the girl falls in love with a member of the company and runs away with him. That's when the anguished papa goes searching for her.

What did it mean to return to Argentina and film again in Spanish?

It's the fifth film that I've made in Spanish, but in this case it was quite special, because I am speaking Spanish the way my father did, with that strong accent that is a bit amusing for me. I was doing a scene and laughed and Lisandro didn't understand what was so funny. Besides, it was a landscape that I knew from my childhood. I learned to ride a horse there!

What connection did you feel with that landscape?

Jauja was special, because it was the countryside. There are places in Patagonia where I spent Christmas holidays. We always went camping for a week, sometimes two, and we went a long way in to fish with the car full of things. I remembered many beautiful scenes. I was ecstatic riding horseback, with a smile that no one could take from me. But I had to get rid of it when I was filming! 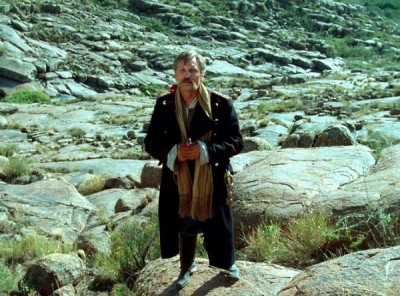 "It was a crew of about ten people walking over the rocks. We were all tired but we had a lot of fun. By nightfall, since we were 150 km from the internet and telephones, we made a little fire, an asado [tr. note: grilled meat], we talked... It was a family experience," says Mortensen, owner of a shy look and unhurried but incessant talk.

It's clear that the link with this production is not just an acting one. Lisandro Alonso speaks about this commitment: "Viggo is incredible. He has the triple role of actor, producer and musician and along with that, he was thinking about how to improve the film 24 hours a day. In addition he rigorously corrected every French, English and Danish subtitle. Also, from 7 until 2 in the morning he was all the time saying, "Uh, this or that occurred to me," to the point of saturating me a little, but in a good sense. I didn't want to think about the film anymore and on he went!"

Everything that happened with Jauja in Cannes was a surprise for Mortensen. The reason? He was not expecting that the film of a prestigious but not popular director would end up receiving the International Critics prize in the official selection called "Un Certain Regard." "We thought that some people were going to leave the theatre and say: 'What is that?! That's a really weird thing!' Others would say, 'Tarkovsky hasn't died! This is great!' It's a relief that the film reached people, that they feel inspired," said Mortensen. And almost immediately, he adds, "When we went up on the stage for the presentation, for a moment I thought like a producer and told myself, "I'm going to try to explain, to orient [the audience]. But then, I reconsidered - no, we're going to continue doing silly stuff and have fun. If you have to explain it, it's not worth it. It has to reach you or it doesn't."

The world as home

The film really captivated the Cannes audience, who quickly turned it into one of their favorites. For Mortensen, this year's experience reminds him of what happened in 2005 with the film A History of Violence from the director David Cronenberg. Then he also erroneously expected divided opinions. "In both cases it's auteur cinema with a quite singular, different point of view. The two of them take risks with the visual and the mise en scène. And the literary as well. What's unusual with Cronenberg is that when you see his films for the second time, things that appeared to be simple, take on more nuances; they get better. A History of Violence has a surface that seems very simple, but underneath is very, very complicated. Every time I see it, I like it more. It's a kind of existential western, like Jauja," he muses.

Existential and even surrealistic, as he describes the Patagonia adventure. Mortensen remembers that, before filming, "I only told Lisandro one thing: it doesn't matter where it occurs; it could be anywhere. Nor is it essential that it's understood perfectly. But if you want to create an artistic work with value, with universal meaning, you have to be specific, local, detailed."

Himself, on the other hand, does not try to cling to one single root, nor to the local. Perhaps that's why he can speak six languages. "The more I travel and the more I live, the more places there are in which I feel at home," he says with conviction "That seems very healthy to me for anybody, to avoid misunderstandings, wars, suffering, hunger... In part, the troubles of the world could be solved by moving closer to what seems very different, even hostile. It's simply a question of not holding to an idea of what something or someone is, but rather going to see what it is, how they are, what they are missing. Or what I am missing that they already know."
Top of this page
Last edited: 25 August 2014 13:17:46
© LAN.