Source: Premiere (France)
Hungry for extreme cinematic experiences, megastar Viggo Mortensen went off to lose himself in the depths of Patagonia in a contemplative, radical, metaphysical and somewhat hermetic western. 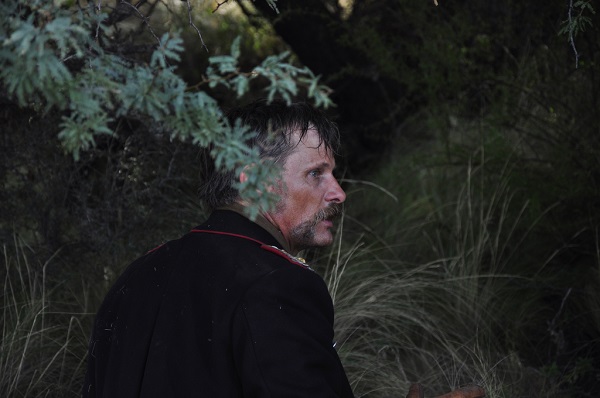 © 4L Productions.
The actor from the Lord of the Rings saga had been impressed by the radicalism of Los Muertos, a small, low-budget film by Lisandro Alonso. And radicalism, the Danish-American finds it here in a high dose. As in all of the Argentine's films, there is a slow, contemplative and arid wandering composed of long stationary shots in nature. Most often without music. And, of course, without dialogue, or almost. Because the purpose of the journey is to stimulate hypnosis, by the very length of the scenes, stretched to abstraction. We already see you leaving the room in thought, concerned at the advertisement of this caricature of pretentious 'festival film'. And frankly, we understand you a little, as it is true that this cutting austerity has something tiring or even a little affected and obscure, in so much as it is permanently displayed.

At the beginning, however, there is something intriguing enough in this story of a Danish military engineer pursuing his love-struck fifteen-year-old daughter, running away across Patagonia in the 19th century, while in the background a genocide of indigenous people is going on. Especially when the possessive and vengeful father has the unyielding face of Viggo Mortensen, as mysterious here as the Sphinx. So we see Viggo riding a horse. Then Viggo is hot. Viggo is thirsty. Viggo sleeps under the stars. Viggo pulls out his sword. Upon this silent warrior is projected the (slim) questions of the spectator – is he going to find his daughter? Will she be alive? In fact, he never eats, this Viggo. Are there no animals in Patagonia? But true to his style, Alonso takes care not to enlighten us, preferring to engulf us like his character in the cutting colors of the sublime landscapes.

Compacted into a quasi-square image format with rounded edges, like a Polaroid, nature does not arouse the burst of freedom of a space to conquer. Rather, it generates vague distress à la Gus Van Sant's Gerry, a sentiment of loss with an aspect of metaphysical enigma. At the bend of a fantastic grotto or a meeting in the middle of the desert with an Irish wolfhound, it even seems to want to say something, this sovereign nature of undecipherable design. But what, exactly? Frustration vies with fascination.