Skip navigation
Home
Viggo News
V-W Marketplace News
Articles
Interviews
Interviews 2014
Viggo's Five Tips
"The Cannes circus"
VM: "If LOTR can win 12 Oscars..."
In Cannes with VM about Jauja
VM: "I love the darkness..."
"It's women who made me want to be an actor."
The Interview - Actor, VM
The Lord of the Roles
VM: "People don't think of me only as Aragorn.&quo
VM: Film and Soccer Activist
Quotes
Viggo Gallery
Artists
Tolkien
Links
Buyer's Guide
Online Translators
Forums
Contact
Sitemap

Viggo Mortensen: "I love the darkness and immorality of The Two Faces of January"

By Thomas Agnelli – translated by Celine

Source: Premiere (France)
In the murky waters of Hossein Amini's The Two Faces of January, Viggo Mortensen plays the role of a fabulously rich American whose holiday in Greece with his young wife is being cut short. It is a new, complex and ambiguous role the actor is far from taking on half-heartedly. 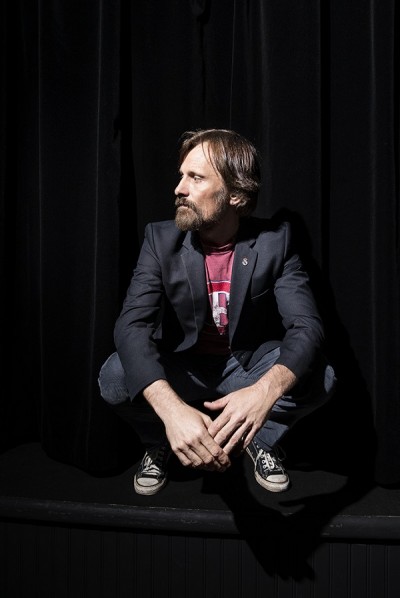 Photographed for Premiere magazine (France).
© Sebastien Vincent.
Premiere: Tell us honestly if you accepted The Two Faces of January just to be in the first feature length film of the Drive script writer?
Viggo Mortensen: No, and that's because I knew Hossein's work well before I saw Drive! 18 years ago he had already written the script for Michael Winterbottom's Jude. A quality sign. For years he had wanted to direct the adaptation of Patricia Highsmith's novel. You can't imagine all the hardship he went through, I was bluffed by his determination. The real surprise was how he mastered everything, and yet he was still open to suggestions. He knew how to tell a story, place his camera, direct actors, and create a relaxed atmosphere. Those who make their first feature length film, don't usually have as much experience.

When we watch the film, we are reminded of 1960 René Clement's Purple Noon (Plein Soleil)...
It has been claimed Patricia Highsmith published The Two Faces of January 9 years after The Talented Mr Ripley (which was inspired by Purple Noon.) And it wasn't as successful. The plot is also set in 1950s Europe, and the same questions are raised, amongst them, the way people from the old continent looked on the Americans. At that time the latter were prejudiced against. In the Europeans opinion they liked blowing money and travelling for the pleasure of it. Later, Richard Nixon damaged this image and changed the perception of the American abroad.

We also feel the atmosphere of the Hollywood film-noir from the 1940s. Do you like this genre?
No more than that. When Hossein came to introduce his project to me in 2010, he implied that he would respect the conventions of the film-noir and of the con-men films. I was never a big fan of this genre even if I can see a certain pleasure in the game, in the debate. To be convinced I needed to scratch below the surface so that I could understand what was at stake. Then Hossein told me: "These characters are neither good nor bad, they lie to each other, they think they can manipulate or have an ascendancy on the other; but in the end they lose." Straight away I was able to understand the film. I liked the psychological acuteness, the darkness, the immorality that was in the script and all of this immersed in a dream setting. Just like something left rotting away in the sun.

You didn't take part in David Cronenberg's last two films (Maps to the Stars and Cosmopolis.) Is there trouble in paradise between the two of you?
No, but David is a bit like me, he doesn't plan anything. He is more instinctive than theoretical. This is the reason why he has more difficulties than the other film directors. Producers don't like being disobeyed, and he takes pleasure in putting himself in danger, changing the story, the times, and the genre. Careerwise, with A Dangerous Method (2011) he took considerable risks. For that matter, journalists didn't fully understand what he was offering with this strange film. They thought that Keira Knightley was over doing it etc. I'm sure that in 10 years time the film will be re-evaluated just like ExistenZ (1999) was very under-estimated at the time. In fact this film made The Matrix out to be a Walt Disney film. This being said David never loses any money. He always finishes his film on time without going over budget and, more importantly, he makes good films. Where is the problem? [laughs].

Do you like to be faithful to certain film directors?
Yes. Well with Peter Jackson it was three films in one! In the 90s I acted in two magnificent films for Philip Ridley The Reflecting Skin (1990) and Darkly Noon (1996) It is beautiful to see how an artist develops, but we may lose touch with each other... Often, when go through with a fine toothcomb the filmography of some directors we realise they haven't shot a film for 10 years even though their films are excellent. For example you have Dreyer, who has been disconcerting in his time especially with The Passion of Joan of Arc (1928). This silent film was adopting all the codes of the talking film and the critics didn't understand what they were watching. After that, Dreyer had to wait 5 years before he could shoot a new film. 5 years! On this topic, it is funny, I realised that a new Peter Greenaway film was out in the French cinemas: Goltzius, and the Pelican Company. When The Cook, The Thief, His Wife and Her Lover (1989) and The Pillow Book (1997) went out on the screens the journalists were praising him to the skies. Today nobody notices him at all. These trends are mad, aren't they? On the other hand, you have Almodovar, who stays in the game even though his latest films are not really good. The Americans don't go and watch a lot of foreign films and they think there is no room for another Spanish film director. Same thing with the French cinema, in as much as there are only a couple of films that are released in the States. The last one to date was Intouchables (2011). Beside that...

You have just acted in Lisandro Alonso's Jauja that was in competition in the Un Certain Regard section at this year's Cannes. He is an Argentinian director of radical genre...
Lisandro and I have a friend in common, the poet Fabian Casas. While I was shooting in Argentina I paid him a visit and he told me he was writing a script for Lisandro. I had seen Los Muertos (2004) and I asked Fabian: "Isn't that guy a bit strange?" He answered me back: "He's everything but weird." When we met, Lisandro displayed some great shyness. He remains kind of unsociable until he gets to know you, but once you have broken the ice, you are surprised to discover how hilarious he can be. You don't necessarily see this in his films. He doesn't give a damn if he doesn't look cool. He is not part of these writers who claim they don't care what others think of them, and pretend they don't feel like going to the Cannes Festival while going flat out to get there. With Jauja Lisandro moves towards a clearer form, less enigmatic, more narrative - this time round there are dialogues. Well, when I say "narrative", it's relative, isn't it? We only had in our hands a script of 20 pages and I still didn't know what I was going to shoot.

You are renowned for being in mainstream films as well as in underground ones. In the end, which cinema do you feel more at ease with?
As an actor I realise that a film like The Two Faces of January fulfils my expectations. I love the way the psychology of the characters is elaborated, the balance of power or seductive power, the mind games, the things that are unmentioned. This may surprise you but the film I had most pleasure shooting remains Appaloosa (Ed Harris 2008). Probably because my character could communicate without talking. I have had to use these acting skills again in The Two Faces of January. On the set with Oscar [Isaac] and Kirsten [Dunst], we were sharing that same jubilation.

You seem to be a studious actor who attempts to cultivate your mind with each role. Is this the case?
Each time I'm looking for a new experience, something I don't know or know very little about. The Two Faces of January allowed me to discover the history of ancient Greece. I have no career plan, but I know I can allow myself to act in a very low budget film. Here, I've just acted in a French film, Loin des Hommes, directed by David Oelhoffen. It's adapted from an Albert Camus short story, The Guest. It's part of a collection entitled Exile and the Kingdom. It is set during the Algerian War. My knowledge on this topic was limited and I learned an awful lot, especially on Camus. I would have never read his diaries nor his letters if I hadn't accepted this role. I find him infinitely more honest that Jean Paul Sartre or Simone de Beauvoir. In fact I take each film as an opportunity to open a new door and then realise my ignorance.