Viggo on the Movie 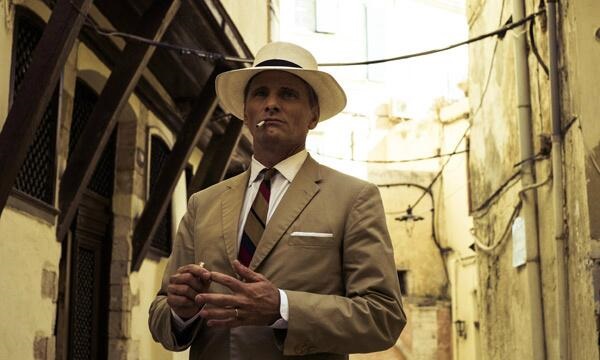 © StudioCanal.
All three characters start high up and glamorous, and we all get lowered in the end. - Viggo Mortensen


Viggo on the Movie

"I liked that suit because it's a great suit. It's an additional character in the story. It has its own transformation. By the time we get to the end of the movie the suit has its wrinkles, it's a little torn, a little soiled and it ends up in the dark and rain in Istanbul."

Viggo Mortensen talks The Two Faces Of January, singing with Fassbender and throwing a nappy at Al Pacino
by Tom Ward
GQ
16 May 2014

"It didn't feel like we were working with a first-time director at all. Hoss is really well-prepared, he's making the most of this opportunity. But he's also allowed everyone to contribute and make suggestions. He knows the story so well but he didn't mind it evolving either on set. He let us take chances and push it right to the line sometimes. I like that because it's unorthodox. It was always correct in terms of the dialogue and the period and the look but it's also human because it's surprising sometimes."

"His process is one of the best experiences I've ever had," says Mortensen famed for his roles in Lord of the Rings and A History of Violence. Here he plays Chester, a secretive man who takes Rydal into his murky world. "He got us altogether for a month, month and a half, to talk about the script. We could work out these things before shooting and ask questions about the characters. He was really open to changes that we felt were necessary. It was incredible for a director who has spent twenty years fine tuning his script to open up that process to us. It allowed us to work more smoothly and be more invested."

'What's great about it is that when you see it second time you see even more things about the character and the complexity of their relationships, most movies aren't as good the second time and you start to see flaws whereas here it is the opposite.'

'All three characters start high up and glamorous, and we all get lowered in the end.'

Mortensen, who described himself as a fan of Highsmith's, said he loved the film noir aspects of the story.

"It's a term that's thrown around a lot, it needs to have shadows, it needs to be black and white," he told reporters.

"The only thing I would say is that the characters need to lie and lose, and it needs to end badly for everyone." Mortensen said characters should always have a secret. "That's what the story's generally about: the masks, and the masks fall away, and what you end up seeing about these people is often ugly and embarrassing," he said. "But when it's well done, when the thriller aspect works in terms of storytelling, no matter how badly they behave you're on their side somehow. You don't want the cops to catch them."