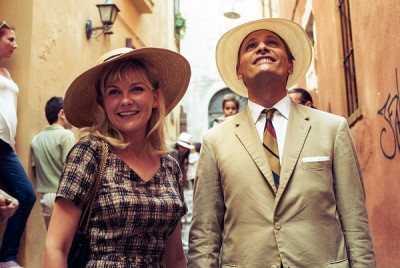 © StudioCanal.
Viggo really embraces the ugly side of characters… not a lot of stars do. - Dave McNary, Variety

"Viggo is a gorgeous man, so it wasn't that difficult to have chemistry with Viggo. He's really funny, which a lot of people wouldn't expect, and we had a really good time together."

"For me it was the story first," she said. "I loved the script and Viggo [Mortensen, her co-star] was attached already, and I've always wanted to work with him, so that's what drew me to be part of the film. Sometimes it's about the role for me, but most often it's about the actors I want to work with, the director and the story."

Dunst's Guide To Dressing
By Lauren Milligan
Vogue
15 May 2014

"(Viggo's) such a goofball, that's what I was most excited about, he's very funny and just likes having a good time."

"He's surprisingly hilarious. The first time I met him, he was reserved. It was in an elevator. I was like, 'Hi.' He was like, 'Oh, hi.' I learned later he was very shy. So I was nervous, even a little scared, to work with him. I thought, 'This is going to be intense.' Then I got the whole other side, which I don't think many people know. He should do comedy, I've told him that... I'm sure he wouldn't be happy with people knowing how funny he is."

The voice on the phone is husky, familiar, and just a little menacing. "I was told to call this number," the speaker says. I give a little shudder before realising it's Viggo Mortensen, calling as planned to talk about his new film, The Two Faces of January. Phew.

"Viggo really embraces the ugly side of characters… not a lot of stars do."