Source: Sunday Style
The Danish-American, 55, on swapping swords for suspense and why he still prefers to slip under the radar. 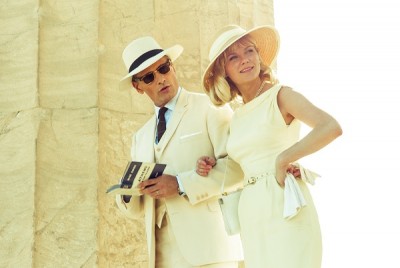 © StudioCanal.
Your new film, The Two Faces of January, is based on a novel by Patricia Highsmith, who also wrote The Talented Mr Ripley. Is it challenging creating an atmosphere of suspense when everyone already knows the ending?

Yes and no. Hossein's [Amini, the film's writer-director] screenplay stays very true to Highsmith's book. He really focused on creating highly complex characters, and that's where a lot of the film's suspense and intrigue comes from. And even though the setting and the time period is similar to Mr Ripley, I'd say this adaptation of Highsmith is more faithful to her sensibility.

It's a lot subtler.

Absolutely. It's similar to Mr Ripley in a lot of ways – the characters are all middle-class American tourists behaving badly in the early '60s – but The Two Faces is messier, more unpredictable, murkier. It's more of a true film noir story than Mr Ripley.

You play Chester MacFarland, a suave American who runs into trouble while holidaying in Greece with his wife, Colette. You're often cast as the hero who fights the forces of evil – was it refreshing to play a bad guy?

It was, but Chester isn't as simplistic as that. Yes, he's a villain in the sense that he's wronged people, but there's good in him. You're actually more embarrassed for him and the way he behaves. And his genuine affection for his wife – played by Kirsten [Dunst] – is his weakness. He wants to protect her above everything else.

Speaking of Kirsten, she said that, before she met you, she thought you'd be intimidating, but she was surprised by how "funny" you were. Were you intimidated by her?

[Laughs} There's always a bit of nervousness with things like this. Yeah, she's someone whose work I admire, so I hoped we'd get along. And we did. She's pretty funny herself, very funny. We laughed a lot during filming.

Your dedication to character research has been well documented. For Lord of the Rings you spent days hiking to the film's remote locations, in costume and carrying your sword. How did you research to play Chester?

I was mainly interested in what kind of generation he was from. I spoke with my father's friends, men who came of age during the Great Depression and served in WWII, like Chester. And that informed how he'd wear his clothes, how he'd speak, his gestures and his attitude towards women. The one thing about these men that I found most interesting was that, even at their most downcast, their appearance was paramount. Every day, they ironed their shirts and smoothed their hair, no matter what.

Chester does have an impressive collection of linen suits. What's your approach to fashion?

[Laughs] Oh, I'm much more sloppy. I mean, today, because I'm talking to you, I put in some effort and dressed in a clean shirt and nice jacket.

Is that unusual for you?

Yeah, I mean, I do take a bath every day [laughs] and I have good hygiene – I think. But I'm a lot more casual in the way that I dress.

Until LOTR, you managed to slip pretty much under the radar. Was it a tricky transition into fame after the first film came out?

It definitely took some getting used to. All of a sudden everyone is looking at you and paying you a lot of attention, and they think they know you because they know the character. I've never taken it for granted because, as you say, it came to me at a later stage in my career.

Which life do you prefer?

It's nice to have both. I mean, here we are in London, doing this interview. This is not a huge movie but, you know, it's a nicely made movie and there's a budget to do a proper press junket.

There are posters all over the tube stations…

Yeah, and we're in a nice hotel and I won't have to pay for this coffee we're drinking, and my hotel room is paid for and a man comes by in a car to pick me up to take me to do interviews. Once in a while, it's nice to go to a big city and have someone serve you dinner. But I like change; I like to mix things up. I don't like a lot of fanfare but, every now and then, it's nice.