Source: Berlingske Tidende
Viggo Mortensen is on his way towards the stars in Hollywood. The latest is that he has got a four million dollars fee for the leading male role in Demi Moore's latest movie. This Christmas he'll premiere in Denmark with Nicole Kidman and later on follows roles in movies with among others Sylvester Stallone and Faye Dunaway. 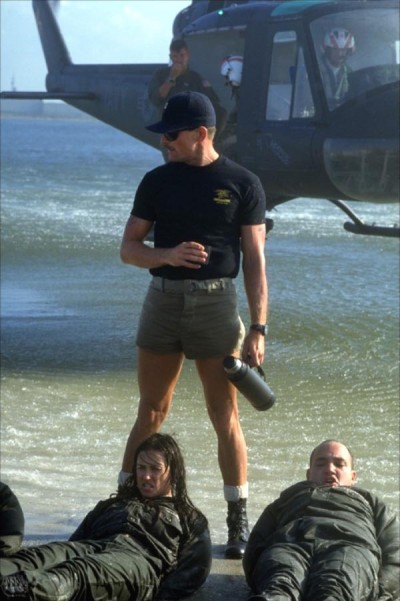 © Hollywood Pictures/Trap-Two Zero.
"It's a lovely day" the voice on Viggo Mortensen's answering machine sings - a place in the sun on Venice Beach and the Baywatch of the real life. California. Los Angeles. Hollywood. Viggo's world.

It's a happy song and that is understandable because the 37-year-old Viggo Mortensen is having such success. A lot has happened since the younger Viggo when he was 18-21 got the lowest agreed rates as a lorry driver in Glostrup, and was a dock worker in Copenhagen and a casual labourer in Ringsted.

Not that Viggo has changed much - actually he hasn't. He is still the shy, humble, almost self-effacing person. But Viggo's life has truly turned some somersaults. If we just limit ourselves to the moment then there are four movies in the pipeline.

Viggo with Nicole Kidman (Portrait of a Lady)

Have we got a Danish star in Hollywood?

According to Viggo himself the answer will be "no" because he'll never say such things: "I'm not the one who is selling the tickets. Nobody knows me," he mumbles. No, the new leading role in Hollywood doesn't like the limelight. And he doesn't attend receptions and he refuses to do interviews and things like that.

Viggo is in many ways an anti-star.

But according to the bare and objective facts the answer will in spite of that still be a "yes". According to Hollywood's own terminology he can easily write movie-star on his next card.

Viggo's uncles and aunts down in the Borup-area between Roskilde and Ringsted can easily be proud on behalf of the family. The same goes for Viggo's father who is also named Viggo Mortensen. He emigrated many years ago and now he enjoys his retirement and the success of his son on a farm in the northern part of New York state. But that is another story.

The story about Viggo junior is the simple but still complicated story about the first Dane in Hollywood's A-class. Via hard work and more than half a score of movies he has now landed straight in the arms of the big stars - Dunaway, Kidman, Moore…

The Oscar winner Jane Campion's Portrait of a Lady is premiering in Denmark this Christmas. In this movie Viggo is in love with Nicole Kidman.

Daylight with Stallone as the number-one-hero and Viggo as the second-hero is premiering next year. The same goes for Albino Alligator with Dunaway, Matt Dillon, Gary Sinise, Kevin Spacey - and Viggo. It's a so-called small movie where last year's Oscar winner, Spacey, will make his debut as a director.

Later on next year G.I Jane will premiere and that is definitely no small movie.

It is one of the really big Hollywood projects costing 60 million dollars.

That is almost the same as the minimum pay in the A-class, but things like that Viggo doesn't want to comment on: "You know what the pay is," he says with a linguistic perfect Danish under-statement.

He doesn't want to comment either on the otherwise pretty qualified gossip that his role was originally meant for Richard Gere:

"I don't know anything about that. Ridley Scott (the director) called and offered me the part. I didn't have to go to an audition or anything. Ridley and Demi had obviously decided it had to be me … "

Demi Moore went directly from the part as a stripper where she took off her cloths to the part in G.I. Jane where she takes off her hair to become a totally crew-cut soldier. In this new epic she is playing the first girl in the macho-famous Navy Seals.

Viggo is her superior, her coach, her Master Chief, as they call it. No, there's definitely no love story involved when Viggo drags Demi through the mud in the stinking warmth of South Carolina.

It's more like a mutual respect. And they do become friends in the end, Moore and Mortensen: "She is very talented. You learn a lot from working with the big …"

In the middle of all the business Viggo suddenly had to take a trip home to Denmark last month. His beloved grandmother died. He travelled home for the funeral in Borup:

"They have a hard time understanding that in Hollywood but my grandmother meant so much to me. I just had to go home …"

Since then Viggo has taken it easy. He has accepted another big movie, The Thin Red Line, for later this year. But he has also declined a lot.

He has always done that. There are parts that most people would have offered their right arm to get - but Viggo has just said no.

"At the moment I'm writing a new poetry collection that is going to be illustrated with my own pictures. There's no money in that, but it's important to me. Do you think they'll release a book like that in Denmark?" he asks cautiously.

Viggo does also have a small movie manuscript at Lars von Trier's Zentropa Film. He is also interested in getting a small part in a Danish film.

It doesn't have to depend on the money. When he is home he watches all the Danish films. He has never met any of his Danish colleagues, but he knows them from the cinema. Viggo is still a Dane in his heart.

When you become a dollar-millionaire, what will you do with your money then?

"Then I'll buy a forest. I feel better in nature. All that stuff with big villas in Beverly Hills that's not me at all," Viggo answered when B.T. asked him back in August 1995.

And what about now? Now you have become a millionaire?

"Well, I've already bought a little forest up in Idaho. Besides that I've just helped my friends and family. They helped me when I was poor …"

Viggo still lives in a rented house in Venice Beach. He is divorced and for a great part of the year he lives together with his 8-year-old son. His name is Henry, named after Viggo's grandfather at the farm in Borup. In this way the ring from Denmark has ended. From old Henry - to two times Viggo - to little Henry.

In Hollywood they say V-i-i-go Mo-o-rtensen. They suggested he changed his name but he declined that. Today it's no problem. All the big directors have learned his good Danish name.

Hollywood's new, very shy and mysterious star says that he became an actor "because I cannot stand to be myself all the time."

Look, that is a real acknowledgement. But it doesn't seem like that. In the middle of the success of his life Viggo is just being himself. And far more Middle-Zealand than Hollywood.
Top of this page
Last edited: 11 January 2014 16:03:27
© Berlingske Tidende.