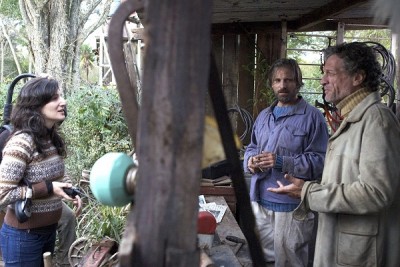 Image John Harris.
© Haddock Films.
In Ana Piterbarg's Everybody Has A Plan (Todos Tenemos Un Plan), set in the moody, atmospheric and lawless Tigre Delta area of her native Argentina, an enigmatic labyrinth of islands with their own sense of justice, every raindrop on every blade of grass seems to hold its own resonance (thanks to Lucio Bocelli's stunning cinematography). In a film as tough and moody as its charismatic lead actor Viggo Mortensen, we follow the subtle twists in the story of two quietly-spoken but driven men, both played by Mortensen, to striking effect.

The Lord of the Rings and Eastern Promises star, whose Spanish is impeccable – he spent the first ten years of his life in Argentina and returns regularly - has a meaty role as he plays troubled twin brothers who, grown apart, one living more simply in their childhood home of Tigre while the other has a more high-powered paediatrician job and snazzy flat in Buenos Aires, are forced back together by circumstance and the search for a more fulfilling life.

In the city, Agustín's life is a rather cosy one, and he is married to the equally successful Claudia, but his life and their relationship begins to unravel when she presses the issue of wanting to adopt a child. His response to this existential crisis is to lock himself in his study and refuse to come out. His wife leaves for a business trip and the following day his identical twin brother Pedro turns up out of the blue.

Pedro tells his brother he has a terminal illness and, in a snap decision, Agustín decides he has an opportunity to start over and inject some meaning back into his life so returns to the Tigre. This place is a breeding ground for criminals, outcasts and ex-cons and Agustín is soon entangled in his twin brother's criminal past and equally dangerous friendships. Ana Piterbarg, experienced in television but in her first foray into film, talks to Filmjuice's Shelley Marsden about this understated and atmospheric crime thriller...

Film as opposed to TV is virgin territory for you – how was it for you?
Hard work! It took a long time to do but I am really happy with the final result. There were a lot of challenges, one of which was that the movie became far 'bigger' than I'd expected it to be, in terms of expectations and my responsibility. The support I got from Viggo was very important – so that the main essence of the story didn't get lost.

How did your work in TV prepare you for your first film?
I think it helped that I was already used to working with very different actors; working every day with different personalities and ways of working. Each actor has his own personal method, so you have to try and work together.

What's Viggo like to work with, honestly?
He's a little obsessed. He's a little bit of a perfectionist, but then so am I so that's ok.

The obvious question now – how did you get Mr Mortensen on board?
When I started to write the story, I didn't have anybody in mind for the lead role. I think I remember speaking to my husband about Viggo as he'd grown up in Argentina as a child and we know him there almost as an Argentinian star. One day, I met him completely by chance at the front of San Lorenzo's club, because my son goes swimming there. I was brave, walked straight up to him and told him about my project. He was really nice - he wrote me down his address, I sent him the script and a few months later he sent me an email saying he wanted to do it.

As a twin myself I am very interested in your central characters being twins. With Pedro and Agustin, you manage to avoid the filmic and literary cliché of a good twin and a bad twin...
Thank you for thinking that... They are both neither wholly good or bad people. Maybe at the beginning you would think Pedro, the slightly lawless brother who lives in Tigre, is the bad guy, but then your opinion changes. They are complex people, like all of us. But I am interested in hearing about you and your twin now!

Haha! There is a scene in which Viggo appears as both brothers. Was it difficult to get right?
I worked together with the photographer to try and not make the artifice, the trickery, more important than the story. We wanted it to look like a normal, everyday scene – of course we used some tricks to achieve that naturalness. There were two challenges in having Viggo play two characters; the technical aspect of it and also how to depict Viggo, to show two characters that are different but at the same time believable as brothers with a common past. We shot one of the twins in Tigre first, then we shot the other scenes in the city, then the scene with 'both'. It was good for Viggo to shoot in this way, because when they met each other on screen he felt he really knew both brothers. And that was important because without Viggo's understanding of both brothers, the movie wouldn't have held up.

As a director, what drew you to the mysterious Tigre Delta area?
Two things, mainly: one, that the Tigre is very close to Buenos Aires but in many ways, couldn't be further away. Two, it's something to do with the population and the geography of the place, its labyrinth of rivers... People there live by a certain code, where privacy is fiercely protected. Something which enabled me to tell this story. I discovered this place when I was a child, but I also visited there a lot growing up.

You decided to film in the dead of winter – I'm sure that wasn't a popular move.
Not too much! It was tough on the cast, it was very cold. In summer, Tigre is completely different. It's a very nice holiday spot where people come with their families... it's another movie, in other words. But it was important to me to film in winter, it gave the film another ambience, the right ambience.

The cinematography in Everybody Has A Plan is incredible. It's almost like a character in itself...
Absolutely. We talked about this a lot with the director of photography and the art director, making the cinematography like another character. For me, the place adds something to each character. It's like nature maybe has some kind of message for them, I don't know.

What's your standout memory from filming?
Let me see... haha, well, you need to know that Viggo is a fan of San Lorenzo, an Argentinian soccer team, and I support another team, Boca Juniors (the best team in Argentina, by the way). So yes, one of the first days on set Viggo came along with a San Lorenzo flag and a Boca Juniors flag. Then he brought in other flags of various other Argentinian football clubs, Spanish clubs and then the rest of the world. By the end we had a shrine to football!

Have you got another project in the offing?
Listen, I barely know what I'm doing from one day to the next! No, I don't have another script right now. But I'm ready for anything, that's for sure.