On Location - The Two Faces of January 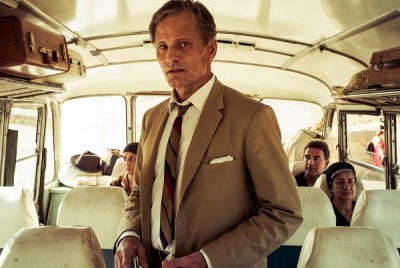 Viggo Mortensen is nothing if not adaptable. On the third take of this morning's scene, in which he meanders through an Athens flea market deep in conversation with Oscar Isaac (the slippery husband from Drive), an extra seems to have either lost track of her minimal part, been momentarily starstruck by the sight of Aragorn in a dapper white suit, or unwisely elected to go Method. Instead of turning away as has been carefully choreographed , she picks up a book at the stall where Mortensen's stroll is designated to take him. Without breaking character, the actor nonchalantly breaks off his dialogue and greets the unanticipated slowcoach. "Are you buying that?" he asks. She shakes her head, hands him the book and moves aside. With a nonchalant perusal of the tome, Mortensen picks up exactly where he left off. You would never know anything was amiss.

First-time director Hossein Amini strokes his chin, mulling over this pinch of improve, before nodding to his assistant director. "We're going again," the assistant director's voice carries to all 125 extras, crew and cast, which also includes Kirsten Dunst, who has been sashaying ahead of the two men. In take four the extra hits her marks impeccably, but the cinematographer spots the illicit use of a mobile phone and there comes a kind of collective sigh. By which time an inquisitive herd of goats saunters in to see what all the fuss is about and raid the bins. Oh, the glamour.

"All the fun of the fair," jokes producer Robyn Slovo unfazed. "We've been getting on pretty well. It's looking so good – Hossein is really stepping up." For erstwhile screenwriter Amini (Drive, 47 Ronin), taking on the highly adaptable Patricia Highsmith novel has been a passion project. "It's not like he wanted to direct," says Slovo. "He wanted to direct this."

We are not actually in Athens, but an ancient backstreet in Istanbul, fast proving a very adaptable city, having recently played Tehran for Argo, and now their touristy neighbour. In this non-Ripley Highsmith, Isaac's petty conman targets Mortensen's rich American, Chester MacFarland, and his pretty young wife, Colette (Dunst), for a quick drachma, as the debonair couple take a European tour. The shoot has already taken in the Minoan ruins on Crete and the Parthenon in Athens (the real one). True to Highsmith, this is a tale sunny in clime, but cold of heart.

"Chester is more than he seems," enthuses Mortensen, taking cover in a local café as a sudden downpour adds to the day's frustrations. "He is much more dangerous than he appears. It's all games, really subtle games, at this stage. That makes for such an interesting part. The gradual unpeeling – Chester has a lot of secrets." The seemingly immaculate Chester becomes consumed with jealousy and paranoia. Murder will spin everything on its head.

"It's one of her lesser-known books," concedes Slovo, who helped turn Tinker Tailor Soldier Spy into a hit and has become a sure hand for a literary thriller; Tinker's Working Title is backing the project. "But it still has that classic quality, that manipulation. In the title Highsmith is referring to the Two Faces of Janus – duplicity. You never know who you're seeing."