Source: Diario Libre
After having seen him in theatres in the super-production The Lord of the Rings or the Oscar nomination for Eastern Promises, it's difficult to imagine Viggo Mortensen... in Spanish. But speaking our language perfectly, he received us with a marked Argentine accent that's remained with him since his adolescence [sic], when he lived with his parents in Buenos Aires. And now that he knows the language of Hollywood so well, while in the United States, starring with Kristen Stewart and Kirsten Dunst in the film On the Road, he's also premiering, in other corners of the world, the film Todos Tenemos un Plan that he just shot in the same country in which he learned Spanish so well. 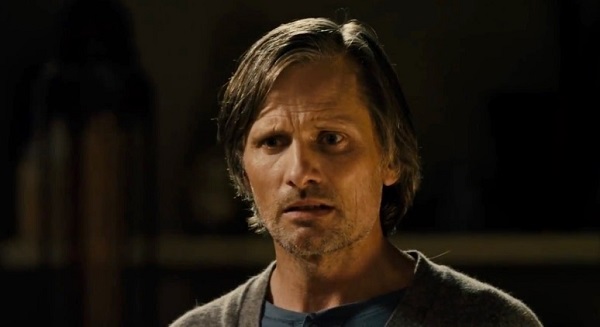 © 20th Century Fox.
When we met for the film Crimson Tide, in 1995, I remember that you spoke Spanish with an American accent and now you speak it perfectly - with an Argentine accent.
It's that 25 years had passed... I was speaking Spanish, but not much, because the first 10 years in the U.S., I spoke almost no Spanish. Later I moved to New York from Denmark and although I came across many Latinos in Los Angeles, I always spoke with everyone in English. Later, I spent some time in Spain and returned to Argentina after 25 years and regained the vocabulary and the accent. (Laughs) It came back just like [it was] when I was a child.

How was the return to Argentina, after so much time?
I loved it. I would not have made just any film to work in Argentina. I could have done that long ago. But the film Todos tenemos un plan was something very special, by being an Argentine production. It was like returning, in a certain way, to the experiences of childhood. I'd never worked there. So, it was good.

You've passed through Hollywood, Spain, Argentina. What part of the world is the dream about which you say, "This is what I've been missing?"
I think that there's a strong film industry in Azerbaijan and I have that on my list, but I don't know... I'll see what tomorrow brings. I've already learned you don't need to get anxious or search for things, because even though you don't want it, decisions are going to come up. You're going to have obstacles in life; you're going to have to make decisions all the time. We're not going to lack opportunities to change course, try new things and learn things.

What do you see in your career when you look at yourself in the mirror?
An absolute mess... (roars with laughter), a little of everything. And I don't know, because I'm speaking with the perspective of thirty years since I began as an actor. I don't know, really.

Was there anything in particular that led you to decide on acting?
A time came when I started to watch films as entertainment, because I liked them. And suddenly I asked myself, "How is that done?" I was living in Denmark, watching a lot of French, Japanese, Scandinavian movies, movies I hadn't seen before, with exceptional performances that made me feel different emotions... and that's also how the concept of 'How did they manage to move me, or make me think about my life in another way?' came to me. How films were made, technically, interested me.

And now that you're on the other side?
And now, I choose movies that suggest a plan in life: 'What is it that I want in life?' 'Is this the life that I want?' Suddenly, everything changes.

And in your case, did you achieve the lifestyle that you were hoping for?
Yes. I'm satisfied. I'm experiencing beautiful things; thanks to films I can present interesting stories.

And on a personal plane? Everybody has a plan. What was yours, initially?
Before being an actor, my plan was to travel, learn things. I grew up traveling a lot with my family. I kept on enjoying it and I think I will always enjoy travel, physically and mentally. And in film, I can do both.

Is there anything you would like to change in your life?
Right now, I'm not fighting with my life. I'm a fortunate person who has a beautiful job. Sometimes I get frustrated because things don't turn out as I'd like, but nothing more than that. You asked me what I see in the mirror... and the first thing I see is death. I see that I'm going to die, that I have to do things. It's not any kind of mental anguish, but rather that everything is changing very fast. When I run into someone I met in 2002 and he says, "Look at everything that happened in these last ten years!" Or you see your parents whose memories are already failing, and physically, people who are dying. I think that, without going crazy, you have to make the most of the good fortune of being alive.

Many people don't know that Viggo Mortensen is also a father. In the film, your character says, "I'm no good as a father." But really, it doesn't seem to be like that...
I like children, if that's what you're asking me.

In the period when you had your son, was it a little programmed or did you feel that typical doubt about being a good father, so much responsibility?
No, I don't think so. I was very involved, much more than other generations, than my father. I participated in the upbringing of my son.

Did you change diapers?
Yes, yes. I did all that. The first two years, his mom had to go on tour. She's a singer and after the first seven months, she began to work again and I was all alone with him - and fine. I had my moments like when the baby was crying for a while and I was going half crazy. You need help, mom should be here, someone should be here to help you. Because sometimes you start to feel that this is going to last forever, that he is always going to be a baby who's crying all the time, that it's never going to end and I'm not going to be able to read or work. But that's not true; it passes quickly. I always say to a friend who's having a baby: "Make the most of it because time goes by really fast." Suddenly he's ten years old and suddenly he's twenty-four and "Wow!"

Now that your son is pretty big, have you thought about grandchildren?
Well, if it happens, it happens, and that would be fine. No, I'm not eager, because things in life happen and...

A single friend who's thinking about having children said to me yesterday, "I'd love it if Viggo were the father of my daughter!" Are you aware of the sensitive feelings you inspire in the women who see you, beyond acting, as a sex symbol? Are you aware of that popularity?
It's not something that I think about all the time, but like all actors in this medium, I'd like people who think about me to like me, and not hate me.

A place in the Universe:
Boedo, Argentina.

A place in Hollywood:
Hollywood and Vine.

A place in your house:
The bathtub.

Your favorite ringtone:
The one they gave me.

A song:
Volvió una Noche [tr. note: "She returned one night" - a tango]

What do you keep in the drawer of your nightstand?
A notebook, a ballpoint and condoms.

What do you have in your bag or pocket right now?
A San Lorenzo medallion.

The best romantic evening?
The one that begins in a few hours.

Light off or on?
On

The first thing you do when you get up in the morning?
I think that I'm going to die.

The last thing you do before going to bed at night?
I know that I'm going to die.

Do you feel like filling in the ellipsis in "I am afraid..."
...of not making the most of life.

People think that I'm ...?
...if they aren't San Lorenzo supporters, they think I'm a halfwit.

I'd like them to know that...
...I love everyone no matter what team they're from.

The worst advice you've heard?
"No, not like that."

The best advice you've given?
"Yes, you can."